In combinatorics, the factorial number system, also called factoradic, is a mixed radix numeral system adapted to numbering permutations. It is also called factorial base, although factorials do not function as base, but as place value of digits. By converting a number less than n! to factorial representation, one obtains a sequence of n digits that can be converted to a permutation of n in a straightforward way, either using them as Lehmer code or as inversion table[1] representation; in the former case the resulting map from integers to permutations of n lists them in lexicographical order. General mixed radix systems were studied by Georg Cantor.[2] The term "factorial number system" is used by Knuth,[3] while the French equivalent "numération factorielle" was first used in 1888.[4] The term "factoradic", which is a portmanteau of factorial and mixed radix, appears to be of more recent date.[5]

The factorial number system is a mixed radix numeral system: the i-th digit from the right has base i, which means that the digit must be strictly less than i, and that (taking into account the bases of the less significant digits) its value to be multiplied by (i − 1)! (its place value).

From this it follows that the rightmost digit is always 0, the second can be 0 or 1, the third 0, 1 or 2, and so on. The factorial number system is sometimes defined with the 1! place omitted because it is always zero (sequence A007623 in OEIS). Conversely, a further unchanging zero digit may be added in the rightmost position for the 0! place.

(Note that the place value is one less than the radix position, which is why these equations begin with 5!.)

General properties of mixed radix number systems also apply to the factorial number system. For instance, one can convert a number into factorial representation producing digits from right to left, by repeatedly dividing the number by the place values (1, 2, 3, ...), taking the remainder as digits, and continuing with the integer quotient, until this quotient becomes 0.

For example, 46310 can be transformed into a factorial representation by these successive divisions:

The process terminates when the quotient reaches zero. Reading the remainders backward gives 341010!.

Here are the first twenty-four numbers, counting from zero. 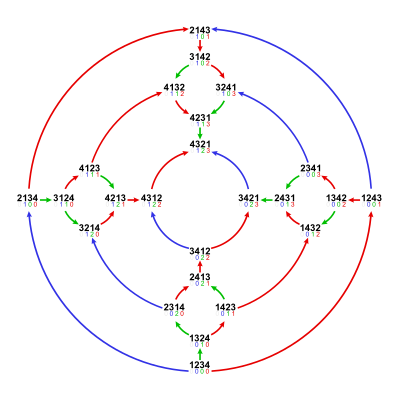 For another example, the greatest number that could be represented with six digits would be 543210! which equals 719 in decimal:

Clearly the next factorial number representation after 543210! is 1000000! which designates 6! = 72010, the place value for the radix-7 digit. So the former number, and its summed out expression above, is equal to:

The factorial number system provides a unique representation for each natural number, with the given restriction on the "digits" used. No number can be represented in more than one way because the sum of consecutive factorials multiplied by their index is always the next factorial minus one:

This can be easily proved with mathematical induction.

However, when using Arabic numerals to write the digits (and not including the subscripts as in the above examples), their simple concatenation becomes ambiguous for numbers having a "digit" greater than 9. The smallest such example is the number 10 × 10! = 3628800010, which may be written A0000000000!, but not 100000000000! which denotes 11!=3991680010. Thus using letters A–Z to denote digits 10, ..., 35 as in other base-N make the largest representable number 36! − 1=37199332678990121746799944815083519999999910. For arbitrarily greater numbers one has to choose a base for representing individual digits, say decimal, and provide a separating mark between them (for instance by subscripting each digit by its base, also given in decimal). In fact the factorial number system itself is not truly a numeral system in the sense of providing a representation for all natural numbers using only a finite alphabet of symbols.

There is a natural mapping between the integers 0, ..., n! − 1 (or equivalently the numbers with n digits in factorial representation) and permutations of n elements in lexicographical order, when the integers are expressed in factoradic form. This mapping has been termed the Lehmer code (or inversion table). For example, with n = 3, such a mapping is

A natural index for the group direct product of two permutation groups is the concatenation of two factoradic numbers, with two subscript "!"s.

Unlike single radix systems whose place values are basen for both positive and negative integral n, the factorial number base cannot be extended to negative place values as these would be (−1)!, (−2)! and so on, and these values are undefined.

With this method, all rational numbers have a terminating expansion, whose length in 'digits' is less than or equal to the denominator of the rational number represented. This may be proven by considering that there exists a factorial for any integer and therefore the denominator divides into its own factorial even if it does not divide into any smaller factorial.

By necessity, therefore, the factoradic expansion of the reciprocal of a prime has a length of exactly that prime (less one if the 1/1! place is omitted). It can also be proven that the last 'digit' or term of the representation of a rational with prime denominator is equal to the difference between the numerator and the prime denominator.

There is also a non-terminating equivalent for every rational number akin to the fact that in decimal 0.24999... = 0.25 = 1/4 and 0.999... = 1, etc., which can be created by reducing the final term by 1 and then filling in the remaining infinite number of terms with the highest value possible for the radix of that position.

In the following selection of examples, spaces are used to separate the place values, otherwise represented in decimal, and the places whose values are always zero (1!, 0!, 1/1!) have been omitted. The rational numbers on the left are also in decimal:

There are also a small number of constants that have patterned representations with this method: