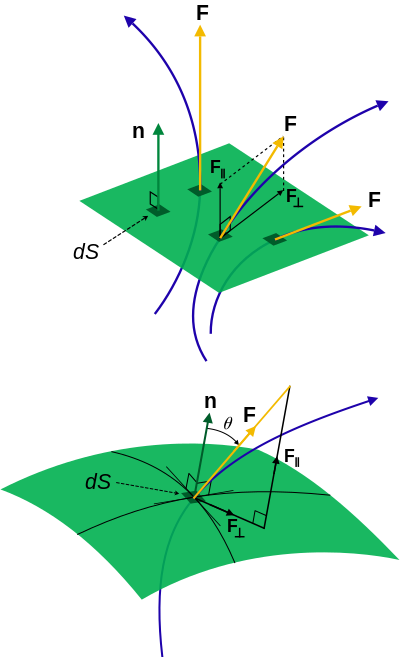 In the various subfields of physics, there exist two common usages of the term flux, each with rigorous mathematical frameworks. A simple and ubiquitous concept throughout physics and applied mathematics is the flow of a physical property in space, frequently also with time variation. It is the basis of the field concept in physics and mathematics, with two principal applications: in transport phenomena and surface integrals. The terms "flux", "current", "flux density", "current density", can sometimes be used interchangeably and ambiguously, though the terms used below match those of the contexts in the literature.

Origin of the term

The word flux comes from Latin: fluxus means "flow", and fluere is "to flow".[1] As fluxion, this term was introduced into differential calculus by Isaac Newton.

In transport phenomena (heat transfer, mass transfer and fluid dynamics), flux is defined as the rate of flow of a property per unit area, which has the dimensions [quantity]·[time]−1·[area]−1.[2] For example, the magnitude of a river's current, i.e. the amount of water that flows through a cross-section of the river each second, or the amount of sunlight that lands on a patch of ground each second is also a kind of flux.

In this definition, flux is generally a vector due to the widespread and useful definition of vector area, although there are some cases where only the magnitude is important (like in number fluxes, see below). The frequent symbol is j (or J), and a definition for scalar flux of physical quantity q is the limit:

is the flow of quantity q per unit time t, and A is the area through which the quantity flows.

For vector flux, the surface integral of j over a surface S, followed by an integral over the time duration t1 to t2, gives the total amount of the property flowing through the surface in that time (t2 − t1):

The area required to calculate the flux is real or imaginary, flat or curved, either as a cross-sectional area or a surface. The vector area is a combination of the magnitude of the area through which the mass passes through, A, and a unit vector normal to the area,

One could argue, based on the work of James Clerk Maxwell,[3] that the transport definition precedes the more recent way the term is used in electromagnetism. The specific quote from Maxwell is:

In the case of fluxes, we have to take the integral, over a surface, of the flux through every element of the surface. The result of this operation is called the surface integral of the flux. It represents the quantity which passes through the surface.

Eight of the most common forms of flux from the transport phenomena literature are defined as follows:

As mentioned above, chemical molar flux of a component A in an isothermal, isobaric system is defined in Fick's law of diffusion as:

where the nabla symbol ∇ denotes the gradient operator, DAB is the diffusion coefficient (m2·s−1) of component A diffusing through component B, cA is the concentration (mol/m3) of component A.[6]

This flux has units of mol·m−2·s−1, and fits Maxwell's original definition of flux.[3]

, and the absolute temperature T by

where the second factor is the mean free path and the square root (with Boltzmann's constant k) is the mean velocity of the particles.

In turbulent flows, the transport by eddy motion can be expressed as a grossly increased diffusion coefficient.

In quantum mechanics, particles of mass m in the quantum state ψ(r, t) have a probability density defined as

Then the number of particles passing perpendicularly through unit area of a cross-section per unit time is the probability flux;

This is sometimes referred to as the probability current or current density,[7] or probability flux density.[8]

Flux as a surface integral

The flux visualized. The rings show the surface boundaries. The red arrows stand for the flow of charges, fluid particles, subatomic particles, photons, etc. The number of arrows that pass through each ring is the flux.

As a mathematical concept, flux is represented by the surface integral of a vector field,[9]

where F is a vector field, and dA is the vector area of the surface A, directed as the surface normal.

The surface normal is directed usually by the right-hand rule.

Conversely, one can consider the flux the more fundamental quantity and call the vector field the flux density.

See also the image at right: the number of red arrows passing through a unit area is the flux density, the curve encircling the red arrows denotes the boundary of the surface, and the orientation of the arrows with respect to the surface denotes the sign of the inner product of the vector field with the surface normals.

If the surface encloses a 3D region, usually the surface is oriented such that the influx is counted positive; the opposite is the outflux.

If the surface is not closed, it has an oriented curve as boundary. Stokes' theorem states that the flux of the curl of a vector field is the line integral of the vector field over this boundary. This path integral is also called circulation, especially in fluid dynamics. Thus the curl is the circulation density.

We can apply the flux and these theorems to many disciplines in which we see currents, forces, etc., applied through areas.

and one for the D-field (called the electric displacement):

This quantity arises in Gauss's law – which states that the flux of the electric field E out of a closed surface is proportional to the electric charge QA enclosed in the surface (independent of how that charge is distributed), the integral form is:

where ε0 is the permittivity of free space.

If one considers the flux of the electric field vector, E, for a tube near a point charge in the field the charge but not containing it with sides formed by lines tangent to the field, the flux for the sides is zero and there is an equal and opposite flux at both ends of the tube. This is a consequence of Gauss's Law applied to an inverse square field. The flux for any cross-sectional surface of the tube will be the same. The total flux for any surface surrounding a charge q is q/ε0.[12]

In free space the electric displacement is given by the constitutive relation D = ε0 E, so for any bounding surface the D-field flux equals the charge QA within it. Here the expression "flux of" indicates a mathematical operation and, as can be seen, the result is not necessarily a "flow", since nothing actually flows along electric field lines.

The magnetic flux density (magnetic field) having the unit Wb/m2 (Tesla) is denoted by B, and magnetic flux is defined analogously:[10][11]

with the same notation above. The quantity arises in Faraday's law of induction, in integral form:

The time-rate of change of the magnetic flux through a loop of wire is minus the electromotive force created in that wire. The direction is such that if current is allowed to pass through the wire, the electromotive force will cause a current which "opposes" the change in magnetic field by itself producing a magnetic field opposite to the change. This is the basis for inductors and many electric generators.

Using this definition, the flux of the Poynting vector S over a specified surface is the rate at which electromagnetic energy flows through that surface, defined like before:[11]

The flux of the Poynting vector through a surface is the electromagnetic power, or energy per unit time, passing through that surface. This is commonly used in analysis of electromagnetic radiation, but has application to other electromagnetic systems as well.

Confusingly, the Poynting vector is sometimes called the power flux, which is an example of the first usage of flux, above.[13] It has units of watts per square metre (W/m2).