The focal point F and focal length f of a positive (convex) lens, a negative (concave) lens, a concave mirror, and a convex mirror.

For a thick lens (one which has a non-negligible thickness), or an imaging system consisting of several lenses and/or mirrors (e.g., a photographic lens or a telescope), the focal length is often called the effective focal length (EFL), to distinguish it from other commonly used parameters:

In general, the focal length or EFL is the value that describes the ability of the optical system to focus light, and is the value used to calculate the magnification of the system. The other parameters are used in determining where an image will be formed for a given object position.

For the case of a lens of thickness d in air, and surfaces with radii of curvature R1 and R2, the effective focal length f is given by:

where n is the refractive index of the lens medium. The quantity 1/f is also known as the optical power of the lens.

The corresponding front focal distance is:[3]

and the back focal distance:

is the radius of curvature of the mirror's surface.

Camera lens focal lengths are usually specified in millimetres (mm), but some older lenses are marked in centimetres (cm) or inches.

Focal length (f) and field of view (FOV) of a lens are inversely proportional. For a standard rectilinear lens, FOV = 2 arctan (x / (2f)), where x is the diagonal of the film.

When a photographic lens is set to "infinity", its rear nodal point is separated from the sensor or film, at the focal plane, by the lens's focal length. Objects far away from the camera then produce sharp images on the sensor or film, which is also at the image plane. 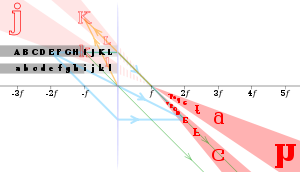 Images of black letters in a thin convex lens of focal length f are shown in red. Selected rays are shown for letters E, I and K in blue, green and orange, respectively. Note that E (at 2f) has an equal-size, real and inverted image; I (at f) has its image at infinity; and K (at f/2) has a double-size, virtual and upright image.

To render closer objects in sharp focus, the lens must be adjusted to increase the distance between the rear nodal point and the film, to put the film at the image plane. The focal length (

), the distance from the front nodal point to the object to photograph (

), and the distance from the rear nodal point to the image plane (

) are then related by:

must be increased. For example, consider a normal lens for a 35 mm camera with a focal length of

. To focus a distant object (

), the rear nodal point of the lens must be located a distance

from the image plane. To focus an object 1 m away (

), the lens must be moved 2.6 mm farther away from the image plane, to

A lens with a focal length about equal to the diagonal size of the film or sensor format is known as a normal lens; its angle of view is similar to the angle subtended by a large-enough print viewed at a typical viewing distance of the print diagonal, which therefore yields a normal perspective when viewing the print;[6] this angle of view is about 53 degrees diagonally. For full-frame 35 mm-format cameras, the diagonal is 43 mm and a typical "normal" lens has a 50 mm focal length. A lens with a focal length shorter than normal is often referred to as a wide-angle lens (typically 35 mm and less, for 35 mm-format cameras), while a lens significantly longer than normal may be referred to as a telephoto lens (typically 85 mm and more, for 35 mm-format cameras). Technically, long focal length lenses are only "telephoto" if the focal length is longer than the physical length of the lens, but the term is often used to describe any long focal length lens.