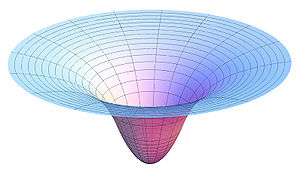 Plot of a two-dimensional slice of the gravitational potential in and around a uniform spherical body. The inflection points of the cross-section are at the surface of the body.

Some forces, including friction, air drag, and the magnetic force on a charged particle, depend on the particle's velocity as well as its position. Therefore these forces are not characterized by a force field.

Work done by a force field

As a particle moves through a force field along a path C, the work done by the force is a line integral