{{#invoke:Hatnote|hatnote}} {{#invoke:Infobox|infobox}} In geometry, a frustum[1] (plural: frusta or frustums) is the portion of a solid (normally a cone or pyramid) that lies between two parallel planes cutting it.

The term is commonly used in computer graphics to describe the three-dimensional region which is visible on the screen, the "viewing frustum", which is formed by a clipped pyramid; in particular, frustum culling is a method of hidden surface determination.

In the aerospace industry, frustum is the common term for the fairing between two stages of a multistage rocket (such as the Saturn V), which is shaped like a truncated cone. 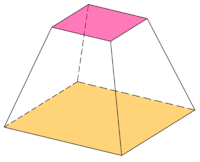 Each plane section is a floor or base of the frustum. Its axis if any, is that of the original cone or pyramid. A frustum is circular if it has circular bases; it is right if the axis is perpendicular to both bases, and oblique otherwise.

The height of a frustum is the perpendicular distance between the planes of the two bases.

Cones and pyramids can be viewed as degenerate cases of frusta, where one of the cutting planes passes through the apex (so that the corresponding base reduces to a point). The pyramidal frusta are a subclass of the prismatoids.

The volume formula of frustum of square pyramid was introduced by the ancient Egyptian mathematics in what is called the Moscow Mathematical Papyrus, written ca. 1850 BC.:

where a and b are the base and top side lengths of the truncated pyramid, and h is the height. The Egyptians knew the correct formula for obtaining the volume of a truncated square pyramid, but no proof of this equation is given in the Moscow papyrus.

where B1 is the area of one base, B2 is the area of the other base, and h1, h2 are the perpendicular heights from the apex to the planes of the two bases.

the formula for the volume can be expressed as a product of this proportionality α/3 and a difference of cubes of heights h1 and h2 only.

By factoring (h2−h1) = h, the height of the frustum, and α(h12 + h1h2 + h22)/3, and distributing α and substituting from its definition, the Heronian mean of areas B1 and B2 is obtained. The alternative formula is therefore

Heron of Alexandria is noted for deriving this formula and with it encountering the imaginary number, the square root of negative one.[1]

In particular, the volume of a circular cone frustum is 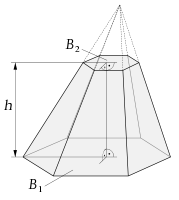 where a1 and a2 are the sides of the two bases.

For a right circular conical frustum[2]

where R1 and R2 are the base and top radii respectively, and s is the slant height of the frustum.

where a1 and a2 are the sides of the two bases.

1.^ The term "frustum" comes from Latin frustum meaning "piece" or "crumb". The English word is often misspelled as Template:Sic, a different Latin word cognate to the English word "frustrate".[3] The confusion between these two words is very old: a warning about them can be found in the Appendix Probi, and the works of Plautus include a pun on them.[4]