In mathematics, each closed surface in the sense of geometric topology can be constructed from an even-sided oriented polygon, called a fundamental polygon, by pairwise identification of its edges. 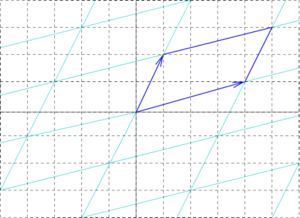 Fundamental parallelogram defined by a pair of vectors, generates the torus.

This construction can be represented as a string of length 2n of n distinct symbols where each symbol appears twice with exponent either +1 or −1. The exponent −1 signifies that the corresponding edge has the orientation opposing the one of the fundamental polygon.[1][2][3]

For the set of standard, symmetrical shapes, the symbols of the edges of the polygon may be understood to be the generators of a group. Then, the polygon, written in terms of group elements, becomes a constraint on the free group generated by the edges, giving a group presentation with one constraint.

Thus, for example, given the Euclidean plane

act on the plane as

, and the torus is given by the quotient space (a homogeneous space)

For the torus, the constraint on the free group in two letters is given by

. This constraint is trivially embodied in the action on the plane given above. Alternately, the plane can be tiled by hexagons, and the centers of the hexagons form a hexagonal lattice. Identifying opposite edges of the hexagon again leads to the torus, this time, with the constraint

describing the action of the hexagonal lattice generators on the plane.

In practice, most of the interesting cases are surfaces with negative curvature, and are thus realized by a discrete lattice

acting on the upper half-plane. Such lattices are known as Fuchsian groups.

An orientable closed surface of genus n has the following standard fundamental polygon:

This fundamental polygon can be viewed as the result of gluing n tori together, and hence the surface is sometimes called the n-fold torus. ("Gluing" two surfaces means cutting a disk out of each and identifying the circular boundaries of the resulting holes.)

is missing the superscript −1; this flip, as compared to the orientable case, being the source of the non-orientability). The (2n + 1)-fold crosscap is given by the 4n+2-sided polygon

That these two cases exhaust all the possibilities for a compact non-orientable surface was shown by Henri Poincaré.

The fundamental polygon of a (hyperbolic) compact Riemann surface has a number of important properties that relate the surface to its Fuchsian model. That is, a hyperbolic compact Riemann surface has the upper half-plane as the universal cover, and can be represented as a quotient manifold H/Γ where Γ is a non-Abelian group isomorphic to the deck transformation group of the surface. The cosets of the quotient space have the standard fundamental polygon as a representative element. In the following, note that all Riemann surfaces are orientable.

Here, d is a hyperbolic metric on the upper half-plane. The metric fundamental polygon is more usually called the Dirichlet region or the Voronoi polygon.

The above construction is sufficient to guarantee that each side of the polygon is a closed (non-trivial) loop in the manifold H/Γ. As such, each side can thus an element of the fundamental group

. In particular, the fundamental group

, with exactly one defining constraint,

The genus of the resulting manifold H/Γ is n.

In fact, this last construction works in generality: picking a point x, one then considers the geodesics between x and gx for g in Γ. Bisecting these geodesics is another set of curves, the locus of points equidistant between x and gx. The smallest region enclosed by this second set of lines is the metric fundamental polygon.

The area of the standard fundamental polygon is

Explicit expressions can be given for the standard polygons. One of the more useful forms is in terms of the group

associated with the standard polygon. For a genus

oriented surface, the group may be given by

. These generators are given by the following fractional linear transforms acting on the upper half-plane:

. The parameters are given by

It may be verified that these generators obey the constraint

which gives the totality of the group presentation.

In higher dimensions, the idea of the fundamental polygon is captured in the articulation of homogeneous spaces.