Günter Nimtz (born 22 September 1936) is a German physicist, working at the 2nd Physics Institute at the University of Cologne in Germany. He has investigated narrow-gap semiconductors and liquid crystals and was engaged in several interdisciplinary studies on the effect of non-ionizing electromagnetic radiation in biological systems. His international reputation mainly results from experiments that he claims show that particles may travel faster than the speed of light (c) when undergoing quantum tunneling. 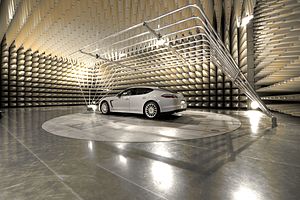 In 1993 Günter Nimtz and Achim Enders invented a novel absorber for electromagnetic anechoic chambers. It is based on a 10 nano meter thick metal film placed on an incombustible pyramidal carrier. Compared with the classical carbon foam absorber, it is not toxic, incombustible and environmentally compatible. The absorber is distributed by the Frankonia company,[1] patented and widely used on worldwide basis.

Professor Nimtz was consultant to the BAYER AG, to the Rheinmetall A.G., to the MERCK A.G./Darmstadt, and to the Feldmühle-Nobel A.G.. Between 2002 and 2007 he was a member of the Supervisory Board of ORMECON. Furthermore, he is Vicepresident of a Foundation for Disabled People.

Günter Nimtz and his coauthors have been investigating this subject since 1992 [2][3] Their preferred experimental setup involved microwaves either being sent across two space-separated prisms or through frequency-filtered waveguides. In the latter case either an additional undersized waveguide or a reflective grating structure had been used. In 1994 Günter Nimtz and Horst Aichmann carried out a tunneling experiment at the laboratories of Hewlett-Packard after which Nimtz stated that the frequency modulated (FM) carrier wave transported the 40th symphony of Wolfgang Amadeus Mozart 4.7 times faster than light due to the effect of quantum tunneling.

Diagram of the Nimtz and Stahlhofen double prism experiment. Photons can be detected behind the right-hand prism until the gap exceeds up to about one meter. Wavelength was 33 mm.

A paper published in 2006 by Profs. Alfons Stahlhofen and Günter Nimtz [4] described an experiment which sent a beam of microwaves towards a pair of prisms. The angle provided for total internal reflection and setting up an evanescent wave. Because the second prism was close to the first prism, some light leaked across that gap. The transmitted and reflected waves arrived at detectors at the same time, despite the transmitted light having also traversed the distance of the gap. This is the basis for the assertion of faster-than-c transmission of information.

Actually, Nimtz and coworkers observed that the measured tunneling time is spent at the barrier front, whereas inside the barrier zero time is spent.[5][6] This result was observed in several tunneling barriers and in various fields.[6] Zero time tunneling was already calculated by several theoreticians, some articles are cited in.[7]

Scientific opponents and their interpretations

Chris Lee has stated that there is no new physics involved here, and that the apparent faster-than-c transmission can be explained by carefully considering how the time of arrival is measured (whether the group velocity or some other measure).[8] Actually, these questions are well defined in the papers [2] and.[9]

Furthermore, recent papers by Herbert Winful were written in order to point out errors in Nimtz' interpretation.[10][4] According to these articles, far from contradicting special relativity, in reality Nimtz has rather provided a trivial experimental confirmation for it. Winful says that there is nothing specifically quantum-mechanical about Nimtz's experiment, that in fact the results agree with the predictions of classical electromagnetism (Maxwell's equations), and that in one of his papers on tunneling through undersized waveguides Nimtz himself had written "Therefore microwave tunneling, i.e. the propagation of guided evanescent modes, can be described to an extremely high degree of accuracy by a theory based on Maxwell's equations and on phase time approach."[10] (Elsewhere Nimtz has argued that since evanescent modes have an imaginary wave number, they represent a "mathematical analogy" to quantum tunnelling,[4] and that "evanescent modes are not fully describable by the Maxwell equations and quantum mechanics have to be taken into consideration." Since Maxwell's laws respect special relativity, Winful argues that an experiment which is describable using these laws cannot involve a relativistic causality violation (which would be implied by transmitting information faster than light). He also argues that "Nothing was observed to be traveling faster than light. The measured delay is the lifetime of stored energy leaking out of both sides of the barrier. The equality of transmission and reflection delays is what one expects for energy leaking out of both sides of a symmetric barrier."

Aephraim M. Steinberg of the University of Toronto has also stated that Nimtz has not demonstrated causality violation (which would be implied by transmitting information faster than light). Steinberg also uses a classical argument.[3] In a New Scientist article, he uses the analogy of a train traveling from Chicago to New York, but dropping off train cars at each station along the way, so that the center of the train moves forward at each stop; in this way, the speed of the center of the train exceeds the speed of any of the individual cars.[11] Herbert Winful argues that the train analogy is a variant of the "reshaping argument" for superluminal tunneling velocities, but he goes on to say that this argument is not actually supported by experiment or simulations, which actually show that the transmitted pulse has the same length and shape as the incident pulse.[10] Instead, Winful argues that the group delay in tunneling is not actually the transit time for the pulse (whose spatial length must be greater than the barrier length in order for its spectrum to be narrow enough to allow tunneling), but is instead the lifetime of the energy stored in a standing wave which forms inside the barrier. Since the stored energy in the barrier is less than the energy stored in a barrier-free region of the same length due to destructive interference, the group delay for the energy to escape the barrier region is shorter than it would be in free space, which according to Winful is the explanation for apparently superluminal tunneling.[12][13]

Apart from these interpretations further authors have published papers arguing that quantum tunneling does not violate the relativistic notion of causality, and that Nimtz's experiments (which are argued to be purely classical in nature) don't violate it either.[14] Oppositional theoretical interpretations are not cited in this reference, some of them are cited in.[14][15]

Nimtz and others argue that an analysis of signal shape and frequency spectrum has evidenced that a superluminal signal velocity has been measured[16] and that tunneling is the one and only observed violation of special relativity.[5][9] However - in contradiction to their opponents - they explicitly point out that this does not lead to a violation of primitive causality: Due to the temporal extent of any kind of signal it is impossible to transport information into the past. After all they claim that tunneling can generally be explained with virtual photons, the strange particles introduced by Richard Feynman and shown for evanescent modes by Ali and by Cargnilia and Mandel.[6][15] In that sense it is common to calculate the imaginary tunneling wave number with the Helmholtz and the Schrödinger equations as Günter Nimtz did in [9] and Herbert Winful did in .[17] However, Nimtz highlights that eventually the final tunneling time was always obtained by the Wigner phase time approach. In [6] and [9] Günter Nimtz outlines that such evanescent modes only exist in the classically forbidden region of energy. As a consequence they cannot be explained by classical physics nor by special relativity postulates: A negative energy of evanescent modes follows from the imaginary wave number, i.e. from the imaginary refractive index according to the Maxwell relation

for electromagnetic and elastic fields. In his latest publication [18] Günter Nimtz again explicitly points out that tunneling indeed confronts special relativity and that any other statement must be considered incorrect.

It was later claimed by the Keller group in Switzerland that particle tunneling does indeed occur in zero real time. Their tests involved tunneling electrons, where the group argued a relativistic prediction for tunneling time should be 500-600 attoseconds (an attosecond is one quintillionth of a second). All that could be measured was 24 attoseconds, which is the limit of the test accuracy.[19] Again, though, other physicists believe that tunneling experiments in which particles appear to spend anomalously short times inside the barrier are in fact fully compatible with relativity, although there is disagreement about whether the explanation involves reshaping of the wave packet or other effects.[12][13][20]

Nimtz interpretation is based on the following theory: The expression 1/[(hν)^2 - (pc)^2] in the Feynman photon propagator [21] means that a photon has the highest probability of traveling exactly at the speed of light (hν = pc), but it has nonvanishing probability to violate the laws of special relativity, as a “virtual photon”, over short time and length scales. While it would be impossible to transport information over cosmologically relevant time scales using tunneling (the tunneling probability is simply too small if the classically forbidden region is too large), over short time and length scales, the tunneling photons are allowed to propagate faster than light, in view of their property as virtual particles. The photon propagation probability is nonvanishing even if the photon’s angular frequency omega is not equal to the product of the speed of light c and the wave momentum p. [22][23] More details on signals and the described interpretation of the FTL tunneling experiments are found in reference 6 of.[24]

Although his experimental results have been well documented since the early 1990s, Günter Nimtz' interpretation of the implications of these results represents a highly debated topic,[25] which numerous researchers consider as incorrect (see chapter Scientific opponents and their interpretations). In [14] oppositional studies on zero time tunneling are omitted: Some of those are cited in.[7]