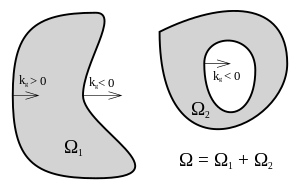 An example of complex region where Gauss-Bonnet theorem can apply. Shows the sign of geodesic curvature.

The Gauss–Bonnet theorem or Gauss–Bonnet formula in differential geometry is an important statement about surfaces which connects their geometry (in the sense of curvature) to their topology (in the sense of the Euler characteristic). It is named after Carl Friedrich Gauss who was aware of a version of the theorem but never published it, and Pierre Ossian Bonnet who published a special case in 1848.

is a compact two-dimensional Riemannian manifold with boundary

be the Gaussian curvature of

be the geodesic curvature of

where dA is the element of area of the surface, and ds is the line element along the boundary of M. Here,

is the Euler characteristic of

is piecewise smooth, then we interpret the integral

The theorem applies in particular to compact surfaces without boundary, in which case the integral

is the genus of the surface: Any orientable compact surface without boundary is topologically equivalent to a sphere with some handles attached, and

counts the number of handles.

If one bends and deforms the surface

, its Euler characteristic, being a topological invariant, will not change, while the curvatures at some points will. The theorem states, somewhat surprisingly, that the total integral of all curvatures will remain the same, no matter how the deforming is done. So for instance if you have a sphere with a "dent", then its total curvature is 4π (the Euler characteristic of a sphere being 2), no matter how big or deep the dent.

Compactness of the surface is of crucial importance. Consider for instance the open unit disc, a non-compact Riemann surface without boundary, with curvature 0 and with Euler characteristic 1: the Gauss–Bonnet formula does not work. It holds true however for the compact closed unit disc, which also has Euler characteristic 1, because of the added boundary integral with value 2π.

The theorem also has interesting consequences for triangles. Suppose M is some 2-dimensional Riemannian manifold (not necessarily compact), and we specify a "triangle" on M formed by three geodesics. Then we can apply Gauss–Bonnet to the surface T formed by the inside of that triangle and the piecewise boundary given by the triangle itself. The geodesic curvature of geodesics being zero, and the Euler characteristic of T being 1, the theorem then states that the sum of the turning angles of the geodesic triangle is equal to 2π minus the total curvature within the triangle. Since the turning angle at a corner is equal to π minus the interior angle, we can rephrase this as follows:

The sum of interior angles of a geodesic triangle is equal to π plus the total curvature enclosed by the triangle.

In the case of the plane (where the Gaussian curvature is 0 and geodesics are straight lines), we recover the familiar formula for the sum of angles in an ordinary triangle. On the standard sphere, where the curvature is everywhere 1, we see that the angle sum of geodesic triangles is always bigger than π.

A number of earlier results in spherical geometry and hyperbolic geometry over the preceding centuries were subsumed as special cases of Gauss–Bonnet.

The area of a hyperbolic triangle, conversely is proportional to its defect, as established by Johann Heinrich Lambert.

{{#invoke:main|main}} Descartes' theorem on total angular defect of a polyhedron is the polyhedral analog: it states that the sum of the defect at all the vertices of a polyhedron which is homeomorphic to the sphere is 4π. More generally, if the polyhedron has Euler characteristic

(where g is the genus, meaning "number of holes"), then the sum of the defect is

This is the special case of Gauss–Bonnet, where the curvature is concentrated at discrete points (the vertices).

There are several combinatorial analogs of the Gauss–Bonnet theorem. We state the following one. Let

be a finite 2-dimensional pseudo-manifold. Let

denote the number of triangles containing the vertex

, the second sum is over the boundary vertices, and

is the Euler characteristic of

is a closed 2-dimensional digital manifold, the genus turns out [1]

indicates the number of surface-points each of which has

adjacent points on the surface. This is the simplest formula of Gauss–Bonnet theorem in 3D digital space.

An extremely far-reaching generalization of all the above-mentioned theorems is the Atiyah–Singer index theorem.

A generalization to 2-manifolds that need not be compact is Cohn-Vossen's inequality.