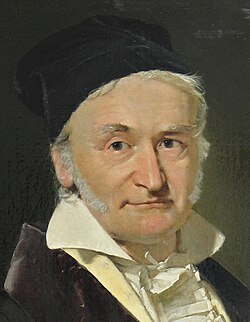 Gaussian units comprise a metric system of physical units. This system is the most common of the several electromagnetic unit systems based on cgs (centimetre–gram–second) units. It is also called the Gaussian unit system, Gaussian-cgs units, or often just cgs units.[1] The term "cgs units" is ambiguous and therefore to be avoided if possible: cgs contains within it several conflicting sets of electromagnetism units, not just Gaussian units, as described below.

The most common alternative to Gaussian units are SI units. SI units are predominant in most fields, and continue to increase in popularity at the expense of Gaussian units.[2][3] (Other alternative unit systems also exist, as discussed below.) Conversions between Gaussian units and SI units are not as simple as normal unit conversions. For example, the formulas for physical laws of electromagnetism (such as Maxwell's equations) need to be adjusted depending on what system of units one uses. As another example, quantities that are dimensionless (loosely "unitless") in one system may have dimension in another.

Gaussian units existed before the CGS system. The British Association report of 1873 that proposed the CGS contains gaussian units derived from the foot–grain–second and metre–gram–second as well. There are also references to foot–pound–second gaussian units.

{{#invoke:main|main}} The main alternative to the Gaussian unit system is SI units, historically also called the MKSA system of units for metre–kilogram–second–ampere.[2]

Some other unit systems are called "natural units", a category that includes atomic units, Planck units, and others.

SI units are by far the most common today. In engineering and practical areas, SI is near-universal and has been for decades,[2] while in technical, scientific literature (such as theoretical physics and astronomy), Gaussian units were predominant until recent decades, but are now getting progressively less so.[2][3]

Natural units are most common in more theoretical and abstract fields of physics, particularly particle physics and string theory.

(The quantity 4π appears because 4πr2 is the surface area of the sphere of radius r. For details, see the articles Relation between Gauss's law and Coulomb's law and Inverse-square law.)

A major difference between Gaussian and SI units is in the definition of the unit of charge. In SI, a separate base unit (the ampere) is associated with electrical phenomena, with the consequence that something like electrical charge (1 coulomb = 1 ampere × 1 second) is a unique dimension of physical quantity and is not expressed purely in terms of the mechanical units (kilogram, metre, second). On the other hand, in Gaussian units, the unit of electrical charge (the statcoulomb, statC) can be written entirely as a dimensional combination of the mechanical units (gram, centimetre, second), as:

where F is the repulsive force between two electrical charges, Q1 and Q2 are the two charges in question, and r is the distance separating them. If Q1 and Q2 are expressed in statC and r in cm, then F will come out expressed in dyne.

By contrast, the same law in SI units is:

where ε0 is the vacuum permittivity, a quantity with dimension, namely (charge)2 (time)2 (mass)−1 (length)−3, and ke is Coulomb's constant. Without ε0, the two sides could not have consistent dimensions in SI, and in fact the quantity ε0 does not even exist in Gaussian units. This is an example of how some dimensional physical constants can be eliminated from the expressions of physical law simply by the judicious choice of units. In SI, 1/ε0, converts or scales flux density, D, to electric field, E (the latter has dimension of force per charge), while in rationalized Gaussian units, flux density is the very same as electric field in free space, not just a scaled copy.

Since the unit of charge is built out of mechanical units (mass, length, time), the relation between mechanical units and electromagnetic phenomena is clearer in Gaussian units than in SI. In particular, in Gaussian units, the speed of light c shows up directly in electromagnetic formulas like Maxwell's equations (see below), whereas in SI it only shows up implicitly via the relation

In Gaussian units, unlike SI units, the electric field E and the magnetic field B have the same dimension. This amounts to a factor of c difference between how B is defined in the two unit systems, on top of the other differences.[4] (The same factor applies to other magnetic quantities such as H and M.) For example, in a planar light wave in vacuum, |E(r, t)| = |B(r, t)| in Gaussian units, while |E(r, t)| = c|B(r, t)| in SI units.

There are further differences between Gaussian and SI units in how quantities related to polarization and magnetization are defined. For one thing, in Gaussian units, all of the following quantities have the same dimension: E, D, P, B, H, and M. Another important point is that the electric and magnetic susceptibility of a material is dimensionless in both Gaussian and SI units, but a given material will have a different numerical susceptibility in the two systems. (Equation is given below.)

This section has a list of the basic formulae of electromagnetism, given in both Gaussian and SI units. Most symbol names are not given; for complete explanations and definitions, please click to the appropriate dedicated article for each equation. All formulas except otherwise noted are from Ref.[4]

Here are Maxwell's equations, both in macroscopic and microscopic forms. Only the "differential form" of the equations is given, not the "integral form"; to get the integral forms apply the divergence theorem or Kelvin–Stokes theorem.

Below are the expressions for the various fields in a dielectric medium. It is assumed here for simplicity that the medium is homogeneous, linear, isotropic, and nondispersive, so that the permittivity is a simple constant.

in Gaussian units and

in SI are both dimensionless, and they have the same numeric value. By contrast, the electric susceptibility

is unitless in both systems, but has different numeric values in the two systems for the same material:

Next, here are the expressions for the various fields in a magnetic medium. Again, it is assumed that the medium is homogeneous, linear, isotropic, and nondispersive, so that the permeability is a simple constant.

in Gaussian units and

in SI are both dimensionless, and they have the same numeric value. By contrast, the magnetic susceptibility

is unitless in both systems, but has different numeric values in the two systems for the same material:

The electric and magnetic fields can be written in terms of a vector potential A and a scalar potential φ:

In this table, the letter c represents the number 29,979,245,800 ≈ 3·1010, the numerical value of the speed of light expressed in cm/s. The symbol "↔" was used instead of "=" as a reminder that the SI and Gaussian units are corresponding but not equal because they have incompatible dimensions. For example, according to the top row of the table, something with a charge of 1 C also has a charge of (10−1 c) Fr, but it is usually incorrect to replace "1 C" with "(10−1 c) Fr" within an equation or formula, unless all other units in the formula are also replaced by their Gaussian equivalents.

It is surprising to think of measuring capacitance in centimetres. One useful example is that a centimetre of capacitance is the capacitance between a sphere of radius 1 cm in vacuum and infinity.

Another surprising unit is measuring resistivity in units of seconds. A physical example is: Take a parallel-plate capacitor, which has a "leaky" dielectric with permittivity 1 but a finite resistivity. After charging it up, the capacitor will discharge itself over time, due to current leaking through the dielectric. If the resistivity of the dielectric is "X" seconds, the half-life of the discharge is ~0.05X seconds. This result is independent of the size, shape, and charge of the capacitor, and therefore this example illuminates the fundamental connection between resistivity and time units.

A number of the units defined by the table have different names but are in fact dimensionally equivalent—i.e., they have the same expression in terms of the base units cm, g, s. (This is analogous to the distinction in SI between becquerel and Hz, or between newton metre and joule.) The different names help avoid ambiguities and misunderstandings as to what physical quantity is being measured. In particular, all of the following quantities are dimensionally equivalent in Gaussian units, but they are nevertheless given different unit names as follows:[8]

General rules to translate a formula

To convert any formula from Gaussian units to SI units, replace the quantity in the Gaussian column by the quantity in the SI column (vice versa to convert the other way). This will reproduce any of the specific formulas given in the list above, such as Maxwell's equations, as well as any other formula not listed.[9][10] For some examples of how to use this table, see:[11]