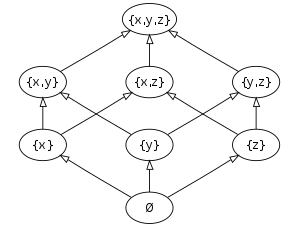 A power set, partially ordered by inclusion, with rank defined as number of elements, forms a graded poset.

In mathematics, in the branch of combinatorics, a graded poset is a partially ordered set (poset) P equipped with a rank function ρ from P to N satisfying the following two properties:

Graded posets play an important role in combinatorics and can be visualized by means of a Hasse diagram.

Some examples of graded posets (with the rank function in parentheses) are:

The lattice N5 can't be graded.

A bounded poset[3] admits a grading if and only if all maximal chains in P have the same length:[4] setting the rank of the least element to 0 then determines the rank function completely. This covers many finite cases of interest; see picture for a negative example. However, unbounded posets can be more complicated.

A candidate rank function, compatible with the ordering, makes a poset into graded poset if and only if, whenever one has x < z with z of rank n+1, an element y of rank n can be found with x ≤ y < z. This condition is sufficient because if z is taken to be a cover of x, the only possible choice is y = x showing that the ranks of x and z differ by 1, and it is necessary because in a graded poset one can take for y any element of maximal rank with x ≤ y < z, which always exists and is covered by z.

Often a poset comes with a natural candidate for a rank function; for instance if its elements are finite subsets of some base set B, one can take the number of elements of those subsets. Then the criterion just given can be more practical than the definition because it avoids mention of covers. For instance if B is itself a poset, and P consists of its finite lower sets (subsets for which with every one of its elements, all smaller elements are also in the subset), then the criterion is automatically satisfied, since for lower sets x ⊂ z there is always a maximal element of z that is absent from x, and it can be removed from z to form y.

In some common posets such as the face lattice of a convex polytope there is a natural grading by dimension, which if used as rank function would give the minimal element, the empty face, rank –1. In such cases it might be convenient to bend the definition stated above by adjoining the value –1 to the set of values allowed for the rank function. Allowing arbitrary integers as rank would however give a fundamentally different notion; for instance the existence of a minimal element would no longer be assured.

A graded poset (with positive integer ranks) cannot have any elements x for which arbitrarily long chains with greatest element x exist, as otherwise it would have to have elements of arbitrarily small (and eventually negative) rank. For instance, the integers (with the usual order) cannot be a graded poset, nor can any interval (with more than one element) of rational or real numbers. (In particular, graded posets are well-founded, meaning that they satisfy the descending chain condition (DCC): they do not contain any infinite descending chains.[5]) Henceforth we shall therefore only consider posets in which this does not happen. This implies that whenever x < y we can get from x to y by repeatedly choosing a cover, finitely many times. It also means that (for positive integer rank functions) compatibility of ρ with the ordering follows from the requirement about covers. As a variant of the definition of a graded poset, Birkhoff[6] allows rank functions to have arbitrary (rather than only nonnegative) integer values. In this variant, the integers can be graded (by the identity function) in his setting, and the compatibility of ranks with the ordering is not redundant. As a third variant, Brightwell and West[7] define a rank function to be integer-valued, but don't require its compatibility with the ordering; hence this variant can grade even e.g. the real numbers by any function, as the requirement about covers is vacuous for this example.

Note Stanley defines a poset to be graded of length n if all its maximal chains have length n (Stanley 1997, p.99). This definition is given in a context where interest is mostly in finite posets, and although the book subsequently often drops the part "of length n", it does not seem appropriate to use this as definition of "graded" for general posets, because (1) it says nothing about posets whose maximal chains are infinite, in particular (2) it excludes important posets like Young's lattice. Also it is not clear why in a graded poset all minimal elements, as well as all maximal elements, should be required to have the same length, even if Stanley gives examples making clear that he does mean to require that (ibid, pp.216 and 219).

Many authors in combinatorics define graded posets in such a way that all minimal elements of P must have rank 0, and moreover that there is a maximal rank r which is the rank of any maximal element. Then being graded means that all maximal chains have length r, as is indicated above. In this case one says that P has rank r.

Furthermore, in this case with the rank levels are associated the rank numbers or Whitney numbers

. These numbers are defined by

= number of elements of P having rank i .

The Whitney numbers are connected with a lot of important combinatorial theorems. The classic example is Sperner's theorem which can be formulated as follows:

of every finite set

the maximum cardinality of a Sperner family equals the maximum Whitney number.

Every finite powerset has the Sperner property