In statistical mechanics, a grand canonical ensemble is the statistical ensemble that is used to represent the possible states of a mechanical system of particles that is being maintained in thermodynamic equilibrium (thermal and chemical) with a reservoir.[1] The system is said to be open in the sense that the system can exchange energy and particles with a reservoir, so that various possible states of the system can differ in both their total energy and total number of particles. The system's volume, shape, and other external coordinates are kept the same in all possible states of the system.

The thermodynamic variables of the grand canonical ensemble are chemical potential (symbol: µ) and absolute temperature (symbol: T). The ensemble is also dependent on mechanical variables such as volume (symbol: V) which influence the nature of the system's internal states. This ensemble is therefore sometimes called the µVT ensemble, as each of these three quantities are constants of the ensemble.

In simple terms, the grand canonical ensemble assigns a probability P to each distinct microstate given by the following exponential:

In the case where more than one kind of particle is allowed to vary in number, the probability expression generalizes to

Grand ensembles are apt for use when describing systems such as the electrons in a conductor, or the photons in a cavity, where the shape is fixed but the energy and number of particles can easily fluctuate due to contact with a reservoir (e.g., an electrical ground or a dark surface, in these cases). The grand canonical ensemble provides a natural setting for an exact derivation of the Fermi–Dirac statistics or Bose–Einstein statistics for a system of non-interacting quantum particles (see examples below).

The condition that the system is isolated is necessary in order to ensure it has well-defined equation of motion.[1] In practice, however, it is desirable to apply the grand canonical ensemble to describe systems that are in direct contact with the reservoir, since it is that contact that ensures the equilibrium. The use of the grand canonical ensemble in these cases is usually justified either 1) by assuming that the contact is weak, or 2) by incorporating a part of the reservoir connection into the system under analysis, so that the connection's influence on the region of interest is correctly modelled.

The usefulness of the grand canonical ensemble is illustrated in the examples below. In each case the grand potential is calculated on the basis of the relationship

which is required for the microstates' probabilities to add up to 1.

In the special case of a quantum system of many non-interacting particles, the thermodynamics are simple to compute.[4] Since the particles are non-interacting, one can compute a series of single-particle stationary states, each which represent a separable part that can be included into the total quantum state of the system. For now let us refer to these single-particle stationary states as orbitals (to avoid conflating these "states" with the total many-body state), with the provision that each possible internal particle property (spin or polarization) counts as a separate orbital. Each orbital may be occupied by a particle (or particles), or may be empty.

Since the particles are non-interacting, we may make the simplification that each orbital forms a separate thermodynamic system. Thus each orbital is a grand canonical ensemble unto itself, one so simple that its statistics can be immediately derived here. Focussing on just one orbital, the total energy for a microstate of N particles in this orbital will be Nϵ, where ϵ is the characteristic energy level of that orbital. {{safesubst:#invoke:list|bulleted}} In each case the value

In classical mechanics it is also possible to consider indistinguishable particles (in fact, indistinguishability is a prerequisite for defining a chemical potential in a consistent manner; all particles of a given kind must be interchangeable[1]). We again consider placing multiple particles of the same kind into the same microstate of single-particle phase space, which we again call an "orbital". However, compared to quantum mechanics, the classical case is complicated by the fact that a microstate in classical mechanics does not refer to a single point in phase space but rather to an extended region in phase space: one microstate contains an infinite number of states, all distinct but of similar character. As a result, when multiple particles are placed into the same orbital, the overall collection of the particles (in the system phase space) does not count as one whole microstate but rather only a fraction of a microstate, because identical states (formed by permutation of identical particles) are not overcounted. The overcounting correction factor is the factorial of the number of particles.

Ionization of an isolated atom 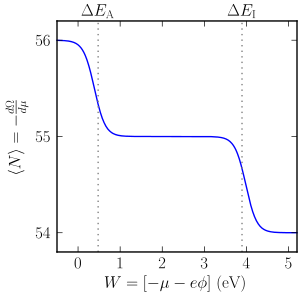 Surface ionization effect in a vaporized cesium atom at 1500 K, calculated using the method in this section (also including degeneracy). Y-axis: average number of electrons; the atom is neutral when it has 55 electrons. X-axis: energy variable, which is equal to the surface work function.

Here ΔEI and ΔEA are the atom's ionization energy and electron affinity, respectively; ϕ is the local electrostatic potential in the vacuum nearby the atom, and −q is the electron charge.

The grand potential in this case is thus determined by

The quantity −qϕ − µ is critical in this case, for determining the balance between the various states. This value is determined by the environment around the atom.

If one of these atoms is placed into a vacuum box, then −qϕ − µ = W, the work function of the box lining material. Comparing the tables of work function for various solid materials with the tables of electron affinity and ionization energy for atomic species, it is clear that many combinations would result in a neutral atom, however some specific combinations would result in the atom preferring an ionized state: e.g., a halogen atom in a ytterbium box, or a cesium atom in a tungsten box. At room temperature this situation is not stable since the atom tends to adsorb to the exposed lining of the box instead of floating freely. At high temperatures, however, the atoms are evaporated from the surface in ionic form; this spontaneous surface ionization effect has been used as a cesium ion source.[6]

At room temperature, this example finds application in semiconductors, where the ionization of an dopant atom is well described by this ensemble.[5] In the semiconductor, the conduction band edge ϵC plays the role of the vacuum energy level (replacing −qϕ), and µ is known as the Fermi level. Of course, the ionization energy and electron affinity of the dopant atom are strongly modified relative to their vacuum values. A typical donor dopant in silicon, phosphorus, has ΔEI = 45 meV;[7] the value of ϵC − µ in the intrinsic silicon is initially about 600 meV, guaranteeing the ionization of the dopant. The value of ϵC − µ depends strongly on electrostatics, however, so under some circumstances it is possible to de-ionize the dopant.

In order for a particle number to have an associated chemical potential, it must be conserved during the internal dynamics of the system, and only able to change when the system exchanges particles with an external reservoir.

If the particles can be created out of energy during the dynamics of the system, then an associated µN term must not appear in the probability expression for the grand canonical ensemble. In effect, this is the same as requiring that µ = 0 for that kind of particle. Such is the case for photons in a black cavity, whose number regularly change due to absorption and emission on the cavity walls. (On the other hand, photons in a highly reflective cavity can be conserved and caused to have a nonzero µ.[8])

In some cases the number of particles is not conserved and the N represents a more abstract conserved quantity:

On the other hand, in some cases a single kind of particle may have multiple conserved numbers:

Precise expressions for the ensemble

The precise mathematical expression for statistical ensembles has a distinct form depending on the type of mechanics under consideration (quantum or classical), as the notion of a "microstate" is considerably different. In quantum mechanics, the grand canonical ensemble affords a simple description since diagonalization provides a set of distinct microstates of a system, each with well-defined energy and particle number. The classical mechanical case is more complex as it involves not stationary states but instead an integral over canonical phase space.

Note that for the grand ensemble, the basis states of the operators Ĥ, N̂1, etc. are all states with multiple particles in Fock space, and the density matrix is defined on the same basis. Since the energy and particle numbers are all separately conserved, these operators are mutually commuting.

The grand canonical ensemble can alternatively be written in a simple form using bra–ket notation, since it is possible (given the mutually commuting nature of the energy and particle number operators) to find a complete basis of simultaneous eigenstates |ψi⟩, indexed by i, where Ĥ|ψi⟩ = Ei|ψi⟩, N̂1|ψi⟩ = N1,i|ψi⟩, and so on. Given such an eigenbasis, the grand canonical ensemble is simply

In classical mechanics, a grand ensemble is instead represented by a joint probability density function defined over multiple phase spaces of varying dimensions, ρ(N1, … Ns, p1, … pn, q1, … qn), where the p1, … pn and q1, … qn are the canonical coordinates (generalized momenta and generalized coordinates) of the system's internal degrees of freedom. The expression for the grand canonical ensemble is somewhat more delicate than the canonical ensemble since:[1]

The probability density function for the grand canonical ensemble is:

Again, the value of Ω is determined by demanding that ρ is a normalized probability density function:

This integral is taken over the entire available phase space for the given numbers of particles.

A well-known problem in the statistical mechanics of fluids (gases, liquids, plasmas) is how to treat particles that are similar or identical in nature: should they be regarded as distinguishable or not? In the system's equation of motion each particle is forever tracked as a distinguishable entity, and yet there are also valid states of the system where the positions of each particle have simply been swapped: these states are represented at different places in phase space, yet would seem to be equivalent.

If the permutations of similar particles are regarded to count as distinct states, then the factor C above is simply C = 1. From this point of view, ensembles include every permuted state as a separate microstate. Although appearing benign at first, this leads to a problem of severely non-extensive entropy in the canonical ensemble, known today as the Gibbs paradox. In the grand canonical ensemble a further logical inconsistency occurs: the number of distinguishable permutations depends not only on how many particles are in the system, but also on how many particles are in the reservoir (since the system may exchange particles with a reservoir). In this case the entropy and chemical potential are non-extensive but also badly defined, depending on a parameter (reservoir size) that should be irrelevant.

To solve these issues it is necessary that the exchange of two similar particles (within the system, or between the system and reservoir) must not be regarded as giving a distinct state of the system.[1][note 4] In order to incorporate this fact, integrals are still carried over full phase space but the result is divided by

which is the number of different permutations possible. The division by C neatly corrects the overcounting that occurs in the integral over all phase space.

is tracked by a separate particle counter