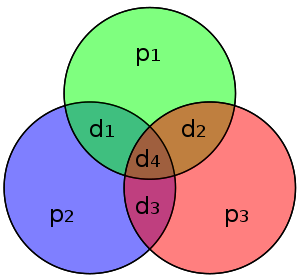 In coding theory, Hamming(7,4) is a linear error-correcting code that encodes 4 bits of data into 7 bits by adding 3 parity bits. It is a member of a larger family of Hamming codes, but the term Hamming code often refers to this specific code that Richard W. Hamming introduced in 1950. At the time, Hamming worked at Bell Telephone Laboratories and was frustrated with the error-prone punched card reader, which is why he started working on error-correcting codes.[1]

The Hamming code adds three additional check bits to every four data bits of the message. Hamming's (7,4) algorithm can correct any single-bit error, or detect all single-bit and two-bit errors. In other words, the minimal Hamming distance between any two correct codewords is 3, and received words can be correctly decoded if they are at a distance of at most one from the codeword that was transmitted by the sender. This means that for transmission medium situations where burst errors do not occur, Hamming's (7,4) code is effective (as the medium would have to be extremely noisy for 2 out of 7 bits to be flipped).

The goal of Hamming codes is to create a set of parity bits that overlap such that a single-bit error (the bit is logically flipped in value) in a data bit or a parity bit can be detected and corrected. While multiple overlaps can be created, the general method is presented in Hamming codes.

This table describes which parity bits cover which transmitted bits in the encoded word. For example, p2 provides an even parity for bits 2, 3, 6, & 7. It also details which transmitted by which parity bit by reading the column. For example, d1 is covered by p1 and p2 but not p3 This table will have a striking resemblance to the parity-check matrix (H) in the next section.

Furthermore, if the parity columns in the above table were removed

then resemblance to rows 1, 2, & 4 of the code generator matrix (G) below will also be evident.

So, by picking the parity bit coverage correctly, all errors with a Hamming distance of 1 can be detected and corrected, which is the point of using a Hamming code.

Hamming codes can be computed in linear algebra terms through matrices because Hamming codes are linear codes. For the purposes of Hamming codes, two Hamming matrices can be defined: the code generator matrix G and the parity-check matrix H: 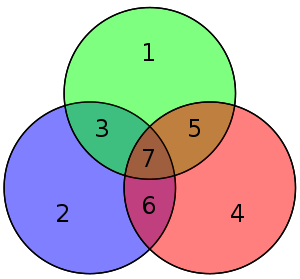 Bit position of the data and parity bits

As mentioned above, rows 1, 2, & 4 of G should look familiar as they map the data bits to their parity bits:

The remaining rows (3, 5, 6, 7) map the data to their position in encoded form and there is only 1 in that row so it is an identical copy. In fact, these four rows are linearly independent and form the identity matrix (by design, not coincidence).

The 4 data bits — assembled as a vector p — is pre-multiplied by G (i.e., Gp) and taken modulo 2 to yield the encoded value that is transmitted. The original 4 data bits are converted to 7 bits (hence the name "Hamming(7,4)") with 3 parity bits added to ensure even parity using the above data bit coverages. The first table above shows the mapping between each data and parity bit into its final bit position (1 through 7) but this can also be presented in a Venn diagram. The first diagram in this article shows three circles (one for each parity bit) and encloses data bits that each parity bit covers. The second diagram (shown to the right) is identical but, instead, the bit positions are marked.

For the remainder of this section, the following 4 bits (shown as a column vector) will be used as a running example:

Mapping in the example x. The parity of the red, green, and blue circles are even.

Suppose we want to transmit this data (1011) over a noisy communications channel. Specifically, a binary symmetric channel meaning that error corruption does not favor either zero or one (it is symmetric in causing errors). Furthermore, all source vectors are assumed to be equiprobable. We take the product of G and p, with entries modulo 2, to determine the transmitted codeword x:

This means that 0110011 would be transmitted instead of transmitting 1011.

Programmers concerned about multiplication should observe that each row of the result is the least significant bit of the Population Count of set bits resulting from the row and column being Bitwise ANDed together rather than multiplied.

In the diagram to the right, the 7 bits of the encoded word are inserted into their respective locations; from inspection it is clear that the parity of the red, green, and blue circles are even:

What will be shown shortly is that if, during transmission, a bit is flipped then the parity of 2 or all 3 circles will be incorrect and the errored bit can be determined (even if one of the parity bits) by knowing that the parity of all three of these circles should be even.

If no error occurs during transmission, then the received codeword r is identical to the transmitted codeword x:

The receiver multiplies H and r to obtain the syndrome vector z, which indicates whether an error has occurred, and if so, for which codeword bit. Performing this multiplication (again, entries modulo 2):

Since the syndrome z is the null vector, the receiver can conclude that no error has occurred. This conclusion is based on the observation that when the data vector is multiplied by G, a change of basis occurs into a vector subspace that is the kernel of H. As long as nothing happens during transmission, r will remain in the kernel of H and the multiplication will yield the null vector.

Otherwise, suppose a single bit error has occurred. Mathematically, we can write

modulo 2, where ei is the

unit vector, that is, a zero vector with a 1 in the

Thus the above expression signifies a single bit error in the

Now, if we multiply this vector by H:

Since x is the transmitted data, it is without error, and as a result, the product of H and x is zero. Thus

Now, the product of H with the

standard basis vector picks out that column of H, we know the error occurs in the place where this column of H occurs.

For example, suppose we have introduced a bit error on bit #5

The diagram to the right shows the bit error (shown in blue text) and the bad parity created (shown in red text) in the red and green circles. The bit error can be detected by computing the parity of the red, green, and blue circles. If a bad parity is detected then the data bit that overlaps only the bad parity circles is the bit with the error. In the above example, the red & green circles have bad parity so the bit corresponding to the intersection of red & green but not blue indicates the errored bit.

This corrected received value indeed, now, matches the transmitted value x from above.

Once the received vector has been determined to be error-free or corrected if an error occurred (assuming only zero or one bit errors are possible) then the received data needs to be decoded back into the original 4 bits.

Then the received value, pr, is equal to Rr. Using the running example from above

It is not difficult to show that only single bit errors can be corrected using this scheme. Alternatively, Hamming codes can be used to detect single and double bit errors, by merely noting that the product of H is nonzero whenever errors have occurred. In the diagram to the right, bits 4 & 5 were flipped. This yields only one circle (green) with an invalid parity but the errors are not recoverable.

The result of calculations with 1e8 and 1e9 trials are the following: