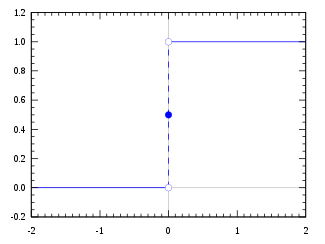 The Heaviside step function, or the unit step function, usually denoted by H (but sometimes u or θ), is a discontinuous function whose value is zero for negative argument and one for positive argument. It seldom matters what value is used for H(0), since H is mostly used as a distribution. Some common choices can be seen below.

The function is used in the mathematics of control theory and signal processing to represent a signal that switches on at a specified time and stays switched on indefinitely. It is also used in structural mechanics together with the Dirac delta function to describe different types of structural loads. It was named after the English polymath Oliver Heaviside.

The Heaviside function is the integral of the Dirac delta function: H′ = δ. This is sometimes written as

although this expansion may not hold (or even make sense) for x = 0, depending on which formalism one uses to give meaning to integrals involving δ.

An alternative form of the unit step, as a function of a discrete variable n:

where n is an integer. Unlike the usual (not discrete) case, the definition of H[0] is significant.

This function is the cumulative summation of the Kronecker delta:

is the discrete unit impulse function.

For a smooth approximation to the step function, one can use the logistic function

where a larger k corresponds to a sharper transition at x = 0. If we take H(0) = ½, equality holds in the limit:

There are many other smooth, analytic approximations to the step function.[1] Among the possibilities are:

Often an integral representation of the Heaviside step function is useful:

Since H is usually used in integration, and the value of a function at a single point does not affect its integral, it rarely matters what particular value is chosen of H(0). Indeed when H is considered as a distribution or an element of

(see Lp space) it does not even make sense to talk of a value at zero, since such objects are only defined almost everywhere. If using some analytic approximation (as in the examples above) then often whatever happens to be the relevant limit at zero is used.

There exist various reasons for choosing a particular value.

The ramp function is the antiderivative of the Heaviside step function:

The distributional derivative of the Heaviside step function is the Dirac delta function:

is the distribution that takes a test function

to the Cauchy principal value of

The limit appearing in the integral is also taken in the sense of (tempered) distributions.

This can be represented as a hyperfunction as