A heuristic function, or simply a heuristic, is a function that ranks alternatives in search algorithms at each branching step based on available information to decide which branch to follow.

For example, for shortest path problems, a heuristic is a function,

defined on the nodes of a search tree, which serves as an estimate of the cost of the cheapest path from that node to the goal node. Heuristics are used by informed search algorithms such as Greedy best-first search and A* to choose the best node to explore. Greedy best-first search will choose the node that has the lowest value for the heuristic function. A* search will expand nodes that have the lowest value for

is the (exact) cost of the path from the initial state to the current node. If

never overestimates the costs of reaching the goal, then A* will always find an optimal solution.

The classical problem involving heuristics is the n-puzzle. Commonly used heuristics for this problem include counting the number of misplaced tiles and finding the sum of the Manhattan distances between each block and its position in the goal configuration. Note that both are admissible.

Effect of heuristics on computational performance

In any searching problem where there are

choices at each node and a depth of

at the goal node, a naive searching algorithm would have to potentially search around

nodes before finding a solution. Heuristics improve the efficiency of search algorithms by reducing the branching factor from

to a lower constant

, using a cutoff mechanism. The branching factor can be used for defining a partial order on the heuristics, such that

has a lower branch factor than

for a given node

of the search tree. Heuristics giving lower branching factors at every node in the search tree are preferred for the resolution of a particular problem, as they are more computationally efficient.

The problem of finding an admissible heuristic with a low branching factor for common search tasks has been extensively researched in the artificial intelligence community. Several common techniques are used:

Using these techniques a program called ABSOLVER was written (1993) by A.E. Prieditis for automatically generating heuristics for a given problem[1]". ABSOLVER generated a new heuristic for the 8-puzzle better than any pre-existing heuristic and found the first useful heuristic for solving the Rubik's Cube.[1]

is consistent when the value of

for each node along a path to goal node are non decreasing. 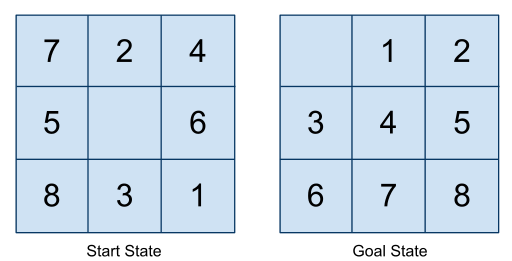 One might be interested in finding a heuristic to estimate the number of steps required to solve an 8-puzzle from a given state. Two simple heuristic functions are:

= the number of misplaced tiles. This is also known as the Hamming Distance. In the pictured example, the start state has

is an admissible heuristic because any tile that is out of place will have to be moved at least once.

= the sum of the distances of the tiles from their goal positions. Because tiles cannot be moved diagonally, the distance counted is the sum of horizontal and vertical distances. This is also known as the Manhattan Distance. In the pictured example, the start state has

is also an admissible heuristic because any move can, at best, move one tile one step closer to the goal.

As expected, neither heuristic overestimates the true number of moves required to solve the puzzle, which is 26 (

). Additionally, it is easy to see from the definitions of the heuristic functions that for any given state,

will always be greater than or equal to

(example taken from Russell and Norvig)