In statistics, Hodges’ estimator[1] (or the Hodges–Le Cam estimator[2]), named for Joseph Hodges, is a famous[3] counter example of an estimator which is "superefficient", i.e. it attains smaller asymptotic variance than regular efficient estimators. The existence of such a counterexample is the reason for the introduction of the notion of regular estimators.

is a "common" estimator for some parameter θ: it is consistent, and converges to some asymptotic distribution Lθ (usually this is a normal distribution with mean zero and variance which may depend on θ) at the Template:Sqrt-rate:

Then the Hodges’ estimator

This estimator is equal to

everywhere except on the small interval [−n−1/4, n−1/4], where it is equal to zero. It is not difficult to see that this estimator is consistent for θ, and its asymptotic distribution is [6]

for any α ∈ R. Thus this estimator has the same asymptotic distribution as

for all θ ≠ 0, whereas for θ = 0 the rate of convergence becomes arbitrarily fast. This estimator is superefficient, as it surpasses the asymptotic behavior of the efficient estimator

at least at one point θ = 0. In general, superefficiency may only be attained on a subset of measure zero of the parameter space Θ. 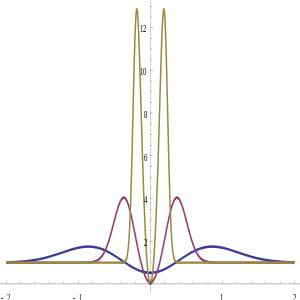 Suppose x1, …, xn is an iid sample from normal distribution N(θ, 1) with unknown mean but known variance. Then the common estimator for the population mean θ is the arithmetic mean of all observations:

. The corresponding Hodges’ estimator will be

, where 1{…} denotes the indicator function.

behaves erratically in the vicinity of zero, and even becomes unbounded as n → ∞. This demonstrates that the Hodges’ estimator is not regular, and its asymptotic properties are not adequately described by limits of the form (θ fixed, n → ∞).