A diagram used in the snake lemma, a basic result in homological algebra.

Homological algebra is the branch of mathematics that studies homology in a general algebraic setting. It is a relatively young discipline, whose origins can be traced to investigations in combinatorial topology (a precursor to algebraic topology) and abstract algebra (theory of modules and syzygies) at the end of the 19th century, chiefly by Henri Poincaré and David Hilbert.

The development of homological algebra was closely intertwined with the emergence of category theory. By and large, homological algebra is the study of homological functors and the intricate algebraic structures that they entail. One quite useful and ubiquitous concept in mathematics is that of chain complexes, which can be studied both through their homology and cohomology. Homological algebra affords the means to extract information contained in these complexes and present it in the form of homological invariants of rings, modules, topological spaces, and other 'tangible' mathematical objects. A powerful tool for doing this is provided by spectral sequences.

From its very origins, homological algebra has played an enormous role in algebraic topology. Its sphere of influence has gradually expanded and presently includes commutative algebra, algebraic geometry, algebraic number theory, representation theory, mathematical physics, operator algebras, complex analysis, and the theory of partial differential equations. K-theory is an independent discipline which draws upon methods of homological algebra, as does the noncommutative geometry of Alain Connes.

Homological algebra began to be studied in its most basic form in the 1800s as a branch of topology, but it wasn't until the 1940s that it became an independent subject with the study of objects such as the ext functor and the tor functor, among others.[1]

{{#invoke:main|main}} The chain complex is the central notion of homological algebra. It is a sequence

of abelian groups and group homomorphisms, with the property that the composition of any two consecutive maps is zero:

The elements of Cn are called n-chains and the homomorphisms dn are called the boundary maps or differentials. The chain groups Cn may be endowed with extra structure; for example, they may be vector spaces or modules over a fixed ring R. The differentials must preserve the extra structure if it exists; for example, they must be linear maps or homomorphisms of R-modules. For notational convenience, restrict attention to abelian groups (more correctly, to the category Ab of abelian groups); a celebrated theorem by Barry Mitchell implies the results will generalize to any abelian category. Every chain complex defines two further sequences of abelian groups, the cycles Zn = Ker dn and the boundaries Bn = Im dn+1, where Ker d and Im d denote the kernel and the image of d. Since the composition of two consecutive boundary maps is zero, these groups are embedded into each other as

Subgroups of abelian groups are automatically normal; therefore we can define the nth homology group Hn(C) as the factor group of the n-cycles by the n-boundaries,

A chain complex is called acyclic or an exact sequence if all its homology groups are zero.

Chain complexes arise in abundance in algebra and algebraic topology. For example, if X is a topological space then the singular chains Cn(X) are formal linear combinations of continuous maps from the standard n-simplex into X; if K is a simplicial complex then the simplicial chains Cn(K) are formal linear combinations of the n-simplices of X; if A = F/R is a presentation of an abelian group A by generators and relations, where F is a free abelian group spanned by the generators and R is the subgroup of relations, then letting C1(A) = R, C0(A) = F, and Cn(A) = 0 for all other n defines a sequence of abelian groups. In all these cases, there are natural differentials dn making Cn into a chain complex, whose homology reflects the structure of the topological space X, the simplicial complex K, or the abelian group A. In the case of topological spaces, we arrive at the notion of singular homology, which plays a fundamental role in investigating the properties of such spaces, for example, manifolds.

On a philosophical level, homological algebra teaches us that certain chain complexes associated with algebraic or geometric objects (topological spaces, simplicial complexes, R-modules) contain a lot of valuable algebraic information about them, with the homology being only the most readily available part. On a technical level, homological algebra provides the tools for manipulating complexes and extracting this information. Here are two general illustrations.

{{#invoke:main|main}} In the context of group theory, a sequence

of groups and group homomorphisms is called exact if the image (or range) of each homomorphism is equal to the kernel of the next:

Note that the sequence of groups and homomorphisms may be either finite or infinite.

A similar definition can be made for certain other algebraic structures. For example, one could have an exact sequence of vector spaces and linear maps, or of modules and module homomorphisms. More generally, the notion of an exact sequence makes sense in any category with kernels and cokernels.

where ƒ is a monomorphism and g is an epimorphism. In this case, A is a subobject of B, and the corresponding quotient is isomorphic to C:

where 0 represents the zero object, such as the trivial group or a zero-dimensional vector space. The placement of the 0's forces ƒ to be a monomorphism and g to be an epimorphism (see below).

The five lemma states that, if the rows are exact, m and p are isomorphisms, l is an epimorphism, and q is a monomorphism, then n is also an isomorphism.

where the rows are exact sequences and 0 is the zero object. Then there is an exact sequence relating the kernels and cokernels of a, b, and c:

More concretely, a category is abelian if

{{#invoke:main|main}} Let R be a ring and let ModR be the category of modules over R. Let B be in ModR and set T(B) = HomR(A,B), for fixed A in ModR. This is a left exact functor and thus has right derived functors RnT. The Ext functor is defined by

This can be calculated by taking any injective resolution

Then (RnT)(B) is the homology of this complex. Note that HomR(A,B) is excluded from the complex.

An alternative definition is given using the functor G(A)=HomR(A,B). For a fixed module B, this is a contravariant left exact functor, and thus we also have right derived functors RnG, and can define

This can be calculated by choosing any projective resolution

and proceeding dually by computing

Then (RnG)(A) is the homology of this complex. Again note that HomR(A,B) is excluded.

These two constructions turn out to yield isomorphic results, and so both may be used to calculate the Ext functor.

i.e., we take a projective resolution

(note that A⊗RB does not appear and the last arrow is just the zero map) and take the homology of this complex.

{{#invoke:main|main}} Fix an abelian category, such as a category of modules over a ring. A spectral sequence is a choice of a nonnegative integer r0 and a collection of three sequences: 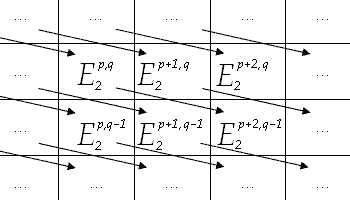 The E2 sheet of a cohomological spectral sequence

A doubly graded spectral sequence has a tremendous amount of data to keep track of, but there is a common visualization technique which makes the structure of the spectral sequence clearer. We have three indices, r, p, and q. For each r, imagine that we have a sheet of graph paper. On this sheet, we will take p to be the horizontal direction and q to be the vertical direction. At each lattice point we have the object

A continuous map of topological spaces gives rise to a homomorphism between their nth homology groups for all n. This basic fact of algebraic topology finds a natural explanation through certain properties of chain complexes. Since it is very common to study several topological spaces simultaneously, in homological algebra one is led to simultaneous consideration of multiple chain complexes.

A morphism between two chain complexes,

, is a family of homomorphisms of abelian groups Fn:Cn → Dn that commute with the differentials, in the sense that Fn -1 •  dnC = dnD • Fn for all n. A morphism of chain complexes induces a morphism

of their homology groups, consisting of the homomorphisms Hn(F): Hn(C) → Hn(D) for all n. A morphism F is called a quasi-isomorphism if it induces an isomorphism on the nth homology for all n.

that coincides with the composition C(g) • C(f). It follows that the homology groups

are functorial as well, so that morphisms between algebraic or topological objects give rise to compatible maps between their homology.

The following definition arises from a typical situation in algebra and topology. A triple consisting of three chain complexes

and two morphisms between them,

is called an exact triple, or a short exact sequence of complexes, and written as

if for any n, the sequence

is a short exact sequence of abelian groups. By definition, this means that fn is an injection, gn is a surjection, and Im fn =  Ker gn. One of the most basic theorems of homological algebra, sometimes known as the zig-zag lemma, states that, in this case, there is a long exact sequence in homology

where the homology groups of L, M, and N cyclically follow each other, and δn are certain homomorphisms determined by f and g, called the connecting homomorphisms. Topological manifestations of this theorem include the Mayer–Vietoris sequence and the long exact sequence for relative homology.

Cohomology theories have been defined for many different objects such as topological spaces, sheaves, groups, rings, Lie algebras, and C*-algebras. The study of modern algebraic geometry would be almost unthinkable without sheaf cohomology.

With a diverse set of applications in mind, it was natural to try to put the whole subject on a uniform basis. There were several attempts before the subject settled down. An approximate history can be stated as follows:

These move from computability to generality.

The computational sledgehammer par excellence is the spectral sequence; these are essential in the Cartan-Eilenberg and Tohoku approaches where they are needed, for instance, to compute the derived functors of a composition of two functors. Spectral sequences are less essential in the derived category approach, but still play a role whenever concrete computations are necessary.

There have been attempts at 'non-commutative' theories which extend first cohomology as torsors (important in Galois cohomology).