In mathematics (especially algebraic topology and abstract algebra), homology (in part from Greek ὁμός homos "identical") is a certain general procedure to associate a sequence of abelian groups or modules with a given mathematical object such as a topological space or a group. See singular homology for a concrete version for topological spaces, or group cohomology for a concrete version for groups.

For a topological space, the homology groups are generally much easier to compute than the homotopy groups, and consequently one usually will have an easier time working with homology to aid in the classification of spaces.

The original motivation for defining homology groups is the observation that shapes are distinguished by their holes. But because a hole is "not there", it is not immediately obvious how to define a hole, or how to distinguish between different kinds of holes. Homology is a rigorous mathematical method for defining and categorizing holes in a shape. As it turns out, subtle kinds of holes exist that homology cannot "see" — in which case homotopy groups may be what is needed.

Informally, the homology of a topological space X is a set of topological invariants of X represented by its homology groups

describes the path-connected components of X.[1]

The circle or 1-sphere

is the group of integers and

is the trivial group. The group

represents a finitely-generated abelian group, with a single generator representing the one-dimensional hole contained in a circle.[2]

In general for an n-dimensional sphere Sn, the homology groups are 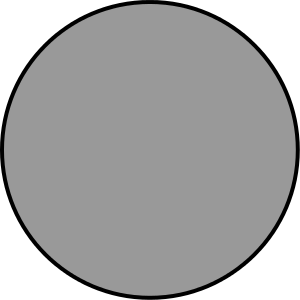 The solid disc or 1-ball

A one-dimensional ball B1 is a solid disc. It has a single path-connected component, but in contrast to the circle, has no one-dimensional or higher-dimensional holes. The corresponding homology groups are all trivial except for

The torus is defined as a Cartesian product of two circles

. The torus has a single path-connected component, two independent one-dimensional holes (indicated by circles in red and blue) and one two-dimensional hole as the interior of the torus. The corresponding homology groups are[3]

Homology theory can be said to start with the Euler polyhedron formula, or Euler characteristic.[4] This was followed by Riemann's definition of genus and n-fold connectedness numerical invariants in 1857 and Betti's proof in 1871 of the independence of "homology numbers" from the choice of basis.[5]

A recognisable theory of homology, including homology classes and relations, was first introduced by Henri Poincaré in his seminal paper "Analysis situs", J. Ecole polytech. (2) 1. 1–121 (1895). Poincaré was also the first to consider the simplicial homology of a triangulated manifold and to create what is now called a chain complex. Homology remains the primary method of classifying manifolds.[6][7]

The homology group was further developed by Emmy Noether[8][9] and, independently, by Leopold Vietoris and Walther Mayer, in the period 1925–28.[10] Prior to this, topological classes in combinatorial topology were not formally considered as abelian groups. The spread of homology groups marked the change of terminology and viewpoint from "combinatorial topology" to "algebraic topology".[11]

The construction begins with an object such as a topological space X, on which one first defines a chain complex C(X) encoding information about X. A chain complex is a sequence of abelian groups or modules C0, C1, C2, ... connected by homomorphisms

which are called boundary operators.[3] That is,

where 0 denotes the trivial group and

for i < 0. It is also required that the composition of any two consecutive boundary operators be trivial. That is, for all n,

i.e., the constant map sending every element of Cn+1 to the group identity in Cn - 1. That the boundary of a boundary is trivial implies

denotes the image of the boundary operator and

its kernel. Elements of

are called boundaries and elements of

Since each chain group Cn is abelian all its subgroups are normal. Then because

are both subgroups of Cn,

is a normal subgroup of

. Then one can create the quotient group

A chain complex is said to be exact if the image of the (n + 1)-th map is always equal to the kernel of the n-th map. The homology groups of X therefore measure "how far" the chain complex associated to X is from being exact.[13]

where the boundary operator

for a combination Σ niσi of points σi, which are the fixed generators of C0. The reduced homology groups

in the chain complex represents the unique map

from the empty simplex to X.

groups is usually rather difficult since they have a very large number of generators. On the other hand, there are tools which make the task easier.

Cohomology groups are formally similar to homology groups: one starts with a cochain complex, which is the same as a chain complex but whose arrows, now denoted dn point in the direction of increasing n rather than decreasing n; then the groups

follow from the same description. The n-th cohomology group of X is then the quotient group

in analogy with the n-th homology group.

The motivating example comes from algebraic topology: the simplicial homology of a simplicial complex X. Here An is the free abelian group or module whose generators are the n-dimensional oriented simplexes of X. The mappings are called the boundary mappings and send the simplex with vertices

If we take the modules to be over a field, then the dimension of the n-th homology of X turns out to be the number of "holes" in X at dimension n. It may be computed by putting matrix representations of these boundary mappings in Smith normal form.

Using simplicial homology example as a model, one can define a singular homology for any topological space X. A chain complex for X is defined by taking An to be the free abelian group (or free module) whose generators are all continuous maps from n-dimensional simplices into X. The homomorphisms ∂n arise from the boundary maps of simplices.

If (dn: An → An-1) is a chain complex such that all but finitely many An are zero, and the others are finitely generated abelian groups (or finite-dimensional vector spaces), then we can define the Euler characteristic

(using the rank in the case of abelian groups and the Hamel dimension in the case of vector spaces). It turns out that the Euler characteristic can also be computed on the level of homology:

and, especially in algebraic topology, this provides two ways to compute the important invariant χ for the object X which gave rise to the chain complex.

All maps in this long exact sequence are induced by the maps between the chain complexes, except for the maps Hn(C) → Hn-1(A) The latter are called connecting homomorphisms and are provided by the snake lemma. The snake lemma can be applied to homology in numerous ways that aid in calculating homology groups, such as the theories of relative homology and Mayer-Vietoris sequences.

Application in science and engineering

In topological data analysis, data sets are regarded as a point cloud sampling of a manifold or algebraic variety embedded in Euclidean space. By linking nearest neighbor points in the cloud into a triangulation, a simplicial approximation of the manifold is created and its simplicial homology may be calculated. Finding techniques to robustly calculate homology using various triangulation strategies over multiple length scales is the topic of persistent homology.[16]

In sensor networks, sensors may communicate information via an ad-hoc network that dynamically changes in time. To understand the global context of this set of local measurements and communication paths, it is useful to compute the homology of the network topology to evaluate, for instance, holes in coverage.[17]

In dynamical systems theory in physics, Poincare was one of the first to consider the interplay between the invariant manifold of a dynamical system and its topological invariants. Morse theory relates the dynamics of a gradient flow on a manifold to, for example, its homology. Floer homology extended this to infinite-dimensional manifolds. The KAM theorem established that periodic orbits can follow complex trajectories; in particular, they may form braids that can be investigated using Floer homology.[18]

In one class of finite element methods, boundary-value problems for differential equations involving the Hodge-Laplace operator may need to be solved on topologically nontrivial domains, for example, in electromagnetic simulations. In these simulations, solution is aided by fixing the cohomology class of the solution based on the chosen boundary conditions and the homology of the domain. FEM domains can be triangulated, from which the simplicial homology can be calculated.[19][20]

Various software packages have been developed for the purposes of computing homology groups of finite cell complexes. Linbox is a C++ library for performing fast matrix operations, including Smith normal form; it interfaces with both Gap and Maple. Chomp, CAPD::Redhom and Perseus are also written in C++. All three implement pre-processing algorithms based on Simple-homotopy equivalence and discrete Morse theory to perform homology-preserving reductions of the input cell complexes before resorting to matrix algebra. Kenzo is written in Lisp, and in addition to homology it may also be used to generate presentations of homotopy groups of finite simplicial complexes. Gmsh includes a homology solver for finite element meshes, which can generate Cohomology bases directly usable by finite element software.[19]