In geometry, hyperbolic motions are isometric automorphisms of a hyperbolic space. Under composition of mappings, the hyperbolic motions form a continuous group. This group is said to characterize the hyperbolic space. Such an approach to geometry was cultivated by Felix Klein in his Erlangen program. The idea of reducing geometry to its characteristic group was developed particularly by Mario Pieri in his reduction of the primitive notions of geometry to merely point and motion.

This article exhibits these examples of the use of hyperbolic motions: the extension of the metric

to the half-plane, and in the location of a quasi-sphere of a hypercomplex number system.

Introduction of metric in upper half-plane 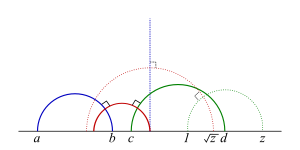 For some hyperbolic motions in the half-plane see the Ultraparallel theorem.

Note: the shift and dilation are mappings from inversive geometry composed of a pair of reflections in vertical lines or concentric circles respectively.

Use of semi-circle Z

so that q lies on the semicircle Z of radius ½ and center (½, 0). Thus the tangent ray at (1, 0) gets mapped to Z by the third fundamental hyperbolic motion. Any semicircle can be re-sized by a dilation to radius ½ and shifted to Z, then the inversion carries it to the tangent ray. So the collection of hyperbolic motions permutes the semicircles with diameters on y = 0 sometimes with vertical rays, and vice versa. Suppose one agrees to measure length on vertical rays by using the logarithm function:

Then by means of hyperbolic motions one can measure distances between points on semicircles too: first move the points to Z with appropriate shift and dilation, then place them by inversion on the tangent ray where the logarithmic distance is known.

For m and n in HP, let b be the perpendicular bisector of the line segment connecting m and n. If b is parallel to the abscissa, then m and n are connected by a vertical ray, otherwise b intersects the abscissa so there is a semicircle centered at this intersection that passes through m and n. The set HP becomes a metric space when equipped with the distance d(m,n) for m,n ∈ HP as found on the vertical ray or semicircle. One calls the vertical rays and semicircles the hyperbolic lines in HP. The geometry of points and hyperbolic lines in HP is an example of a non-Euclidean geometry; nevertheless, the construction of the line and distance concepts for HP relies heavily on the original geometry of Euclid.

Consider the disk D = {z ∈ C : z z* < 1 } in the complex plane C. The geometric plane of Lobachevsky can be displayed in D with circular arcs perpendicular to the boundary of D signifying hyperbolic lines. Using the arithmetic and geometry of complex numbers, and Möbius transformations, there is the Poincaré disc model of the hyperbolic plane:

Since it also permutes the hyperbolic lines, we see that these transformations are motions of the D model of hyperbolic geometry. A complex matrix

with aa* − bb* = 1, which represents the Möbius transformation from the projective viewpoint, can be considered to be on the unit quasi-sphere in the ring of coquaternions.