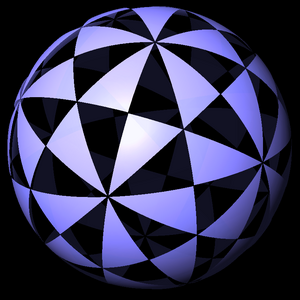 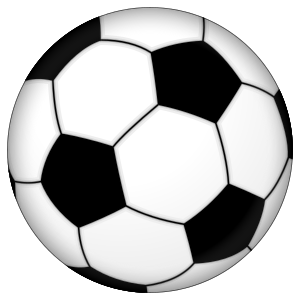 A Soccer ball, a common example of a spherical truncated icosahedron, has full icosahedral symmetry.

A regular icosahedron has 60 rotational (or orientation-preserving) symmetries, and a symmetry order of 120 including transformations that combine a reflection and a rotation. A regular dodecahedron has the same set of symmetries, since it is the dual of the icosahedron.

The set of orientation-preserving symmetries forms a group referred to as A5 (the alternating group on 5 letters), and the full symmetry group (including reflections) is the product A5 × Z2. The latter group is also known as the Coxeter group H3, and is also represented by Coxeter notation, [5,3] and Coxeter diagram Template:CDD.

Icosahedral symmetry is not compatible with translational symmetry, so there are no associated crystallographic point groups or space groups.

Presentations corresponding to the above are:

These correspond to the icosahedral groups (rotational and full) being the (2,3,5) triangle groups.

The first presentation was given by William Rowan Hamilton in 1856, in his paper on icosian calculus.[1]

Note that other presentations are possible, for instance as an alternating group (for I).

The Template:Visible anchor I is of order 60. The group I is isomorphic to A5, the alternating group of even permutations of five objects. This isomorphism can be realized by I acting on various compounds, notably the compound of five cubes (which inscribe in the dodecahedron), the compound of five octahedra, or either of the two compounds of five tetrahedra (which are enantiomorphs, and inscribe in the dodecahedron).

The Template:Visible anchor Ih has order 120. It has I as normal subgroup of index 2. The group Ih is isomorphic to I × Z2, or A5 × Z2, with the inversion in the center corresponding to element (identity,-1), where Z2 is written multiplicatively.

The following groups all have order 120, but are not isomorphic:

has an exceptional irreducible 3-dimensional representation (as the icosahedral rotation group), but

does not have an irreducible 3-dimensional representation, corresponding to the full icosahedral group not being the symmetric group.

These can also be related to linear groups over the finite field with five elements, which exhibit the subgroups and covering groups directly; none of these are the full icosahedral group: 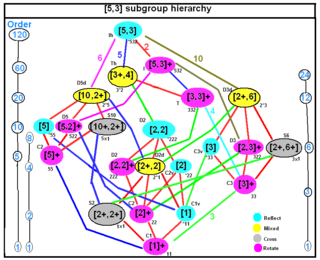 All of these classes of subgroups are conjugate (i.e., all vertex stabilizers are conjugate), and admit geometric interpretations.

Note that the stabilizer of a vertex/edge/face/polyhedron and its opposite are equal, since

For each of these, there are 5 conjugate copies, and the conjugation action gives a map, indeed an isomorphism,

Fundamental domains for the icosahedral rotation group and the full icosahedral group are given by:

In the disdyakis triacontahedron one full face is a fundamental domain; other solids with the same symmetry can be obtained by adjusting the orientation of the faces, e.g. flattening selected subsets of faces to combine each subset into one face, or replacing each face by multiple faces, or a curved surface.

Other objects with icosahedral symmetry 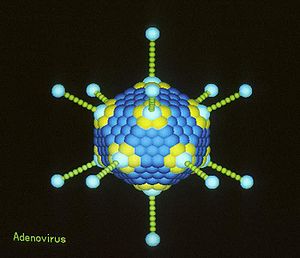 Icosahedral capsid of an Adenovirus

For the intermediate material phase called liquid crystals the existence of icosahedral symmetry was proposed by H. Kleinert and K. Maki[2] and its structure was first analyzed in detail in that paper. See the review article here. In aluminum, the icosahedral structure was discovered experimentally three years after this by Dan Shechtman, which earned him the Nobel Prize in 2011.

This geometry, and associated symmetry group, was studied by Felix Klein as the monodromy groups of a Belyi surface – a Riemann surface with a holomorphic map to the Riemann sphere, ramified only at 0, 1, and infinity (a Belyi function) – the cusps are the points lying over infinity, while the vertices and the centers of each edge lie over 0 and 1; the degree of the covering (number of sheets) equals 5.

This arose from his efforts to give a geometric setting for why icosahedral symmetry arose in the solution of the quintic equation, with the theory given in the famous Template:Harv; a modern exposition is given in Template:Harv.

Klein's investigations continued with his discovery of order 7 and order 11 symmetries in Template:Harv and Template:Harv (and associated coverings of degree 7 and 11) and dessins d'enfants, the first yielding the Klein quartic, whose associated geometry has a tiling by 24 heptagons (with a cusp at the center of each).

Similar geometries occur for PSL(2,n) and more general groups for other modular curves.

More exotically, there are special connections between the groups PSL(2,5) (order 60), PSL(2,7) (order 168) and PSL(2,11) (order 660), which also admit geometric interpretations – PSL(2,5) is the symmetries of the icosahedron (genus 0), PSL(2,7) of the Klein quartic (genus 3), and PSL(2,11) the buckyball surface (genus 70). These groups form a "trinity" in the sense of Vladimir Arnold, which gives a framework for the various relationships; see trinities for details.

There is a close relationship to other Platonic solids.