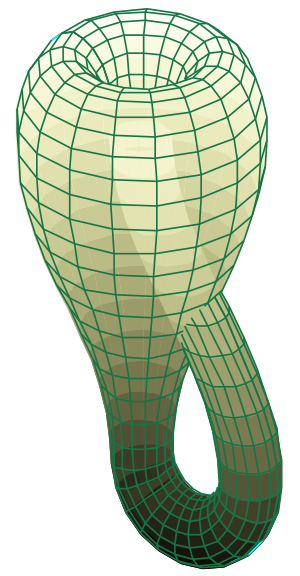 The Klein bottle, immersed in 3-space.

is an injective function at every point p of M (where the notation TpX represents the tangent space of X at the point p). Equivalently, f is an immersion if its derivative has constant rank equal to the dimension of M:

The function f itself need not be injective, only its derivative. 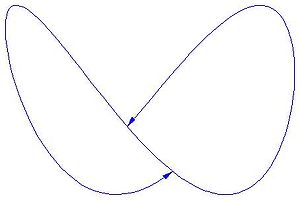 An injectively immersed submanifold that is not an embedding.

Stephen Smale expressed the regular homotopy classes of immersions f : Mm → Rn as the homotopy groups of a certain Stiefel manifold. The sphere eversion was a particularly striking consequence.

The Hirsch-Smale classification of immersions was generalized by Mikhail Gromov.

The Möbius strip does not immerse in codimension 0 because its tangent bundle is non-trivial.

The primary obstruction to the existence of an immersion i : Mm → Rn is the stable normal bundle of M, as detected by its characteristic classes, notably its Stiefel–Whitney classes. That is, since Rn is parallelizable, the pullback of its tangent bundle to M is trivial; since this pullback is the direct sum of the (intrinsically defined) tangent bundle on M, TM, which has dimension m, and of the normal bundle ν of the immersion i, which has dimension n−m, for there to be a codimension k immersion of M, there must be a vector bundle of dimension k, ξk, standing in for the normal bundle ν, such that TM ⊕ ξk is trivial. Conversely, given such a bundle, an immersion of M with this normal bundle is equivalent to a codimension 0 immersion of the total space of this bundle, which is an open manifold.

For example, the Möbius strip has non-trivial tangent bundle, so it cannot immerse in codimension 0 (in R2), though it embeds in codimension 1 (in R3).

In 1960, William S. Massey Template:Harv showed that these characteristic classes (the Stiefel–Whitney classes of the stable normal bundle) vanish above degree n−α(n), where α(n) is the number of “1” digits when n is written in binary; this bound is sharp, as realized by real projective space. This gave evidence to the Immersion Conjecture, namely that every n-manifold could be immersed in codimension n−α(n), i.e., in R2n−α(n). This conjecture was proven in 1985 by Ralph Cohen Template:Harv.

Further, codimenson 0 immersions do not behave like other immersions, which are largely determined by the stable normal bundle: in codimension 0 one has issues of fundamental class and cover spaces. For instance, there is no codimension 0 immersion S1 → R1, despite the circle being parallelizable, which can be proven because the line has no fundamental class, so one does not get the required map on top cohomology. Alternatively, this is by invariance of domain. Similarly, although S3 and the 3-torus T3 are both parallelizable, there is no immersion T3 → S3 – any such cover would have to be ramified at some points, since the sphere is simply connected.

The nature of the multiple points classifies immersions; for example, immersions of a circle in the plane are classified up to regular homotopy by the number of double points.

At a key point in surgery theory it is necessary to decide if an immersion f : Sm → N2m of an m-sphere in a 2m-dimensional manifold is regular homotopic to an embedding, in which case it can be killed by surgery. Wall associated to f an invariant μ(f) in a quotient of the fundamental group ring Z[π1(N)] which counts the double points of f in the universal cover of N. For m > 2, f is regular homotopic to an embedding if and only if μ(f) = 0 by the Whitney trick.

One can study embeddings as "immersions without multiple points", since immersions are easier to classify. Thus, one can start from immersions and try to eliminate multiple points, seeing if one can do this without introducing other singularities – studying "multiple disjunctions". This was first done by André Haefliger, and this approach is fruitful in codimension 3 or more – from the point of view of surgery theory, this is "high (co)dimension", unlike codimension 2 which is the knotting dimension, as in knot theory. It is studied categorically via the "calculus of functors" by Thomas Goodwillie, John Klein, and Michael S. Weiss.

The quadrifolium, the 4-petaled rose. 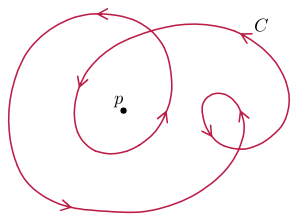 This curve has total curvature 6π, and turning number 3, though it only has winding number 2 about p.

{{#invoke:main|main}} Immersed plane curves have a well-defined turning number, which can be defined as the total curvature divided by 2π. This is invariant under regular homotopy, by the Whitney–Graustein theorem – topologically, it is the degree of the Gauss map, or equivalently the winding number of the unit tangent (which does not vanish) about the origin. Further, this is a complete set of invariants – any two plane curves with the same turning number are regular homotopic.

Every immersed plane curve lifts to an embedded space curve via separating the intersection points, which is not true in higher dimensions. With added data (which strand is on top), immersed plane curves yield knot diagrams, which are of central interest in knot theory. While immersed plane curves, up to regular homotopy, are determined by their turning number, knots have a very rich and complex structure.

A basic result, in contrast to the case of plane curves, is that not every immersed surface lifts to a knotted surface.[2] In some cases the obstruction is 2-torsion, such as in Koschorke's example,[3] which is an immersed surface (formed from 3 Möbius bands, with a triple point) that does not lift to a knotted surface, but it has a double cover that does lift. A detailed analysis is given in Template:Harv, while a more recent survey is given in Template:Harv.

{{#invoke:main|main}} A far-reaching generalization of immersion theory is the homotopy principle: one may consider the immersion condition (the rank of the derivative is always k) as a partial differential relation (PDR), as it can be stated in terms of the partial derivatives of the function. Then Smale–Hirsch immersion theory is the result that this reduces to homotopy theory, and the homotopy principle gives general conditions and reasons for PDRs to reduce to homotopy theory.