In mathematics, an incidence matrix is a matrix that shows the relationship between two classes of objects. If the first class is X and the second is Y, the matrix has one row for each element of X and one column for each element of Y. The entry in row x and column y is 1 if x and y are related (called incident in this context) and 0 if they are not. There are variations; see below. 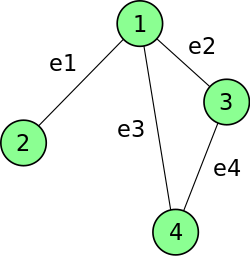 , where n and m are the numbers of vertices and edges respectively, such that

are incident and 0 otherwise.

If we look at the incidence matrix, we see that the sum of each column is equal to 2. This is because each edge has a vertex connected to each end.

where n and m are the number of vertices and edges respectively, such that

if it enters vertex

and 0 otherwise (Note that many authors use the opposite sign convention.).

The oriented or unoriented incidence matrix of a graph G is related to the adjacency matrix of its line graph L(G) by the following theorem:

is the adjacency matrix of the line graph of G, B(G) is the incidence matrix, and

is the identity matrix of dimension m.

The definitions of incidence matrix apply to graphs with loops and multiple edges. The column of an oriented incidence matrix that corresponds to a loop is all zero, unless the graph is signed and the loop is negative; then the column is all zero except for ±2 in the row of its incident vertex.

, where p and q are the number of points and lines respectively, such that

Another example is a block design. Here X is a finite set of "points" and Y is a class of subsets of X, called "blocks", subject to rules that depend on the type of design. The incidence matrix is an important tool in the theory of block designs. For instance, it is used to prove the fundamental theorem of symmetric 2-designs, that the number of blocks equals the number of points.