Incircle and excircles of a triangle 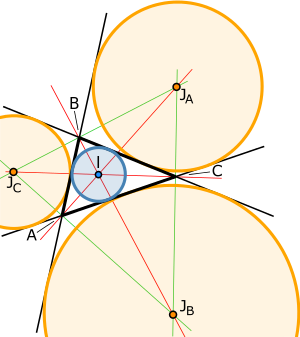 In geometry, the incircle or inscribed circle of a triangle is the largest circle contained in the triangle; it touches (is tangent to) the three sides. The center of the incircle is called the triangle's incenter.

Polygons with more than three sides do not all have an incircle tangent to all sides; those that do are called tangential polygons. See also Tangent lines to circles.

Relation to area of the triangle

The radii of the incircles and excircles are closely related to the area of the triangle.[2]

is right. Thus the radius C'I is an altitude of

has base length c and height r, and so has area

. Since these three triangles decompose

is the area of

For an alternative formula, consider

. The same is true for

. The large triangle is composed of 6 such triangles and the total area is:

The radii in the excircles are called the exradii. Let the excircle at side AB touch at side AC extended at G, and let this excircle's radius be

and its center be

is an altitude of

. By a similar argument,

By the law of cosines, we have

Combining this with the identity

which is Heron's formula.

, with equality holding only for equilateral triangles.[4] 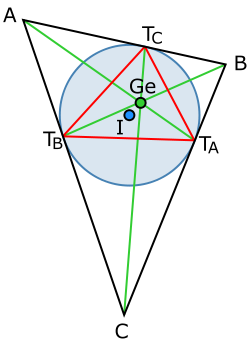 The Gergonne triangle (of ABC) is defined by the 3 touchpoints of the incircle on the 3 sides. Those vertices are denoted as TA, etc. The point that TA denotes, lies opposite to A.

This Gergonne triangle TATBTC is also known as the contact triangle or intouch triangle of ABC.

The three lines ATA, BTB and CTC intersect in a single point called Gergonne point, denoted as Ge - X(7). The Gergonne point lies in the open orthocentroidal disk punctured at its own center, and could be any point therein.[5]

Trilinear coordinates for the Gergonne point are given by

or, equivalently, by the Law of Sines,

The Nagel triangle of ABC is denoted by the vertices XA, XB and XC that are the three points where the excircles touch the reference triangle ABC and where XA is opposite of A, etc. This triangle XAXBXC is also known as the extouch triangle of ABC. The circumcircle of the extouch triangle XAXBXC is called the Mandart circle. The three lines AXA, BXB and CXC are called the splitters of the triangle; they each bisect the perimeter of the triangle, and they intersect in a single point, the triangle's Nagel point Na - X(8).

Trilinear coordinates for the Nagel point are given by

or, equivalently, by the Law of Sines,

The points of intersection of the interior angle bisectors of ABC with the segments BC,CA,AB are the vertices of the incentral triangle.

Euler's theorem states that in a triangle:

where R and rin are the circumradius and inradius respectively, and d is the distance between the circumcenter and the incenter.

For excircles the equation is similar:

where rex is the radius of one of the excircles, and d is the distance between the circumcenter and this excircle's center. [8] [9] [10]

Suppose the tangency points of the incircle divide the sides into lengths of x and y, y and z, and z and x. Then the incircle has the radius[11]

and the area of the triangle is

If the altitudes from sides of lengths a, b, and c are ha, hb, and hc then the inradius r is one-third of the harmonic mean of these altitudes, i.e.

Any line through a triangle that splits both the triangle's area and its perimeter in half goes through the triangle's incenter (the center of its incircle). There are either one, two, or three of these for any given triangle.[13]

Denoting the center of the incircle of triangle ABC as I, we have[14]

The distance from any vertex to the incircle tangency on either adjacent side is half the sum of the vertex's adjacent sides minus half the opposite side.[16] Thus for example for vertex B and adjacent tangencies TA and TC,

The incircle radius is no greater than one-ninth the sum of the altitudes.[17]:p. 289

The squared distance from the incenter I to the circumcenter O is given by[18]:p.232

and the distance from the incenter to the center N of the nine point circle is[18]:p.232

The incenter lies in the medial triangle (whose vertices are the midpoints of the sides).[18]:p.233, Lemma 1

where r is the incircle radius and s is the semiperimeter of the triangle.[20]

The following relations hold among the inradius r, the circumradius R, the semiperimeter s, and the excircle radii r'a, rb, rc:[12]

The circle through the centers of the three excircles has radius 2R.[12]

If H is the orthocenter of triangle ABC, then[12]

Generalization to other polygons

Some (but not all) quadrilaterals have an incircle. These are called tangential quadrilaterals. Among their many properties perhaps the most important is that their opposite sides have equal sums. This is called the Pitot theorem.

More generally, a polygon with any number of sides that has an inscribed circle—one that is tangent to each side—is called a tangential polygon.