In mathematics, the indefinite orthogonal group, O(p,q) is the Lie group of all linear transformations of a n-dimensional real vector space that leave invariant a nondegenerate, symmetric bilinear form of signature (p,q), where n = p + q. The dimension of the group is n(n − 1)/2.

The indefinite special orthogonal group, SO(p,q) is the subgroup of O(p,q) consisting of all elements with determinant 1. Unlike in the definite case, SO(p,q) is not connected – it has 2 components – and there are two additional finite index subgroups, namely the connected SO+(p,q) and O+(p,q), which has 2 components – see the topology section for definition and discussion.

The signature of the form determines the group up to isomorphism; interchanging p with q amounts to replacing the metric by its negative, and so gives the same group. If either p or q equals zero, then the group is isomorphic to the ordinary orthogonal group O(n). We assume in what follows that both p and q are positive.

The group O(p,q) is defined for vector spaces over the reals. For complex spaces, all groups O(p,q; C) are isomorphic to the usual orthogonal group O(p + q; C), since the transform

changes the signature of a form. 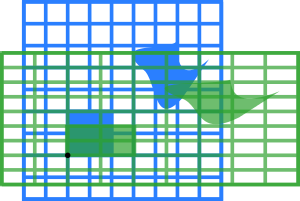 The basic example is the squeeze mappings, which is the group SO+(1,1) of (the identity component of) linear transforms preserving the unit hyperbola. Concretely, these are the matrices

In physics, the Lorentz group O(1,3) is of central importance, being the setting for electromagnetism and special relativity.

One can define O(p,q) as a group of matrices, just as for the classical orthogonal group O(n). The standard inner product on Rp,q is given in coordinates by the diagonal matrix:

As a quadratic form,

; as a bilinear form,

Here MT denotes the transpose of the matrix M. One can easily verify that the set of all such matrices forms a group. The inverse of M is given by

One obtains an isomorphic group (indeed, a conjugate subgroup of GL(V)) by replacing η with any symmetric matrix with p positive eigenvalues and q negative ones (such a matrix is necessarily nonsingular); equivalently, any quadratic form with signature (p,q). Diagonalizing this matrix gives a conjugation of this group with the standard group O(p,q).

Assuming both p and q are nonzero, neither of the groups O(p,q) or SO(p,q) are connected, having four and two components respectively. π0(O(p,q)) ≅ C2 × C2 is the Klein four-group, with each factor being whether an element preserves or reverses the respective orientations on the p and q dimensional subspaces on which the form is definite; note that reversing orientation on only one of these subspaces reverses orientation on the whole space. The special orthogonal group has components π0(SO(p,q)) = {(1,1),(−1,−1)} which either preserves both orientations or reverses both orientations, in either case preserving the overall orientation.

The identity component of O(p,q) is often denoted SO+(p,q) and can be identified with the set of elements in SO(p,q) which preserves both orientations. This notation is related to the notation O+(1,3) for the orthochronous Lorentz group, where the + refers to preserving the orientation on the first (temporal) dimension.

The case (1,1) corresponds to the split-complex numbers.