The point x is an interior point of S. The point y is on the boundary of S.

In mathematics, specifically in topology, the interior of a subset S of points of a topological space X consists of all points of S that do not belong to the boundary of S. A point that is in the interior of S is an interior point of S.

The exterior of a set is the interior of its complement, equivalently the complement of its closure; it consists of the points that are in neither the set nor its boundary. The interior, boundary, and exterior of a subset together partition the whole space into three blocks (or fewer when one or more of these is empty). The interior and exterior are always open while the boundary is always closed. Sets with empty interior have been called boundary sets.[1]

If S is a subset of a Euclidean space, then x is an interior point of S if there exists an open ball centered at x which is completely contained in S. (This is illustrated in the introductory section to this article.)

This definition generalizes to any subset S of a metric space X with metric d: x is an interior point of S if there exists r > 0, such that y is in S whenever the distance d(x, y) < r.

Interior of a set

Sometimes the second or third property above is taken as the definition of the topological interior.

Note that these properties are also satisfied if "interior", "subset", "union", "contained in", "largest" and "open" are replaced by "closure", "superset", "intersection", "which contains", "smallest", and "closed", respectively. For more on this matter, see interior operator below.

On the set of real numbers one can put other topologies rather than the standard one.

These examples show that the interior of a set depends upon the topology of the underlying space. The last two examples are special cases of the following.

The interior operator o is dual to the closure operator —, in the sense that

where X is the topological space containing S, and the backslash refers to the set-theoretic difference.

Therefore, the abstract theory of closure operators and the Kuratowski closure axioms can be easily translated into the language of interior operators, by replacing sets with their complements.

Exterior of a set

{{#invoke:main|main}} The exterior of a subset S of a topological space X, denoted ext(S) or Ext(S), is the interior int(X \ S) of its relative complement. Alternatively, it can be defined as X \ S—, the complement of the closure of S. Many properties follow in a straightforward way from those of the interior operator, such as the following.

Unlike the interior operator, ext is not idempotent, but the following holds: 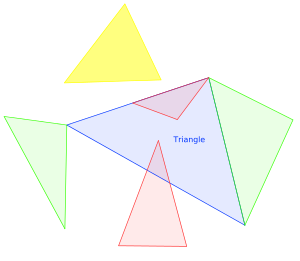