Introduction to mathematics of general relativity

The mathematics of general relativity are very complex. In Newton's theories of motions, an object's length and the rate of passage of time remain constant as it changes speed. As a result, many problems in Newtonian mechanics can be solved with algebra alone. In relativity, on the other hand, length, and the passage of time change as an object's speed approaches the speed of light. The additional variables greatly complicate calculations of an object's motion. As a result, relativity requires the use of vectors, tensors, pseudotensors, curvilinear coordinates and many other complicated mathematical concepts.

All the mathematics discussed in this article were understood before the proposal of Einstein's general theory of relativity. 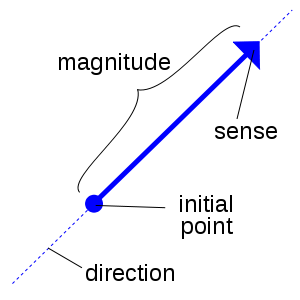 Illustration of a typical vector.

In mathematics, physics, and engineering, a Euclidean vector (sometimes called a geometric[1] or spatial vector,[2] or – as here – simply a vector) is a geometric object that has both a magnitude (or length) and direction. A vector is what is needed to "carry" the point A to the point B; the Latin word vector means "one who carries".[3] The magnitude of the vector is the distance between the two points and the direction refers to the direction of displacement from A to B. Many algebraic operations on real numbers such as addition, subtraction, multiplication, and negation have close analogues for vectors, operations which obey the familiar algebraic laws of commutativity, associativity, and distributivity. 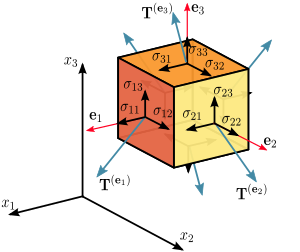 Stress, a second-order tensor. Stress is here shown as a series of vectors on each side of the box

A tensor extends the concept of a vector to additional dimensions. A scalar, that is, a simple set of numbers without direction, would be shown on a graph as a point, a zero-dimensional object. A vector, which has a magnitude and direction, would appear on a graph as a line, which is a one-dimensional object. A tensor extends this concept to additional dimensions. A two dimensional tensor would be called a second order tensor. This can be viewed as a set of related vectors, moving in multiple directions on a plane.

Vectors are fundamental in the physical sciences. They can be used to represent any quantity that has both a magnitude and direction, such as velocity, the magnitude of which is speed. For example, the velocity 5 meters per second upward could be represented by the vector (0,5) (in 2 dimensions with the positive y axis as 'up'). Another quantity represented by a vector is force, since it has a magnitude and direction. Vectors also describe many other physical quantities, such as displacement, acceleration, momentum, and angular momentum. Other physical vectors, such as the electric and magnetic field, are represented as a system of vectors at each point of a physical space; that is, a vector field.

In general relativity, four-dimensional vectors, or four-vectors, are required. These four dimensions are length, height, width and time. A "point" in this context would be an event, as it has both a location and a time. Similar to vectors, tensors in relativity require four dimensions. One example is the Riemann curvature tensor.

Coordinate transformation is important because relativity states that there is no one correct reference point in the universe. On earth, we use dimensions like north, east, and elevation, which are used throughout the entire planet. There is no such system for space. Without a clear reference grid, it becomes more accurate to describe the four dimensions as towards/away, left/right, up/down and past/future. As an example event, take the signing of the Declaration of Independence. To a modern observer on Mt Rainier looking east, the event is ahead, to the right, below, and in the past. However, to an observer in medieval England looking north, the event is behind, to the left, neither up nor down, and in the future. The event itself has not changed, the location of the observer has.

An oblique coordinate system is one in which the axes are not necessarily orthogonal to each other; that is, they meet at angles other than right angles.

A nontensor is a tensor-like quantity that behaves like a tensor in the raising and lowering of indices, but that does not transform like a tensor under a coordinate transformation. For example, Christoffel symbols cannot be tensors themselves if the coordinates don't change in a linear way. 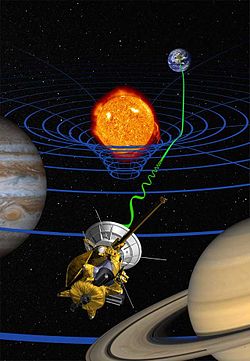 High-precision test of general relativity by the Cassini space probe (artist's impression): radio signals sent between the Earth and the probe (green wave) are delayed by the warping of space and time (blue lines) due to the Sun's mass. That is, the Sun's mass causes the regular grid coordinate system (in blue) to distort and have curvature. The radio wave then follows this curvature and moves toward the Sun.

Curvilinear coordinates are coordinates in which the angles between axes can change from point-to-point. This means that rather than having a grid of straight lines, the grid instead has curvature.

A good example of this is the surface of the Earth. While maps frequently portray north, south, east and west as a simple square grid, that is not, in fact, the case. Instead, the longitude lines, running north and south, are curved, and meet at the north pole. This is because the Earth is not flat, but instead round.

In general relativity, gravity has curvature effects on the four dimensions of the universe. A common analogy is placing a heavy object on a stretched out rubber sheet, causing the sheet to bend downward. This curves the coordinate system around the object, much like an object in the universe curves the coordinate system it sits in. The mathematics here are conceptually more complex than on Earth, as it results in 4 dimensions of curved coordinates instead of 3 as used to describe a curved 2D surface. 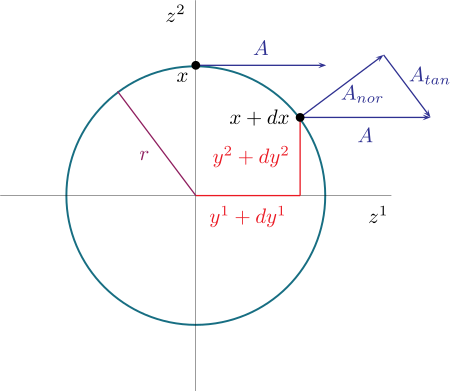 . The circle itself is characterized by coordinates

The interval is then

The interval is just equal to the arc length as expected.

The interval in a high-dimensional space

Christoffel symbol of the second kind

The constancy of the length of the parallel displaced vector

The Riemann tensor tells us, mathematically, how much curvature there is in any given region of space. Contracting the tensor produces 3 different mathematical objects:

Each of these is useful in the expression of Einstein's field equations.