There are many notations used for the inverse trigonometric functions. The notations sin−1 (x), cos−1 (x), tan−1 (x), etc. are often used, but this convention logically conflicts with the common semantics for expressions like sin2 (x), which refer to numeric power rather than function composition, and therefore may result in confusion between multiplicative inverse and compositional inverse. The confusion is somewhat ameliorated by the fact that each reciprocal trigonometric functions has its own name—for example, cos(x)−1=sec(x). Another convention used by some authors[2] is to use a majuscule (capital/upper-case) first letter along with a −1 superscript, e.g., Sin−1 (x), Cos−1 (x), etc., which avoids confusing them with the multiplicative inverse, which should be represented by sin−1 (x), cos−1 (x), etc. Yet another convention is to use an arc- prefix, so that the confusion with the −1 superscript is resolved completely, e.g., arcsin (x), arccos (x), etc. This convention is used throughout the article. In computer programming languages the inverse trigonometric functions are usually called asin, acos, atan.

Etymology of the arc- prefix

For example, using function in the sense of multivalued functions, just as the square root function y = √Template:Overline could be defined from y2 = x, the function y = arcsin(x) is defined so that sin(y) = x. There are multiple numbers y such that sin(y) = x; for example, sin(0) = 0, but also sin(π) = 0, sin(2π) = 0, etc. When only one value is desired, the function may be restricted to its principal branch. With this restriction, for each x in the domain the expression arcsin(x) will evaluate only to a single value, called its principal value. These properties apply to all the inverse trigonometric functions.

The principal inverses are listed in the following table.

If x is allowed to be a complex number, then the range of y applies only to its real part.

Relationships among the inverse trigonometric functions 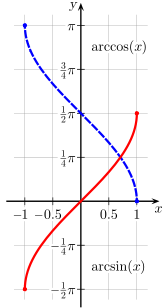 The usual principal values of the arcsin(x) (red) and arccos(x) (blue) functions graphed on the cartesian plane. 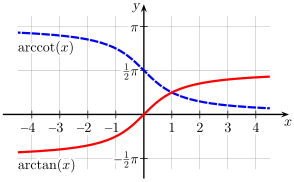 The usual principal values of the arctan(x) and arccot(x) functions graphed on the cartesian plane.

Principal values of the arcsec(x) and arccsc(x) functions graphed on the cartesian plane.

If you only have a fragment of a sine table:

Whenever the square root of a complex number is used here, we choose the root with the positive real part (or positive imaginary part if the square was negative real).

From the half-angle formula

This is derived from the tangent addition formula

The derivatives for complex values of z are as follows:

Only for real values of x:

For a sample derivation: if

Integrating the derivative and fixing the value at one point gives an expression for the inverse trigonometric function as a definite integral:

When x equals 1, the integrals with limited domains are improper integrals, but still well-defined.

Like the sine and cosine functions, the inverse trigonometric functions can be calculated using infinite series, as follows:

Leonhard Euler found a more efficient series for the arctangent, which is:

Alternatively, this can be expressed:

Two alternatives to the power series for arctangent are these generalized continued fractions:

The second of these is valid in the cut complex plane. There are two cuts, from −i to the point at infinity, going down the imaginary axis, and from i to the point at infinity, going up the same axis. It works best for real numbers running from −1 to 1. The partial denominators are the odd natural numbers, and the partial numerators (after the first) are just (nz)2, with each perfect square appearing once. The first was developed by Leonhard Euler; the second by Carl Friedrich Gauss utilizing the Gaussian hypergeometric series.

For real and complex values of x:

All of these can be derived using integration by parts and the simple derivative forms shown above.

Back-substitute for x to yield

Since the inverse trigonometric functions are analytic functions, they can be extended from the real line to the complex plane. This results in functions with multiple sheets and branch points. One possible way of defining the extensions is:

where the part of the imaginary axis which does not lie strictly between −i and +i is the cut between the principal sheet and other sheets;

where (the square-root function has its cut along the negative real axis and) the part of the real axis which does not lie strictly between −1 and +1 is the cut between the principal sheet of arcsin and other sheets;

which has the same cut as arcsin;

which has the same cut as arctan;

where the part of the real axis between −1 and +1 inclusive is the cut between the principal sheet of arcsec and other sheets;

which has the same cut as arcsec.

These functions may also be expressed using complex logarithms. This extends in a natural fashion their domain to the complex plane.

Elementary proofs of these relations proceed via expansion to exponential forms of the trigonometric functions.

Using the exponential definition of sine

(the positive branch is chosen)

Apply the natural logarithm, multiply by -i and substitute theta.

This periodicity is reflected in the general inverses where k is some integer:

Which, written in one equation, is:

Which, written in one equation, is:

Application: finding the angle of a right triangle 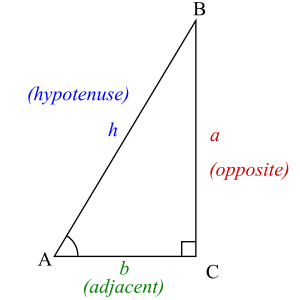 Inverse trigonometric functions are useful when trying to determine the remaining two angles of a right triangle when the lengths of the sides of the triangle are known. Recalling the right-triangle definitions of sine, for example, it follows that

Often, the hypotenuse is unknown and would need to be calculated before using arcsine or arccosine using the Pythagorean Theorem:

For example, suppose a roof drops 8 feet as it runs out 20 feet. The roof makes an angle θ with the horizontal, where θ may be computed as follows:

In computer science and engineering

{{safesubst:#invoke:anchor|main}} {{#invoke:main|main}} The two-argument atan2 function computes the arctangent of y / x given y and x, but with a range of (−π, π]. In other words, atan2(y, x) is the angle between the positive x-axis of a plane and the point (x, y) on it, with positive sign for counter-clockwise angles (upper half-plane, y > 0), and negative sign for clockwise angles (lower half-plane, y < 0). It was first introduced in many computer programming languages, but it is now also common in other fields of science and engineering.

In terms of the standard arctan function, that is with range of (−π/2, π/2), it can be expressed as follows:

It also equals the principal value of the argument of the complex number x + iy.

This function may also be defined using the tangent half-angle formulae as follows:

provided that either x > 0 or y ≠ 0. However this fails if given x ≤ 0 and y = 0 so the expression is unsuitable for computational use.

The above argument order (y, x) seems to be the most common, and in particular is used in ISO standards such as the C programming language, but a few authors may use the opposite convention (x, y) so some caution is warranted. These variations are detailed at atan2.

In many applicationsTemplate:Which the solution

is to come as close as possible to a given value

. The adequate solution is produced by the parameter modified arctangent function

rounds to the nearest integer.

For angles near 0 and π, arccosine is ill-conditioned and will thus calculate the angle with reduced accuracy in a computer implementation (due to the limited number of digits). Similarly, arcsine is inaccurate for angles near −π/2 and π/2. To achieve full accuracy for all angles, arctangent or atan2 should be used for the implementation.