Klein's Template:Mvar-invariant in the complex plane

In mathematics, Klein's j-invariant, regarded as a function of a complex variable τ, is a modular function of weight zero for SL(2, Z) defined on the upper half-plane of complex numbers. It is the unique such function which is holomorphic away from a simple pole at the cusp such that

Rational functions of Template:Mvar are modular, and in fact give all modular functions. Classically, the Template:Mvar-invariant was studied as a parameterization of elliptic curves over C, but it also has surprising connections to the symmetries of the Monster group (this connection is referred to as monstrous moonshine). 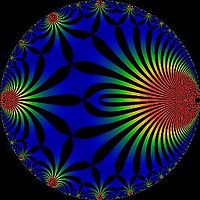 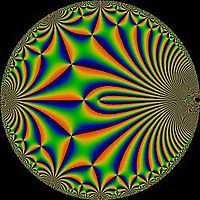 Phase of the Template:Mvar-invariant as a function of the nome q on the unit disk

While the Template:Mvar-invariant can be defined purely in terms of certain infinite sums (see g2, g3 below), these can be motivated by considering isomorphism classes of elliptic curves. Every elliptic curve Template:Mvar over C is a complex torus, and thus can be identified with a rank 2 lattice; i.e., two-dimensional lattice of C. This is done by identifying opposite edges of each parallelogram in the lattice. It turns out that multiplying the lattice by complex numbers, which corresponds to rotating and scaling the lattice, preserves the isomorphism class of the elliptic curve, and thus we can consider the lattice generated by 1 and some Template:Mvar in H (where H is the Upper half-plane). Conversely, if we define

then this lattice corresponds to the elliptic curve over C defined by y2 = 4x3 − g2x - g3 via the Weierstrass elliptic functions. Then the Template:Mvar-invariant is defined as

where the modular discriminant Δ is

It can be shown that Δ is a modular form of weight twelve, and g2 one of weight four, so that its third power is also of weight twelve. Thus their quotient, and therefore Template:Mvar, is a modular function of weight zero, in particular a meromorphic function H → C invariant under the action of SL(2, Z). As explained below, Template:Mvar is surjective, which means that it gives a bijection between isomorphism classes of elliptic curves over C and the complex numbers. 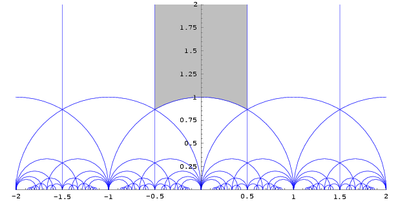 The fundamental domain of the modular group acting on the upper half plane.

The two transformations τ → τ + 1 and τ → τ−1 together generate a group called the modular group, which we may identify with the projective special linear group PSL(2, Z). By a suitable choice of transformation belonging to this group,

The Template:Mvar-invariant has many remarkable properties:

These classical results are the starting point for the theory of complex multiplication.

The Template:Mvar function has numerous other transcendental properties. Kurt Mahler conjectured a particular transcendence result that is often referred to as Mahler's conjecture, though it was proved as a corollary of results by Yu. V. Nesternko and Patrice Phillipon in the 1990s. Mahler's conjecture was that if Template:Mvar was in the upper half plane then exp(2πiτ) and j(τ) were never both simultaneously algebraic. Stronger results are now known, for example if exp(2πiτ) is algebraic then the following three numbers are algebraically independent, and thus at least two of them transcendental:

Several remarkable properties of Template:Mvar have to do with its [[q-expansion|Template:Mvar-expansion]] (Fourier series expansion), written as a Laurent series in terms of q = exp(2πiτ), which begins:

Note that Template:Mvar has a simple pole at the cusp, so its Template:Mvar-expansion has no terms below q−1.

All the Fourier coefficients are integers, which results in several almost integers, notably Ramanujan's constant:

The asymptotic formula for the coefficient of qn is given by

as can be proved by Hardy–Littlewood circle method.[2][3]

More remarkably, the Fourier coefficients for the positive exponents of Template:Mvar are the dimensions of the graded part of an infinite-dimensional graded algebra representation of the monster group called the moonshine module – specifically, the coefficient of qn is the dimension of grade-Template:Mvar part of the moonshine module, the first example being the Griess algebra, which has dimension 196,884, corresponding to the term 196884q. This startling observation was the starting point for moonshine theory.

The study of the Moonshine conjecture led J.H. Conway and Simon P. Norton to look at the genus-zero modular functions. If they are normalized to have the form

where x = λ(1−λ) and Template:Mvar is the modular lambda function

a ratio of Jacobi theta functions

, and is the square of the elliptic modulus

.[5] The value of Template:Mvar is unchanged when λ is replaced by any of the six values of the cross-ratio:[6]

and the Jacobi theta function,

from which one can derive the auxiliary theta functions. Let,

are alternative notations, and

for Weierstrass invariants g2, g3, and Dedekind eta function η(τ). We can then express j(τ) in a form which can rapidly be computed.

So far we have been considering Template:Mvar as a function of a complex variable. However, as an invariant for isomorphism classes of elliptic curves, it can be defined purely algebraically. Let

be a plane elliptic curve over any field. Then we may define

the latter expression is the discriminant of the curve.

The Template:Mvar-invariant for the elliptic curve may now be defined as

In the case that the field over which the curve is defined has characteristic different from 2 or 3, this definition can also be written as

The inverse function of the Template:Mvar-invariant can be expressed in terms of the hypergeometric function 2F1 (see also the article Picard–Fuchs equation). Explicitly, given a number Template:Mvar, to solve the equation j(τ) = N for Template:Mvar can be done in at least four ways.

Method 1: Solving the sextic in Template:Mvar,

where Template:Mvar is the modular lambda function. Let x = λ(1−λ) and the sextic can be solved as a cubic in Template:Mvar. Then,

for any of the six values of Template:Mvar.

Method 2: Solving the quartic in Template:Mvar,

then for any of the four roots,

Method 3: Solving the cubic in Template:Mvar,

then for any of the three roots,

Method 4: Solving the quadratic in Template:Mvar,

One root gives Template:Mvar, and the other gives 1/τ, but since j(τ) = j(1/τ), then it doesn't make a difference which Template:Mvar is chosen. The latter three methods can be found in Ramanujan's theory of elliptic functions to alternative bases.

The inversion is highly relevant to applications via enabling high-precision calculations of elliptic functions periods even as their ratios become unbounded. A related result is the expressibility via quadratic radicals of the values of Template:Mvar at the points of the imaginary axis whose magnitudes are powers of 2 (thus permitting compass and straightedge constructions). The latter result is hardly evident since the modular equation of level 2 is cubic.

The Chudnovsky brothers found in 1987,

and uses the fact that

The Template:Mvar-invariant vanishes at the "corner" of the fundamental domain at

Here are a few more special values (only the first four of which are well known; in what follows, Template:Mvar means J/1728 throughout):

Several special values were calculated in 2014:[8]

All preceding values are real. A complex conjugate pair might be inferred exploiting the symmetry described in the reference, along with the values for

|CitationClass=citation }}. Provides a variety of interesting algebraic identities, including the inverse as a hypergeometric series.

|CitationClass=citation }}. Provides a short review in the context of modular forms.