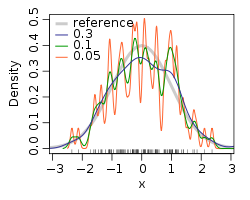 In statistics, kernel density estimation (KDE) is a non-parametric way to estimate the probability density function of a random variable. Kernel density estimation is a fundamental data smoothing problem where inferences about the population are made, based on a finite data sample. In some fields such as signal processing and econometrics it is also termed the Parzen–Rosenblatt window method, after Emanuel Parzen and Murray Rosenblatt, who are usually credited with independently creating it in its current form.[1][2]

Let (x1, x2, …, xn) be an independent and identically distributed sample drawn from some distribution with an unknown density ƒ. We are interested in estimating the shape of this function ƒ. Its kernel density estimator is

where K(•) is the kernel — a non-negative function that integrates to one and has mean zero — and h > 0 is a smoothing parameter called the bandwidth. A kernel with subscript h is called the scaled kernel and defined as Kh(x) = 1/h K(x/h). Intuitively one wants to choose h as small as the data allow, however there is always a trade-off between the bias of the estimator and its variance; more on the choice of bandwidth below.

A range of kernel functions are commonly used: uniform, triangular, biweight, triweight, Epanechnikov, normal, and others. The Epanechnikov kernel is optimal in a mean square error sense,[3] though the loss of efficiency is small for the kernels listed previously,[4] and due to its convenient mathematical properties, the normal kernel is often used K(x) = ϕ(x), where ϕ is the standard normal density function.

The construction of a kernel density estimate finds interpretations in fields outside of density estimation. For example, in thermodynamics, this is equivalent to the amount of heat generated when heat kernels (the fundamental solution to the heat equation) are placed at each data point locations xi. Similar methods are used to construct discrete Laplace operators on point clouds for manifold learning.

Kernel density estimates are closely related to histograms, but can be endowed with properties such as smoothness or continuity by using a suitable kernel. To see this, we compare the construction of histogram and kernel density estimators, using these 6 data points: x1 = −2.1, x2 = −1.3, x3 = −0.4, x4 = 1.9, x5 = 5.1, x6 = 6.2. For the histogram, first the horizontal axis is divided into sub-intervals or bins which cover the range of the data. In this case, we have 6 bins each of width 2. Whenever a data point falls inside this interval, we place a box of height 1/12. If more than one data point falls inside the same bin, we stack the boxes on top of each other.

The bandwidth of the kernel is a free parameter which exhibits a strong influence on the resulting estimate. To illustrate its effect, we take a simulated random sample from the standard normal distribution (plotted at the blue spikes in the rug plot on the horizontal axis). The grey curve is the true density (a normal density with mean 0 and variance 1). In comparison, the red curve is undersmoothed since it contains too many spurious data artifacts arising from using a bandwidth h = 0.05, which is too small. The green curve is oversmoothed since using the bandwidth h = 2 obscures much of the underlying structure. The black curve with a bandwidth of h = 0.337 is considered to be optimally smoothed since its density estimate is close to the true density.

The most common optimality criterion used to select this parameter is the expected L2 risk function, also termed the mean integrated squared error:

for a function g,

and ƒ'' is the second derivative of ƒ. The minimum of this AMISE is the solution to this differential equation

Neither the AMISE nor the hAMISE formulas are able to be used directly since they involve the unknown density function ƒ or its second derivative ƒ'', so a variety of automatic, data-based methods have been developed for selecting the bandwidth. Many review studies have been carried out to compare their efficacities,[6][7][8][9][10] with the general consensus that the plug-in selectors[11] and cross validation selectors[12][13][14] are the most useful over a wide range of data sets.

Substituting any bandwidth h which has the same asymptotic order n−1/5 as hAMISE into the AMISE gives that AMISE(h) = O(n−4/5), where O is the big o notation. It can be shown that, under weak assumptions, there cannot exist a non-parametric estimator that converges at a faster rate than the kernel estimator.[15] Note that the n−4/5 rate is slower than the typical n−1 convergence rate of parametric methods.

If the bandwidth is not held fixed, but is varied depending upon the location of either the estimate (balloon estimator) or the samples (pointwise estimator), this produces a particularly powerful method termed adaptive or variable bandwidth kernel density estimation.

Practical estimation of the bandwidth

If Gaussian basis functions are used to approximate univariate data, and the underlying density being estimated is Gaussian then it can be shown that the optimal choice for h is[16]

Knowing the characteristic function, it is possible to find the corresponding probability density function through the Fourier transform formula. One difficulty with applying this inversion formula is that it leads to a diverging integral, since the estimate

is unreliable for large t’s. To circumvent this problem, the estimator

is multiplied by a damping function ψh(t) = ψ(ht), which is equal to 1 at the origin and then falls to 0 at infinity. The “bandwidth parameter” h controls how fast we try to dampen the function

. In particular when h is small, then ψh(t) will be approximately one for a large range of t’s, which means that

remains practically unaltered in the most important region of t’s.

For this example, the data are a synthetic sample of 50 points drawn from the standard normal and 50 points from a normal distribution with mean 3.5 and variance 1. The automatic bandwidth selection and density estimation with normal kernels is carried out by kde.m. This function implements an automatic bandwidth selector that does not rely on the commonly used Gaussian plug-in rule of thumb heuristic.[18]

This example is based on the Old Faithful Geyser, a tourist attraction located in Yellowstone National Park. This famous dataset containing 272 records consists of two variables, eruption duration, and waiting time until next eruption, both in minutes, included in the base distribution of R. We analyse the waiting times, using the ks library since it has a wide range of visualisation options. The bandwidth function is hpi which in turn calls the dpik function in the KernSmooth library: these functions implement the plug-in selector.[11] The kernel density estimate using the normal kernel is computed using kde which calls bkde from KernSmooth. The plot function allows the addition of the data points as a rug plot on the horizontal axis. The bimodal structure in the density estimate of the waiting times is clearly seen, in contrast to the rug plot where this structure is not apparent.

Kernel density estimate of a mixture of normals.

The plot shows both a histogram of the simulated data, along with a red line that shows the Gaussian KDE.