File:GreenRectangularCross.png
The symmetry group of this cross is the Klein four-group. It can be flipped horizontally (a) or vertically (b) or both (ab) and remain unchanged. Unlike a square, though, a quarter-turn rotation will change the figure.

In mathematics, the Klein four-group (or just Klein group or Vierergruppe (Template:Lang-en), often symbolized by the letter V or as K4) is the group Z2 × Z2, the direct product of two copies of the cyclic group of order 2. It was named Vierergruppe by Felix Klein in his Vorlesungen über das Ikosaeder und die Auflösung der Gleichungen vom fünften Grade (Lectures on the icosahedron and the solution of equations of the fifth degree) in 1884.

The Klein group's Cayley table is given by:

It is also given by the group presentation

The Klein four-group is the smallest non-cyclic group. All non-identity elements of the Klein group have order 2. It is abelian, and isomorphic to the dihedral group of order (cardinality) 4. It is also isomorphic to the direct sum Z2 ⊕ Z2, so that it can be represented as the bit strings {00, 01, 10, 11} under bitwise XOR.

In 2D it is the symmetry group of a rhombus and of a rectangle which are not squares, the four elements being the identity, the vertical reflection, the horizontal reflection, and a 180 degree rotation.

In 3D there are three different symmetry groups that are algebraically the Klein four-group V:

The Klein four-group's permutations of its own elements can be thought of abstractly as its permutation representation on 4 points: 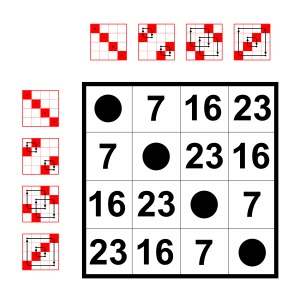 Other permutations of four objects, forming V as well

In this representation, V is a normal subgroup of the alternating group A4 (and also the symmetric group S4) on 4 letters. In fact, it is the kernel of a surjective group homomorphism from S4 to S3. According to Galois theory, the existence of the Klein four-group (and in particular, this representation of it) explains the existence of the formula for calculating the roots of quartic equations in terms of radicals, as established by Lodovico Ferrari: the map S4 → S3 corresponds to the resolvent cubic, in terms of Lagrange resolvents.

In the construction of finite rings, eight of the eleven rings with four elements have the Klein four-group as their additive substructure.

If R× denotes the multiplicative group of non-zero reals and R+ the multiplicative group of positive reals, R× × R× is the group of units of the ring R×R and R+ × R+ is a subgroup of R× × R× (in fact it is the component of the identity of R× × R×). The quotient group (R× × R×) / (R+ × R+) is isomorphic to the Klein four-group. In a similar fashion, the group of units of the split-complex number ring, when divided by its identity component, also results in the Klein four-group.

In music composition the four-group is the basic group of permutations in the twelve-tone technique. In that instance the Cayley table is written;[1]