The Klein quartic is a quotient of the order-7 triangular tiling. 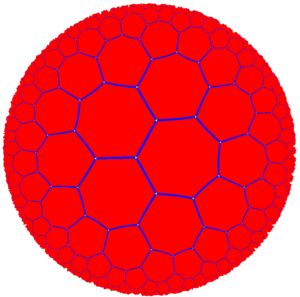 Dually, the Klein quartic is a quotient of the dual tiling, the order-3 heptagonal tiling.

Klein's quartic occurs in many branches of mathematics, in contexts including representation theory, homology theory, octonion multiplication, Fermat's last theorem, and the Stark-Heegner theorem on imaginary quadratic number fields of class number one; see Template:Harv for a survey of properties.

Originally, the "Klein quartic" referred specifically to the subset of the complex projective plane CP2 defined by the equation given in the As an algebraic curve section. This has a specific Riemannian metric (that makes it a minimal surface in CP2), under which its Gaussian curvature is not constant. But more commonly (as in this article) it is now thought of as any Riemann surface that is conformally equivalent to this algebraic curve, and especially the one that is a quotient of the hyperbolic plane H2 by a certain cocompact group G that acts freely on H2 by isometries. This gives the Klein quartic a Riemannian metric of constant negative curvature = −1 that it inherits from H2. This set of conformally equivalent Riemannian surfaces is precisely the same as all compact Riemannian surfaces of genus 3 whose conformal automorphism group is isomorphic to the unique simple group of order 168. This group is also known as PSL(2, Z/7Z), and also as the isomorphic group PSL(3, Z/2Z). By covering space theory, the group G mentioned above is isomorphic to the fundamental group of the compact surface of genus 3.

It is important to distinguish two different forms of the quartic. The closed quartic is what is generally meant in geometry; topologically it has genus 3 and is a compact space. The open or "punctured" quartic is of interest in number theory; topologically it is a genus 3 surface with 24 punctures, and geometrically these punctures are cusps. The open quartic may be obtained (topologically) from the closed quartic by puncturing at the 24 centers of the tiling by regular heptagons, as discussed below. The open and closed quartics have different metrics, though they are both hyperbolic and complete[1] – geometrically, the cusps are "points at infinity", not holes, hence the open quartic is still complete.

As an algebraic curve

The Klein quartic can be viewed as a projective algebraic curve over the complex numbers C, defined by the following quartic equation in homogeneous coordinates [x:y:z] on CP2:

The locus of this equation in CP2 is the original Riemannian surface that Klein described.

in the ring of integers

as a prime factor of 7 in the ring of integers.

in the quaternion algebra, Γ(I) is then the group of norm 1 elements in

. The least absolute value of a trace of a hyperbolic element in Γ(I) is

, corresponding the value 3.936 for the systole of the Klein quartic, one of the highest in this genus.

The tiling of the quartic by reflection domains is a quotient of the order-3 bisected heptagonal tiling.

The Klein quartic admits tilings connected with the symmetry group (a "regular map"[2]), and these are used in understanding the symmetry group, dating back to Klein's original paper. Given a fundamental domain for the group action (for the full, orientation-reversing symmetry group, a (2,3,7) triangle), the reflection domains (images of this domain under the group) give a tiling of the quartic such that the automorphism group of the tiling equals the automorphism group of the surface – reflections in the lines of the tiling correspond to the reflections in the group (reflections in the lines of a given fundamental triangle give a set of 3 generating reflections). This tiling is a quotient of the order-3 bisected heptagonal tiling of the hyperbolic plane (the universal cover of the quartic), and all Hurwitz surfaces are tiled in the same way, as quotients.

This tiling is uniform but not regular (it is by scalene triangles), and often regular tilings are used instead. A quotient of any tiling in the (2,3,7) family can be used (and will have the same automorphism group); of these, the two regular tilings are the tiling by 24 regular hyperbolic heptagons, each of degree 3 (meeting at 56 vertices), and the dual tiling by 56 equilateral triangles, each of degree 7 (meeting at 24 vertices). The order of the automorphism group is related, being the number of polygons times the number of edges in the polygon in both cases.

The covering tilings on the hyperbolic plane are the order-3 heptagonal tiling and the order-7 triangular tiling.

The automorphism group can be augmented (by a symmetry which is not realized by a symmetry of the tiling) to yield the Mathieu group M24.[3]

Corresponding to each tiling of the quartic (partition of the quartic variety into subsets) is an abstract polyhedron, which abstracts from the geometry and only reflects the combinatorics of the tiling (this is a general way of obtaining an abstract polytope from a tiling) – the vertices, edges, and faces of the polyhedron are equal as sets to the vertices, edges, and faces of the tiling, with the same incidence relations, and the (combinatorial) automorphism group of the abstract polyhedron equals the (geometric) automorphism group of the quartic. In this way the geometry reduces to combinatorics.

The above is a tiling of the projective quartic (a closed manifold); the affine quartic has 24 cusps (topologically, punctures), which correspond to the 24 vertices of the regular triangular tiling, or equivalently the centers of the 24 heptagons in the heptagonal tiling, and can be realized as follows.

Considering the action of SL(2,R) on the upper half-plane model H2 of the hyperbolic plane by Möbius transformations, the affine Klein quartic can be realized as the quotient Γ(7)\H2. (Here Γ(7) is the congruence subgroup of SL(2,Z) consisting of matrices that are congruent to the identity matrix when all entries are taken modulo 7.)

However, many 3-dimensional models of the Klein quartic have been given, starting in Klein's original paper,[2][4][5][6][7] which seek to demonstrate features of the quartic and preserve the symmetries topologically, though not all geometrically. The resulting models most often have either tetrahedral (order 12) or octahedral (order 24) symmetries; the remaining order 7 symmetry cannot be as easily visualized, and in fact is the title of Klein's paper.

Most often, the quartic is modeled either by a smooth genus 3 surface with tetrahedral symmetry (replacing the edges of a regular tetrahedron with tubes/handles yields such a shape), which have been dubbed "tetruses",[7] or by polyhedral approximations, which have been dubbed "tetroids";[7] in both cases this is an embedding of the shape in 3 dimensions. The most notable smooth model (tetrus) is the sculpture The Eightfold Way by Helaman Ferguson at the Mathematical Sciences Research Institute in Berkeley, California, made of marble and serpentine, and unveiled on November 14, 1993. The title refers to the fact that starting at any vertex of the triangulated surface and moving along any edge, if you alternately turn left and right when reaching a vertex, you always return to the original point after eight edges. The acquisition of the sculpture led in due course to the publication of a book of papers Template:Harv, detailing properties of the quartic and containing the first English translation of Klein's paper. Polyhedral models with tetrahedral symmetry most often have convex hull a truncated tetrahedron – see Template:Harv and Template:Harv for examples and illustrations. Some of these models consist of 20 triangles or 56 triangles (abstractly, the regular skew polyhedron {3,7|,4}, with 56 faces, 84 edges, and 24 vertices), which cannot be realized as equilateral, with twists in the arms of the tetrahedron; while others have 24 heptagons – these heptagons can be taken to be planar, though non-convex,[8] and the models are more complex than the triangular ones because the complexity is reflected in the shapes of the (non-flexible) heptagonal faces, rather than in the (flexible) vertices.[2]

The small cubicuboctahedron is a polyhedral immersion of the tiling of the Klein quartic with octahedral symmetry.

Alternatively, the quartic can be modeled by a polyhedron with octahedral symmetry: Klein modeled the quartic by a shape with octahedral symmetries and with points at infinity (an "open polyhedron"),[5] namely three hyperboloids meeting on orthogonal axes,[2] while it can also be modeled as a closed polyhedron which must be immersed (have self-intersections), not embedded.[2] Such polyhedra may have various convex hulls, including the truncated cube,[9] the snub cube,[8] or the rhombicuboctahedron, as in the small cubicuboctahedron at right.[3] The small cubicuboctahedron immersion is obtained by joining some of the triangles (2 triangles form a square, 6 form an octagon), which can be visualized by coloring the triangles (the corresponding tiling is topologically but not geometrically the t0,1{4, 3, 3} tiling). This immersion can also be used to geometrically construct the Mathieu group M24 by adding to PSL(2,7) the permutation which interchanges opposite points of the bisecting lines of the squares and octagons.[3]

The dessin d'enfant on the Klein quartic associated with the quotient map by its automorphism group (with quotient the Riemann sphere) is precisely the 1-skeleton of the order-3 heptagonal tiling.[10] That is, the quotient map is ramified over the points 0, 1728, and ∞; dividing by 1728 yields a Belyi function (ramified at 0, 1, and ∞), where the 56 vertices (black points in dessin) lie over 0, the midpoints of the 84 edges (white points in dessin) lie over 1, and the centers of the 24 heptagons lie over infinity. The resulting dessin is a "platonic" dessin, meaning edge-transitive and "clean" (each white point has valence 2).

The Klein quartic is related to various other surfaces.

Geometrically, it is the smallest Hurwitz surface (lowest genus); the next is the Macbeath surface (genus 7), and the following is the First Hurwitz triplet (3 surfaces of genus 14). More generally, it is the most symmetric surface of a given genus (being a Hurwitz surface); in this class, the Bolza surface is the most symmetric genus 2 surface, while Bring's surface is a highly symmetric genus 4 surface – see isometries of Riemann surfaces for further discussion.

More subtly, the (projective) Klein quartic is a Shimura curve (as are the Hurwitz surface of genus 7 and 14), and as such parametrizes principally polarized abelian varieties of dimension 6.[11]

More exceptionally, the Klein quartic forms part of a "trinity" in the sense of Vladimir Arnold, which can also be described as a McKay correspondence. In this collection, the projective special linear groups PSL(2,5), PSL(2,7), and PSL(2,11) (orders 60, 168, 660) are analogous, corresponding to icosahedral symmetry (genus 0), the symmetries of the Klein quartic (genus 3), and the buckyball surface (genus 70).[12] These are further connected to many other exceptional phenomena, which is elaborated at "trinities".