The Lagrangian points (Template:IPAc-en; also Lagrange points, L-points, or libration points) are the five positions in an orbital configuration where a small object affected only by gravity can maintain a stable orbital configuration with respect to two larger objects (such as a satellite with respect to the Sun and Earth). The Lagrange points mark positions where the combined gravitational pull of the two large masses provides precisely the centripetal force required to orbit with them. 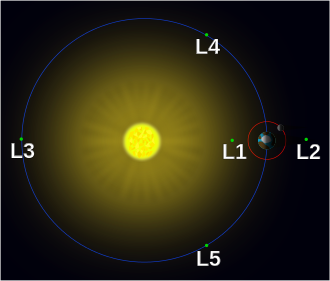 Lagrange points in the Sun-Earth system (not to scale)

The five Lagrangian points are labeled and defined as follows:

The Template:L3 point lies on the line defined by the two large masses, beyond the larger of the two.

Example: Template:L3 in the Sun–Earth system exists on the opposite side of the Sun, a little outside Earth's orbit but slightly closer to the Sun than Earth is. (This apparent contradiction is because the Sun is also affected by Earth's gravity, and so orbits around the two bodies' barycenter, which is, however, well inside the body of the Sun.) At the Template:L3 point, the combined pull of Earth and Sun again causes the object to orbit with the same period as Earth. 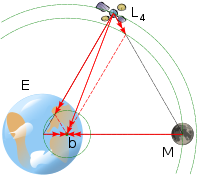 The Template:L4 and Template:L5 points lie at the third corners of the two equilateral triangles in the plane of orbit whose common base is the line between the centers of the two masses, such that the point lies behind (Template:L5) or ahead (Template:L4) of the smaller mass with regard to its orbit around the larger mass.

The triangular points (Template:L4 and Template:L5) are stable equilibria, provided that the ratio of M1/M2 is greater than 24.96.[note 1][2] This is the case for the Sun–Earth system, the Sun–Jupiter system, and, by a smaller margin, the Earth–Moon system. When a body at these points is perturbed, it moves away from the point, but the factor opposite of that which is increased or decreased by the perturbation (either gravity or angular momentum-induced speed) will also increase or decrease, bending the object's path into a stable, kidney-bean-shaped orbit around the point (as seen in the corotating frame of reference).

Other examples of natural objects orbiting at Lagrange points: 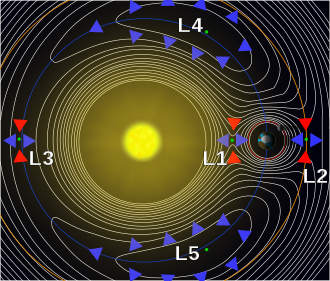 A contour plot of the effective potential due to gravity and the centrifugal force of a two-body system in a rotating frame of reference. The arrows indicate the gradients of the potential around the five Lagrange points—downhill toward them (red) or away from them (blue). Counterintuitively, the L4 and L5 points are the high points of the potential. At the points themselves these forces are balanced.

Visualisation of the relationship between the Lagrangian points (red) of a planet (blue) orbiting a star (yellow) anticlockwise, and the effective potential in the plane containing the orbit (grey rubber-sheet model with purple contours of equal potential).[7]
Click for animation.

Lagrangian points are the constant-pattern solutions of the restricted three-body problem. For example, given two massive bodies in orbits around their common barycenter, there are five positions in space where a third body, of comparatively negligible mass, could be placed so as to maintain its position relative to the two massive bodies. As seen in a rotating reference frame that matches the angular velocity of the two co-orbiting bodies, the gravitational fields of two massive bodies combined with the minor body's centrifugal force are in balance at the Lagrangian points, allowing the smaller third body to be relatively stationary with respect to the first two.[8]

The location of L1 is the solution to the following equation balancing gravitation and centrifugal force:

This distance can be described as being such that the orbital period, corresponding to a circular orbit with this distance as radius around M2 in the absence of M1, is that of M2 around M1, divided by

The location of L2 is the solution to the following equation balancing gravitation and inertia:

The location of L3 is the solution to the following equation balancing gravitation and centrifugal force:

The reason these points are in balance is that, at Template:L4 and Template:L5, the distances to the two masses are equal. Accordingly, the gravitational forces from the two massive bodies are in the same ratio as the masses of the two bodies, and so the resultant force acts through the barycenter of the system; additionally, the geometry of the triangle ensures that the resultant acceleration is to the distance from the barycenter in the same ratio as for the two massive bodies. The barycenter being both the center of mass and center of rotation of the three-body system, this resultant force is exactly that required to keep the smaller body at the Lagrange point in orbital equilibrium with the other two larger bodies of system. (Indeed, the third body need not have negligible mass). The general triangular configuration was discovered by Lagrange in work on the three-body problem.

In 1772, Joseph-Louis Lagrange published an "Essay on the three-body problem". In the first chapter he considered the general three-body problem. From that, in the second chapter, he demonstrated two special constant-pattern solutions, the collinear and the equilateral, for any three masses, with circular orbits.[11] Thence, if one mass is made negligible, one immediately gets the five positions now known as the Lagrange Points; but Lagrange himself apparently did not note that.Template:OR

Although the Template:L1, Template:L2, and Template:L3 points are nominally unstable, it turns out that it is possible to find (unstable) periodic orbits around these points, at least in the restricted three-body problem. These periodic orbits, referred to as "halo" orbits, do not exist in a full n-body dynamical system such as the Solar System. However, quasi-periodic (i.e. bounded but not precisely repeating) orbits following Lissajous-curve trajectories do exist in the n-body system. These quasi-periodic Lissajous orbits are what most of Lagrangian-point missions to date have used. Although they are not perfectly stable, a relatively modest effort at station keeping can allow a spacecraft to stay in a desired Lissajous orbit for an extended period of time. It also turns out that, at least in the case of Sun–Earth-Template:L1 missions, it is actually preferable to place the spacecraft in a large-amplitude (Template:Convert) Lissajous orbit, instead of having it sit at the Lagrangian point, because this keeps the spacecraft off the direct line between Sun and Earth, thereby reducing the impact of solar interference on Earth–spacecraft communications. Similarly, a large-amplitude Lissajous orbit around L2 can keep a probe out of Earth's shadow and therefore ensures a better illumination of its solar panels. Another interesting and useful property of the collinear Lagrangian points and their associated Lissajous orbits is that they serve as "gateways" to control the chaotic trajectories of the Interplanetary Transport Network.

Earth–Moon Template:L1 allows comparatively easy access to Lunar and Earth orbits with minimal change in velocity and has this as an advantage to position a half-way manned space station intended to help transport cargo and personnel to the Moon and back.

Earth–Moon Template:L2 would be a good location for a communications satellite covering the Moon's far side and would be "an ideal location" for a propellant depot as part of the proposed depot-based space transportation architecture.[12] 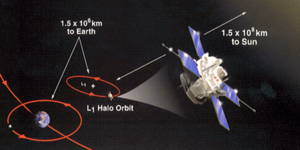 The satellite ACE in an orbit around L1

Sun–Earth Template:L1 is suited for making observations of the Sun–Earth system. Objects here are never shadowed by Earth or the Moon. The first mission of this type was the International Sun Earth Explorer 3 (ISEE-3) mission used as an interplanetary early warning storm monitor for solar disturbances.

Sun–Earth Template:L2 is a good spot for space-based observatories. Because an object around Template:L2 will maintain the same relative position with respect to the Sun and Earth, shielding and calibration are much simpler. It is, however, slightly beyond the reach of Earth's umbra,[13] so solar radiation is not completely blocked. From this point, the Sun, Earth and Moon are relatively closely positioned together in the sky, and hence leave a large field of view without interference – this is especially helpful for infrared astronomy.

Sun–Earth Template:L3 was a popular place to put a "Counter-Earth" in pulp science fiction and comic books. Once space-based observation became possible via satellites[14] and probes, it was shown to hold no such object. The Sun–Earth Template:L3 is unstable and could not contain an object, large or small, for very long. This is because the gravitational forces of the other planets are stronger than that of Earth (Venus, for example, comes within 0.3 AU of this Template:L3 every 20 months).

Scientists at the B612 Foundation are planning to use Venus's L3 point to position their planned Sentinel telescope, which aims to look back towards Earth's orbit and compile a catalogue of near-Earth asteroids.[16]

Missions to Lagrangian points generally orbit the points rather than occupy them directly.

International Sun Earth Explorer 3 (ISEE-3) began its mission at the Sun–Earth L1 before leaving to intercept a comet in 1982. The Sun–Earth L1 is also the point to which the Reboot ISEE-3 mission was attempting to return the craft as the first phase of a recovery mission (as of September 25, 2014 all efforts have failed and contact was lost).[17]

Solar and Heliospheric Observatory (SOHO) is stationed in a halo orbit at Template:L1, and the Advanced Composition Explorer (ACE) in a Lissajous orbit, also at the Template:L1 point. WIND is also at Template:L1.

Spacecraft at the Sun–Earth L2 point are in a Lissajous orbit until decommissioned, when they are sent into a heliocentric graveyard orbit.

Past and present missions

The Aditya mission for a solar observatory, is officially scheduled for launch in 2016–17 by ISRO. "It will be going to a point 1.5 million kilometers away from Earth, that is L1 Lagrangian point. From this point it will observe the sun constantly and study the solar corona, the region around the sun's surface.[48]