In mathematics, the Laguerre polynomials, named after Edmond Laguerre (1834 - 1886), are solutions of Laguerre's equation:

which is a second-order linear differential equation. This equation has nonsingular solutions only if n is a non-negative integer.

The associated Laguerre polynomials (alternatively, but rarely, named Sonin polynomials, after their inventor[1] Nikolay Yakovlevich Sonin) are solutions of

These polynomials, usually denoted L0, L1, ..., are a polynomial sequence which may be defined by the Rodrigues formula,

reducing to the closed form of a following section.

They are orthogonal polynomials with respect to an inner product

The sequence of Laguerre polynomials n! Ln is a Sheffer sequence,

The Rook polynomials in combinatorics are more or less the same as Laguerre polynomials, up to elementary changes of variables. Further see the Tricomi–Carlitz polynomials.

These are the first few Laguerre polynomials: 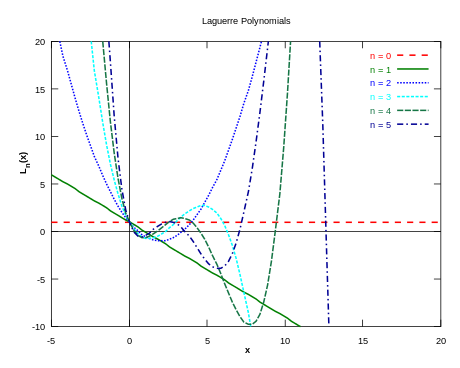 One can also define the Laguerre polynomials recursively, defining the first two polynomials as

and then using the following recurrence relation for any k ≥ 1:

The closed form is

The generating function for them likewise follows,

One can also define the generalized Laguerre polynomials recursively, defining the first two polynomials as

and then using the following recurrence relation for any k ≥ 1:

The simple Laguerre polynomials are included in the associated polynomials, through α = 0,

The Rodrigues formula for them is

The generating function for them is

Explicit examples and properties of the associated Laguerre polynomials

When Template:Mvar is an integer the function reduces to a polynomial of degree Template:Mvar. It has the alternative expression[4]

in terms of Kummer's function of the second kind.

derived by applying Leibniz's theorem for differentiation of a product to Rodrigues' formula.

is the Bessel function.

As a contour integral

Given the generating function specified above, the polynomials may be expressed in terms of a contour integral

where the contour circles the origin once in a counterclockwise direction.

The addition formula for Laguerre polynomials:[8]

They can be used to derive the four 3-point-rules

combined they give this additional, useful recurrence relations

A somewhat curious identity, valid for integer i and Template:Mvar, is

it may be used to derive the partial fraction decomposition

This points to a special case (α = 0) of the formula above: for integer α = k the generalized polynomial may be written

the shift by k sometimes causing confusion with the usual parenthesis notation for a derivative.

which generalizes with Cauchy's formula to

The derivative with respect to the second variable Template:Mvar has the form,[9]

This is evident from the contour integral representation below.

which may be compared with the equation obeyed by the kth derivative of the ordinary Laguerre polynomial,

for this equation only.

In Sturm–Liouville form the differential equation is

which shows that LTemplate:Su is an eigenvector for the eigenvalue Template:Mvar.

The associated Laguerre polynomials are orthogonal over [0, ∞) with respect to the measure with weighting function xα e−x:[10]

Turán's inequalities can be derived here, which is

The following integral is needed in the quantum mechanical treatment of the hydrogen atom,

Let a function have the (formal) series expansion

The series converges in the associated Hilbert space L2[0, ∞) if and only if

Monomials are represented as

while binomials have the parametrization

This leads directly to

for the exponential function. The incomplete gamma function has the representation

where the Hn(x) are the Hermite polynomials based on the weighting function exp(−x2), the so-called "physicist's version."

Because of this, the generalized Laguerre polynomials arise in the treatment of the quantum harmonic oscillator.

is the Pochhammer symbol (which in this case represents the rising factorial).