The Laplace transform is named after mathematician and astronomer Pierre-Simon Laplace, who used a similar transform (now called z transform) in his work on probability theory. The current widespread use of the transform came about soon after World War II although it had been used in the 19th century by Abel, Lerch, Heaviside, and Bromwich.

From 1744, Leonhard Euler investigated integrals of the form

as solutions of differential equations but did not pursue the matter very far.[2] Joseph Louis Lagrange was an admirer of Euler and, in his work on integrating probability density functions, investigated expressions of the form

which some modern historians have interpreted within modern Laplace transform theory.[3][4]Template:Clarify

These types of integrals seem first to have attracted Laplace's attention in 1782 where he was following in the spirit of Euler in using the integrals themselves as solutions of equations.[5] However, in 1785, Laplace took the critical step forward when, rather than just looking for a solution in the form of an integral, he started to apply the transforms in the sense that was later to become popular. He used an integral of the form:

akin to a Mellin transform, to transform the whole of a difference equation, in order to look for solutions of the transformed equation. He then went on to apply the Laplace transform in the same way and started to derive some of its properties, beginning to appreciate its potential power.[6]

Laplace also recognised that Joseph Fourier's method of Fourier series for solving the diffusion equation could only apply to a limited region of space as the solutions were periodic. In 1809, Laplace applied his transform to find solutions that diffused indefinitely in space.[7]

The Laplace transform of a function f(t), defined for all real numbers t ≥ 0, is the function F(s), defined by:

The parameter s is the complex number frequency:

with real numbers σ and ω.

Other notations for the Laplace transform include

An important special case is where μ is a probability measure or, even more specifically, the Dirac delta function. In operational calculus, the Laplace transform of a measure is often treated as though the measure came from a distribution function f. In that case, to avoid potential confusion, one often writes

where the lower limit of 0− is shorthand notation for

This limit emphasizes that any point mass located at 0 is entirely captured by the Laplace transform. Although with the Lebesgue integral, it is not necessary to take such a limit, it does appear more naturally in connection with the Laplace–Stieltjes transform.

By abuse of language, this is referred to as the Laplace transform of the random variable X itself. Replacing s by −t gives the moment generating function of X. The Laplace transform has applications throughout probability theory, including first passage times of stochastic processes such as Markov chains, and renewal theory.

The bilateral Laplace transform is defined as follows:

In these cases, the image of the Laplace transform lives in a space of analytic functions in the region of convergence. The inverse Laplace transform is given by the following complex integral, which is known by various names (the Bromwich integral, the Fourier-Mellin integral, and Mellin's inverse formula):

where γ is a real number so that the contour path of integration is in the region of convergence of F(s). An alternative formula for the inverse Laplace transform is given by Post's inversion formula. The limit here is interpreted in the weak-* topology.

In practice it is typically more convenient to decompose a Laplace transform into known transforms of functions obtained from a table, and construct the inverse by inspection.

If f is a locally integrable function (or more generally a Borel measure locally of bounded variation), then the Laplace transform F(s) of f converges provided that the limit

exists. The Laplace transform converges absolutely if the integral

exists (as a proper Lebesgue integral). The Laplace transform is usually understood as conditionally convergent, meaning that it converges in the former instead of the latter sense.

That is, in the region of convergence F(s) can effectively be expressed as the absolutely convergent Laplace transform of some other function. In particular, it is analytic.

There are several Paley–Wiener theorems concerning the relationship between the decay properties of f and the properties of the Laplace transform within the region of convergence.

The Laplace transform has a number of properties that make it useful for analyzing linear dynamical systems. The most significant advantage is that differentiation and integration become multiplication and division, respectively, by s (similarly to logarithms changing multiplication of numbers to addition of their logarithms). Because of this property, the Laplace variable s is also known as operator variable in the L domain: either derivative operator or (for s−1) integration operator. The transform turns integral equations and differential equations to polynomial equations, which are much easier to solve. Once solved, use of the inverse Laplace transform reverts to the time domain.

Given the functions f(t) and g(t), and their respective Laplace transforms F(s) and G(s):

the following table is a list of properties of unilateral Laplace transform:[12]

, if all poles of sF(s) are in the left half-plane.
The final value theorem is useful because it gives the long-term behaviour without having to perform partial fraction decompositions or other difficult algebra. If

has poles in the right-hand plane or on the imaginary axis, (e.g., if

) the behaviour of this formula is undefined.

The Laplace transform can be viewed as a continuous analogue of a power series. If a(n) is a discrete function of a positive integer n, then the power series associated to a(n) is the series

where x is a real variable (see Z transform). Replacing summation over n with integration over t, a continuous version of the power series becomes

where the discrete function a(n) is replaced by the continuous one f(t). (See Mellin transform below.) Changing the base of the power from x to e gives

For this to converge for, say, all bounded functions f, it is necessary to require that

are the moments of the function f. If the first n moments of f converge absolutely, then by repeated differentiation under the integral,

. This is of special significance in probability theory, where the moments of a random variable X are given by the expectation values

. Then the relation holds:

Proof of the Laplace transform of a function's derivative

and in the bilateral case,

where f(n) denotes the nth derivative of f, can then be established with an inductive argument.

, then (see the table above)

Letting s → 0, gives one the identity

The validity of this identity can be proved by other means. It is an example of a Frullani integral.

Another example is Dirichlet integral.

Relationship to other transforms

The (unilateral) Laplace–Stieltjes transform of a function g : R → R is defined by the Lebesgue–Stieltjes integral

The function g is assumed to be of bounded variation. If g is the antiderivative of f:

The continuous Fourier transform is equivalent to evaluating the bilateral Laplace transform with imaginary argument s = iω or s = 2πfi:[15]

However, a relation of the form

holds under much weaker conditions. For instance, this holds for the above example provided that the limit is understood as a weak limit of measures (see vague topology). General conditions relating the limit of the Laplace transform of a function on the boundary to the Fourier transform take the form of Paley-Wiener theorems.

we set θ = e−t we get a two-sided Laplace transform.

be a sampling impulse train (also called a Dirac comb) and

be the sampled representation of the continuous-time x(t)

The Laplace transform of the sampled signal

with the substitution of z → esT.

Comparing the last two equations, we find the relationship between the unilateral Z-transform and the Laplace transform of the sampled signal:

The similarity between the Z and Laplace transforms is expanded upon in the theory of time scale calculus.

The integral form of the Borel transform

is a special case of the Laplace transform for f an entire function of exponential type, meaning that

for some constants A and B. The generalized Borel transform allows a different weighting function to be used, rather than the exponential function, to transform functions not of exponential type. Nachbin's theorem gives necessary and sufficient conditions for the Borel transform to be well defined.

The following table provides Laplace transforms for many common functions of a single variable.[16][17] For definitions and explanations, see the Explanatory Notes at the end of the table.

Because the Laplace transform is a linear operator:

Using this linearity, and various trigonometric, hyperbolic, and complex number (etc.) properties and/or identities, some Laplace transforms can be obtained from others quicker than by using the definition directly.

The unilateral Laplace transform takes as input a function whose time domain is the non-negative reals, which is why all of the time domain functions in the table below are multiples of the Heaviside step function, u(t). The entries of the table that involve a time delay τ are required to be causal (meaning that τ > 0). A causal system is a system where the impulse response h(t) is zero for all time t prior to t = 0. In general, the region of convergence for causal systems is not the same as that of anticausal systems.

Here is a summary of equivalents: 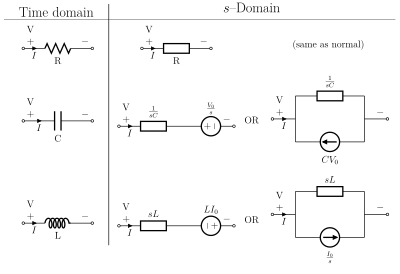 The equivalents for current and voltage sources are simply derived from the transformations in the table above.

Examples: How to apply the properties and theorems

The Laplace transform is used frequently in engineering and physics; the output of a linear time invariant system can be calculated by convolving its unit impulse response with the input signal. Performing this calculation in Laplace space turns the convolution into a multiplication; the latter being easier to solve because of its algebraic form. For more information, see control theory.

In nuclear physics, the following fundamental relationship governs radioactive decay: the number of radioactive atoms N in a sample of a radioactive isotope decays at a rate proportional to N. This leads to the first order linear differential equation

where λ is the decay constant. The Laplace transform can be used to solve this equation.

Rearranging the equation to one side, we have

Next, we take the Laplace transform of both sides of the equation:

Finally, we take the inverse Laplace transform to find the general solution

which is indeed the correct form for radioactive decay.

Example 2: Deriving the complex impedance for a capacitor

In the theory of electrical circuits, the current flow in a capacitor is proportional to the capacitance and rate of change in the electrical potential (in SI units). Symbolically, this is expressed by the differential equation

Taking the Laplace transform of this equation, we obtain