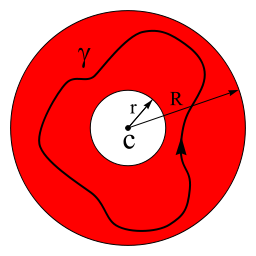 In mathematics, the Laurent series of a complex function f(z) is a representation of that function as a power series which includes terms of negative degree. It may be used to express complex functions in cases where a Taylor series expansion cannot be applied. The Laurent series was named after and first published by Pierre Alphonse Laurent in 1843. Karl Weierstrass may have discovered it first but his paper, written in 1841, was not published until much later, after Weierstrass' death.[1]

The Laurent series for a complex function f(z) about a point c is given by:

where the an are constants, defined by a line integral which is a generalization of Cauchy's integral formula:

The path of integration

is counterclockwise around a closed, rectifiable path containing no self-intersections, enclosing c and lying in an annulus A in which

is holomorphic (analytic). The expansion for

will then be valid anywhere inside the annulus. The annulus is shown in red in the diagram on the right, along with an example of a suitable path of integration labeled

to be a circle

, this just amounts to computing the complex Fourier coefficients of the restriction of

. The fact that these integrals are unchanged by a deformation of the contour

is an immediate consequence of Stokes' theorem.

In practice, the above integral formula may not offer the most practical method for computing the coefficients

for a given function

; instead, one often pieces together the Laurent series by combining known Taylor expansions. Because the Laurent expansion of a function is unique whenever it exists, any expression of this form that actually equals the given function

in some annulus must actually be the Laurent expansion of

Laurent series with complex coefficients are an important tool in complex analysis, especially to investigate the behavior of functions near singularities. 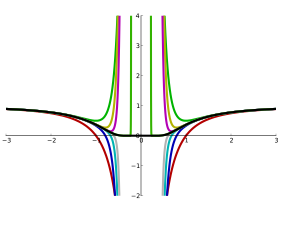 e−1/x2 and Laurent approximations: see text for key. As the negative degree of the Laurent series rises, it approaches the correct function.

e−1/x2 and its Laurent approximations with the negative degree rising. The neighborhood around the zero singularity can never be approximated.

Consider for instance the function

. As a real function, it is infinitely differentiable everywhere; as a complex function however it is not differentiable at x = 0. By replacing x by −1/x2 in the power series for the exponential function, we obtain its Laurent series which converges and is equal to ƒ(x) for all complex numbers x except at the singularity x = 0. The graph opposite shows e−1/x2 in black and its Laurent approximations

is a given Laurent series with complex coefficients an and a complex center c. Then there exists a unique inner radius r and outer radius R such that:

It is possible that r may be zero or R may be infinite; at the other extreme, it's not necessarily true that r is less than R. These radii can be computed as follows:

We take R to be infinite when this latter lim sup is zero.

Conversely, if we start with an annulus of the form A = {z : r < |z − c| < R} and a holomorphic function ƒ(z) defined on A, then there always exists a unique Laurent series with center c which converges (at least) on A and represents the function ƒ(z).

As an example, let

This function has singularities at z = 1 and z = 2i, where the denominator of the expression is zero and the expression is therefore undefined. A Taylor series about z = 0 (which yields a power series) will only converge in a disc of radius 1, since it "hits" the singularity at 1.

However, there are three possible Laurent expansions about 0, depending on the region z is in:

(The technique involves using partial fractions to split the original expression for f(z) into two simpler fractions and then exploiting the fact that 1/(1-z) is the formula for the sum of a geometric series with first term 1 and constant multiplier z.)

(The terms above can be derived through polynomial long division or using the sum of a geometric series trick again, this time using

as the common ratios.)

The case r = 0, i.e. a holomorphic function ƒ(z) which may be undefined at a single point c, is especially important.
The coefficient a−1 of the Laurent expansion of such a function is called the residue of ƒ(z) at the singularity c; it plays a prominent role in the residue theorem.

For an example of this, consider

This function is holomorphic everywhere except at z = 0. To determine the Laurent expansion about c = 0, we use our knowledge of the Taylor series of the exponential function:

and we find that the residue is 2.

Multiply both sides with

, where k is an arbitrary integer, and integrate on a path γ inside the annulus,

The series converges uniformly on

, where ε is a positive number small enough for γ to be contained in the constricted closed annulus, so the integration and summation can be interchanged. Substituting the identity

into the summation yields

Hence the Laurent series is unique.

The principal part of a Laurent series is the series of terms with negative degree, that is

If the principal part of f is a finite sum, then f has a pole at c of order equal to (negative) the degree of the highest term; on the other hand, if f has an essential singularity at c, the principal part is an infinite sum (meaning it has infinitely many non-zero terms).

If the inner radius of convergence of the Laurent series for f is 0, then this is if and only if: f has an essential singularity at c if and only if the principal part is an infinite sum, and has a pole otherwise.

If the inner radius of convergence is positive, f may have infinitely many negative terms but still be regular at c, as in the example above, in which case it is represented by a different Laurent series in a disk about c.

, and can be analyzed similarly—while Laurent series with infinitely many negative terms have complicated behavior on the inner circle of convergence.

Laurent series cannot in general be multiplied. Algebraically, the expression for the terms of the product may involve infinite sums which need not converge (one cannot take the convolution of integer sequences). Geometrically, the two Laurent series may have non-overlapping annuli of convergence.

Two Laurent series with only finitely many negative terms can be multiplied: algebraically, the sums are all finite; geometrically, these have poles at c, and inner radius of convergence 0, so they both converge on an overlapping annulus.