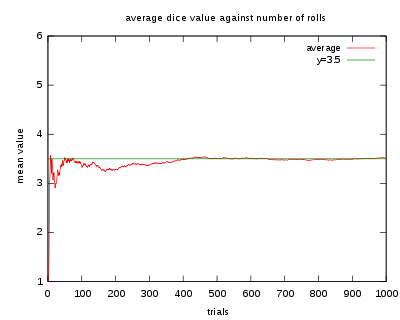 An illustration of the law of large numbers using a particular run of rolls of a single die. As the number of rolls in this run increases, the average of the values of all the results approaches 3.5. While different runs would show a different shape over a small number of throws (at the left), over a large number of rolls (to the right) they would be extremely similar.

Template:Probability fundamentals In probability theory, the law of large numbers (LLN) is a theorem that describes the result of performing the same experiment a large number of times. According to the law, the average of the results obtained from a large number of trials should be close to the expected value, and will tend to become closer as more trials are performed.

The LLN is important because it "guarantees" stable long-term results for the averages of some random events. For example, while a casino may lose money in a single spin of the roulette wheel, its earnings will tend towards a predictable percentage over a large number of spins. Any winning streak by a player will eventually be overcome by the parameters of the game. It is important to remember that the LLN only applies (as the name indicates) when a large number of observations are considered. There is no principle that a small number of observations will coincide with the expected value or that a streak of one value will immediately be "balanced" by the others (see the gambler's fallacy).

For example, a single roll of a fair six-sided die produces one of the numbers 1, 2, 3, 4, 5, or 6, each with equal probability. Therefore, the expected value of a single die roll is

According to the law of large numbers, if a large number of six-sided dice are rolled, the average of their values (sometimes called the sample mean) is likely to be close to 3.5, with the precision increasing as more dice are rolled.

For example, a fair coin toss is a Bernoulli trial. When a fair coin is flipped once, the theoretical probability that the outcome will be heads is equal to 1/2. Therefore, according to the law of large numbers, the proportion of heads in a "large" number of coin flips "should be" roughly 1/2. In particular, the proportion of heads after n flips will almost surely converge to 1/2 as n approaches infinity.

Diffusion is an example of the law of large numbers, applied to chemistry. Initially, there are solute molecules on the left side of a barrier (purple line) and none on the right. The barrier is removed, and the solute diffuses to fill the whole container.
Top: With a single molecule, the motion appears to be quite random.
Middle: With more molecules, there is clearly a trend where the solute fills the container more and more uniformly, but there are also random fluctuations.
Bottom: With an enormous number of solute molecules (too many to see), the randomness is essentially gone: The solute appears to move smoothly and systematically from high-concentration areas to low-concentration areas. In realistic situations, chemists can describe diffusion as a deterministic macroscopic phenomenon (see Fick's laws), despite its underlying random nature.

The Italian mathematician Gerolamo Cardano (1501–1576) stated without proof that the accuracies of empirical statistics tend to improve with the number of trials.[1] This was then formalized as a law of large numbers. A special form of the LLN (for a binary random variable) was first proved by Jacob Bernoulli.[2] It took him over 20 years to develop a sufficiently rigorous mathematical proof which was published in his Ars Conjectandi (The Art of Conjecturing) in 1713. He named this his "Golden Theorem" but it became generally known as "Bernoulli's Theorem". This should not be confused with the principle in physics with the same name, named after Jacob Bernoulli's nephew Daniel Bernoulli. In 1837, S.D. Poisson further described it under the name "la loi des grands nombres" ("The law of large numbers").[3][4] Thereafter, it was known under both names, but the "Law of large numbers" is most frequently used.

After Bernoulli and Poisson published their efforts, other mathematicians also contributed to refinement of the law, including Chebyshev,[5] Markov, Borel, Cantelli and Kolmogorov and Khinchin, who finally provided a complete proof of the LLN for arbitrary random variables. These further studies have given rise to two prominent forms of the LLN. One is called the "weak" law and the other the "strong" law, in reference to two different modes of convergence of the cumulative sample means to the expected value; in particular, as explained below, the strong form implies the weak.

converges to the expected value

An assumption of finite variance Var(X1) = Var(X2) = ... = σ2 < ∞ is not necessary. Large or infinite variance will make the convergence slower, but the LLN holds anyway. This assumption is often used because it makes the proofs easier and shorter.

The difference between the strong and the weak version is concerned with the mode of convergence being asserted. For interpretation of these modes, see Convergence of random variables.

Simulation illustrating the law of large numbers. Each frame, you flip a coin that is red on one side and blue on the other, and put a dot in the corresponding column. A pie chart shows the proportion of red and blue so far. Notice that the proportion varies a lot at first, but gradually approaches 50%.

That is to say that for any positive number ε,

Interpreting this result, the weak law essentially states that for any nonzero margin specified, no matter how small, with a sufficiently large sample there will be a very high probability that the average of the observations will be close to the expected value; that is, within the margin.

The proof is more complex than that of the weak law.[8] This law justifies the intuitive interpretation of the expected value (for Lebesgue integration only ) of a random variable when sampled repeatedly as the "long-term average".

The strong law of large numbers can itself be seen as a special case of the pointwise ergodic theorem.

Moreover, if the summands are independent but not identically distributed, then

provided that each Xk has a finite second moment and

Differences between the weak law and the strong law

The weak law states that for a specified large n, the average

is likely to be near μ. Thus, it leaves open the possibility that

happens an infinite number of times, although at infrequent intervals.

The strong law shows that this almost surely will not occur. In particular, it implies that with probability 1, we have that for any ε > 0 the inequality

holds for all large enough n.[9]

1. Let x be exponentially distributed random variable with parameter 1, the transformation with the following expected value:

2. Let x be geometric distribution with probability 0.5, the transformation with the following expected value:

Suppose f(x,θ) is some function defined for θ ∈ Θ, and continuous in θ. Then for any fixed θ, the sequence {f(X1,θ), f(X2,θ), …} will be a sequence of independent and identically distributed random variables, such that the sample mean of this sequence converges in probability to E[f(X,θ)]. This is the pointwise (in θ) convergence.

The uniform law of large numbers states the conditions under which the convergence happens uniformly in θ. If[15][16]

Borel's law of large numbers, named after Émile Borel, states that if an experiment is repeated a large number of times, independently under identical conditions, then the proportion of times that any specified event occurs approximately equals the probability of the event's occurrence on any particular trial; the larger the number of repetitions, the better the approximation tends to be. More precisely, if E denotes the event in question, p its probability of occurrence, and Nn(E) the number of times E occurs in the first n trials, then with probability one,[17]

This theorem makes rigorous the intuitive notion of probability as the long-run relative frequency of an event's occurrence. It is a special case of any of several more general laws of large numbers in probability theory.

This proof uses the assumption of finite variance

). The independence of the random variables implies no correlation between them, and we have that

The common mean μ of the sequence is the mean of the sample average:

This may be used to obtain the following:

As n approaches infinity, the expression approaches 1. And by definition of convergence in probability, we have obtained

By Taylor's theorem for complex functions, the characteristic function of any random variable, X, with finite mean μ, can be written as

All X1, X2, ... have the same characteristic function, so we will simply denote this φX.

Among the basic properties of characteristic functions there are

if X and Y are independent.

These rules can be used to calculate the characteristic function of

The limit  eitμ  is the characteristic function of the constant random variable μ, and hence by the Lévy continuity theorem,

converges in distribution to μ:

μ is a constant, which implies that convergence in distribution to μ and convergence in probability to μ are equivalent (see Convergence of random variables.) Therefore,

This shows that the sample mean converges in probability to the derivative of the characteristic function at the origin, as long as the latter exists.