Least mean squares (LMS) algorithms are a class of adaptive filter used to mimic a desired filter by finding the filter coefficients that relate to producing the least mean squares of the error signal (difference between the desired and the actual signal). It is a stochastic gradient descent method in that the filter is only adapted based on the error at the current time. It was invented in 1960 by Stanford University professor Bernard Widrow and his first Ph.D. student, Ted Hoff. 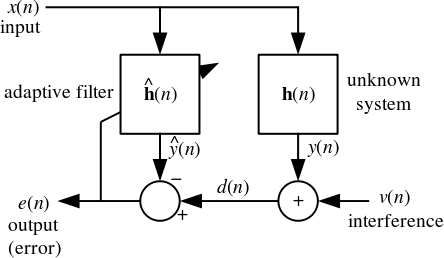 The realization of the causal Wiener filter looks a lot like the solution to the least squares estimate, except in the signal processing domain. The least squares solution, for input matrix

The FIR least mean squares filter is related to the Wiener filter, but minimizing the error criterion of the former does not rely on cross-correlations or auto-correlations. Its solution converges to the Wiener filter solution. Most linear adaptive filtering problems can be formulated using the block diagram above. That is, an unknown system

to make it as close as possible to

, while using only observable signals

are not directly observable. Its solution is closely related to the Wiener filter.

is the number of the current input sample

is the filter order

estimated filter; interpret as the estimation of the filter coefficients after n samples

, by updating the filter weights in a manner to converge to the optimum filter weight. The algorithm starts by assuming a small weights (zero in most cases), and at each step, by finding the gradient of the mean square error, the weights are updated. That is, if the MSE-gradient is positive, it implies, the error would keep increasing positively, if the same weight is used for further iterations, which means we need to reduce the weights. In the same way, if the gradient is negative, we need to increase the weights. So, the basic weight update equation is :

represents the mean-square error. The negative sign indicates that, we need to change the weights in a direction opposite to that of the gradient slope.

is the error at the current sample n and

) is the mean square error, and it is minimized by the LMS. This is where the LMS gets its name. Applying steepest descent means to take the partial derivatives with respect to the individual entries of the filter coefficient (weight) vector

is the gradient operator

is the step size(adaptation constant). That means we have found a sequential update algorithm which minimizes the cost function. Unfortunately, this algorithm is not realizable until we know

Generally, the expectation above is not computed. Instead, to run the LMS in an online (updating after each new sample is received) environment, we use an instantaneous estimate of that expectation. See below.

For most systems the expectation function

must be approximated. This can be done with the following unbiased estimator

indicates the number of samples we use for that estimate. The simplest case is

For that simple case the update algorithm follows as

Indeed this constitutes the update algorithm for the LMS filter.

The LMS algorithm for a

th order algorithm can be summarized as

Convergence and stability in the mean

is not chosen properly.

is chosen to be large, the amount with which the weights change depends heavily on the gradient estimate, and so the weights may change by a large value so that gradient which was negative at the first instant may now become positive. And at the second instant, the weight may change in the opposite direction by a large amount because of the negative gradient and would thus keep oscillating with a large variance about the optimal weights. On the other hand if

is chosen to be too small, time to converge to the optimal weights will be too large.

Thus, an upper bound on

is needed which is given as

is the greatest eigenvalue of the autocorrelation matrix

. If this condition is not fulfilled, the algorithm becomes unstable and

Maximum convergence speed is achieved when

is the smallest eigenvalue of R. Given that

is less than or equal to this optimum, the convergence speed is determined by

, that is, the maximum achievable convergence speed depends on the eigenvalue spread of

is the variance of the signal. In this case all eigenvalues are equal, and the eigenvalue spread is the minimum over all possible matrices. The common interpretation of this result is therefore that the LMS converges quickly for white input signals, and slowly for colored input signals, such as processes with low-pass or high-pass characteristics.

It is important to note that the above upperbound on

only enforces stability in the mean, but the coefficients of

can still grow infinitely large, i.e. divergence of the coefficients is still possible. A more practical bound is

denotes the trace of

. This bound guarantees that the coefficients of

do not diverge (in practice, the value of

should not be chosen close to this upper bound, since it is somewhat optimistic due to approximations and assumptions made in the derivation of the bound).

. This makes it very hard (if not impossible) to choose a learning rate

that guarantees stability of the algorithm (Haykin 2002). The Normalised least mean squares filter (NLMS) is a variant of the LMS algorithm that solves this problem by normalising with the power of the input. The NLMS algorithm can be summarised as:

It can be shown that if there is no interference (

), then the optimal learning rate for the NLMS algorithm is

and is independent of the input

and the real (unknown) impulse response

. In the general case with interference (

), the optimal learning rate is

The results above assume that the signals

are uncorrelated to each other, which is generally the case in practice.

Let the filter misalignment be defined as

, we can derive the expected misalignment for the next sample as:

Assuming independence, we have:

The optimal learning rate is found at