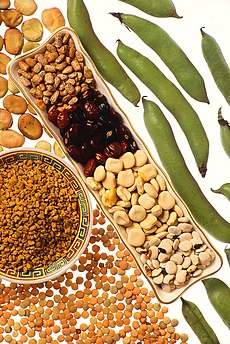 A selection of various legumes

A legume (Template:IPAc-en or Template:IPAc-en) is a plant in the family Fabaceae (or Leguminosae), or the fruit or seed of such a plant. Legumes are grown agriculturally, primarily for their food grain seed (e.g., beans and lentils, or generally pulse), for livestock forage and silage, and as soil-enhancing green manure. Legumes are notable in that most of them have symbiotic nitrogen-fixing bacteria in structures called root nodules. Well-known legumes include alfalfa, clover, peas, beans, lentils, lupins, mesquite, carob, soybeans, peanuts, tamarind, and the woody climbing vine wisteria. Legume trees like the Locust trees (Gleditsia, Robinia) or the Kentucky coffeetree (Gymnocladus dioicus) can be used in permaculture food forests.[1]

A legume fruit is a simple dry fruit that develops from a simple carpel and usually dehisces (opens along a seam) on two sides. A common name for this type of fruit is a pod, although the term "pod" is also applied to a few other fruit types, such as that of vanilla (a capsule) and of radish (a silique).

Many legumes (alfalfa, clover, peas, beans, lentils, soybeans, peanuts and others) contain symbiotic bacteria called Rhizobia within root nodules of their root systems. (Plants belonging to the genus Styphnolobium are one exception to this rule.) These bacteria have the special ability of fixing nitrogen from atmospheric, molecular nitrogen (N2) into ammonia (NH3).[2] The chemical reaction is:

Ammonia is then converted to another form, ammonium (NH4+), usable by (some) plants by the following reaction:

This arrangement means that the root nodules are sources of nitrogen for legumes, making them relatively rich in plant proteins. All proteins contain nitrogenous amino acids. Nitrogen is therefore a necessary ingredient in the production of proteins. Hence, legumes are among the best sources of plant protein.

When a legume plant dies in the field, for example following the harvest, all of its remaining nitrogen, incorporated into amino acids inside the remaining plant parts, is released back into the soil. In the soil, the amino acids are converted to nitrate (NO3-), making the nitrogen available to other plants, thereby serving as fertilizer for future crops.[3][4]

In many traditional and organic farming practices, crop rotation involving legumes is common. By alternating between legumes and nonlegumes, sometimes planting nonlegumes two times in a row and then a legume, the field usually receives a sufficient amount of nitrogenous compounds to produce a good result, even when the crop is nonleguminous. Legumes are sometimes referred to as "green manure".

Farmed legumes can belong to many agricultural classes, including forage, grain, blooms, pharmaceutical/industrial, fallow/green manure, and timber species. Most commercially farmed species fill two or more roles simultaneously, depending upon their degree of maturity when harvested.

Forage legumes are of two broad types. Some, like alfalfa, clover, vetch (Vicia), stylo (Stylosanthes), or Arachis, are sown in pasture and grazed by livestock. Other forage legumes such as Leucaena or Albizia are woody shrub or tree species that are either broken down by livestock or regularly cut by humans to provide livestock feed.

Grain legumes are cultivated for their seeds, and are also called pulses. The seeds are used for human and animal consumption or for the production of oils for industrial uses. Grain legumes include beans, lentils, lupins, peas, and peanuts.[5]

Legumes are among the best protein sources in the plant kingdom. Since legumes are relatively cheap compared to meat, eating more legumes may be an alternative to meat for some.

Vegetarian cooks often serve legumes along with grains, which are low in the essential amino acid lysine, creating a more complete protein than either the beans or the grains on their own. Common examples of such combinations are the Indian Dal and rice, Mexican beans with corn tortillas, and the Middle Eastern Hummus (Chickpea spread commonly served with Pita bread) and Mujaddara (A dish consisting mainly of rice and lentils).[6]

This list is not a definitive list of legumes. There are also legumes of similar names differing in either culture they come from with similar qualities to the others. This list also may also contain Heirloom seeds. The list also contains variation in prep of the seed, example being like Tofu and Tofu Mayonnaise.