In mathematics, a level set of a real-valued function of n real variables f is a set of the form

that is, a set where the function takes on a given constant value c.

A level set is a special case of a fiber. 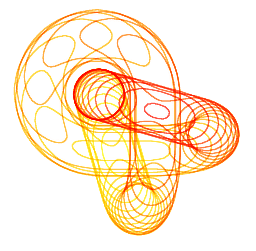 Intersections of a co-ordinate function's level surfaces with a trefoil knot. Red curves are closest to the viewer, while yellow curves are farthest.

Level sets show up in many applications, often under different names.

For example, an implicit curve is a level curve, which is considered independently of its neighbor curves, emphasizing that such a curve is defined by an implicit equation. Analogously, a level surface is sometimes called an implicit surface or an isosurface.

The name isocontour is also used, which means a contour of equal height. In various application areas, isocontours have received specific names, which indicate often the nature of the values of the considered function, such as isobar, isotherm, isogon, isochrone, isoquant and indifference curve.

For example, given a specific radius r, the equation of a circle defines an isocontour.

Level sets versus the gradient 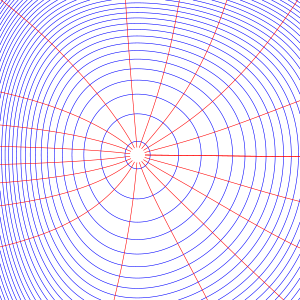 Consider a function f whose graph looks like a hill. The blue curves are then the level sets. The red curves follow the direction of the gradient. In other words, the cautious hiker follows the blue paths, while the bold one the red paths.

Theorem. If the function f is differentiable, the gradient of f at a point is either zero, or perpendicular to the level set of f at that point.

To understand what this means, imagine that two hikers are at the same location on a mountain. One of them is bold, and decides to go in the direction where the slope is steepest. The other one is more cautious; he does not want to either climb or descend, choosing a path which will keep him at the same height. In our analogy, the above theorem says that the two hikers will depart in directions perpendicular to one another.

A consequence of this theorem (and its proof) is that if f is differentiable, a level set is a hypersurface and a manifold outside the critical points of f. At a critical point, a level set may be reduced to a point (for example at a local extremum of f) or may have a singularity such as a self-intersection point or a cusp.

A set of the form

is called a sublevel set of f (or, alternatively, a lower level set or trench of f).

is called a superlevel set of f.[1][2] Sublevel sets are important in minimization theory. The boundness of some non-empty sublevel set and the lower-semicontinuity of the function implies that a function attains its minimum, by Weierstrass's theorem. The convexity of all the sublevel sets characterizes quasiconvex functions.[3]