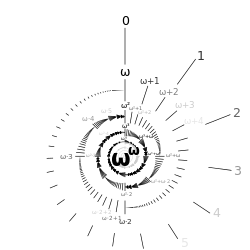 Representation of the ordinal numbers up to ωω. Each turn of the spiral represents one power of ω. Limit ordinals are those that are non-zero and have no predecessor, such as ω or ω2

Various other ways to define limit ordinal are:

Some contention exists on whether or not 0 should be classified as a limit ordinal, as it does not have an immediate predecessor; some textbooks include 0 in the class of limit ordinals[1] while others exclude it.[2]

Because the class of ordinal numbers is well-ordered, there is a smallest infinite limit ordinal; denoted by ω (omega). The ordinal ω is also the smallest infinite ordinal (disregarding limit), as it is the least upper bound of the natural numbers. Hence ω represents the order type of the natural numbers. The next limit ordinal above the first is ω + ω = ω·2, which generalizes to ω·n for any natural number n. Taking the union (the supremum operation on any set of ordinals) of all the ω·n, we get ω·ω = ω2, which generalizes to ωn for any natural number n. This process can be further iterated as follows to produce:

Beyond the countable, the first uncountable ordinal is usually denoted ω1. It is also a limit ordinal.

Continuing, one can obtain the following (all of which are now increasing in cardinality):

In general, we always get a limit ordinal when taking the union of a nonempty set of ordinals that has no maximum element.

The classes of successor ordinals and limit ordinals (of various cofinalities) as well as zero exhaust the entire class of ordinals, so these cases are often used in proofs by transfinite induction or definitions by transfinite recursion. Limit ordinals represent a sort of "turning point" in such procedures, in which one must use limiting operations such as taking the union over all preceding ordinals. In principle, one could do anything at limit ordinals, but taking the union is continuous in the order topology and this is usually desirable.

If we use the Von Neumann cardinal assignment, every infinite cardinal number is also a limit ordinal (and this is a fitting observation, as cardinal derives from the Latin cardo meaning hinge or turning point): the proof of this fact is done by simply showing that every infinite successor ordinal is equinumerous to a limit ordinal via the Hotel Infinity argument.

Cardinal numbers have their own notion of successorship and limit (everything getting upgraded to a higher level).