Linear regression was the first type of regression analysis to be studied rigorously, and to be used extensively in practical applications.{{ safesubst:#invoke:Unsubst||date=__DATE__ |$B= {{#invoke:Category handler|main}}{{#invoke:Category handler|main}}[citation needed] }} This is because models which depend linearly on their unknown parameters are easier to fit than models which are non-linearly related to their parameters and because the statistical properties of the resulting estimators are easier to determine.

Linear regression has many practical uses. Most applications fall into one of the following two broad categories: 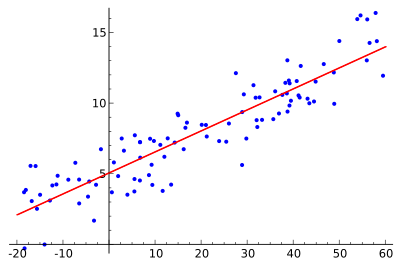 Example of simple linear regression, which has one independent variable

Given a data set

where T denotes the transpose, so that xiTβ is the inner product between vectors xi and β.

Some remarks on terminology and general use:

Example. Consider a situation where a small ball is being tossed up in the air and then we measure its heights of ascent hi at various moments in time ti. Physics tells us that, ignoring the drag, the relationship can be modeled as

where β1 determines the initial velocity of the ball, β2 is proportional to the standard gravity, and εi is due to measurement errors. Linear regression can be used to estimate the values of β1 and β2 from the measured data. This model is non-linear in the time variable, but it is linear in the parameters β1 and β2; if we take regressors xi = (xi1, xi2)  = (ti, ti2), the model takes on the standard form

Standard linear regression models with standard estimation techniques make a number of assumptions about the predictor variables, the response variables and their relationship. Numerous extensions have been developed that allow each of these assumptions to be relaxed (i.e. reduced to a weaker form), and in some cases eliminated entirely. Some methods are general enough that they can relax multiple assumptions at once, and in other cases this can be achieved by combining different extensions. Generally these extensions make the estimation procedure more complex and time-consuming, and may also require more data in order to produce an equally precise model.

The following are the major assumptions made by standard linear regression models with standard estimation techniques (e.g. ordinary least squares):

Beyond these assumptions, several other statistical properties of the data strongly influence the performance of different estimation methods: 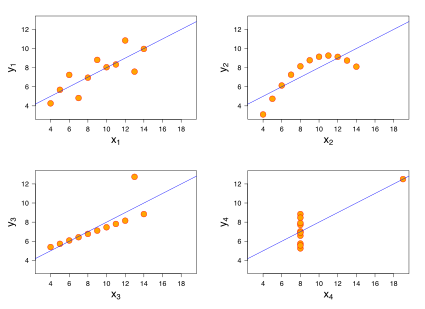 The sets in the Anscombe's quartet have the same linear regression line but are themselves very different.

A fitted linear regression model can be used to identify the relationship between a single predictor variable xj and the response variable y when all the other predictor variables in the model are "held fixed". Specifically, the interpretation of βj is the expected change in y for a one-unit change in xj when the other covariates are held fixed—that is, the expected value of the partial derivative of y with respect to xj. This is sometimes called the unique effect of xj on y. In contrast, the marginal effect of xj on y can be assessed using a correlation coefficient or simple linear regression model relating xj to y; this effect is the total derivative of y with respect to xj.

Care must be taken when interpreting regression results, as some of the regressors may not allow for marginal changes (such as dummy variables, or the intercept term), while others cannot be held fixed (recall the example from the introduction: it would be impossible to "hold ti fixed" and at the same time change the value of ti2).

It is possible that the unique effect can be nearly zero even when the marginal effect is large. This may imply that some other covariate captures all the information in xj, so that once that variable is in the model, there is no contribution of xj to the variation in y. Conversely, the unique effect of xj can be large while its marginal effect is nearly zero. This would happen if the other covariates explained a great deal of the variation of y, but they mainly explain variation in a way that is complementary to what is captured by xj. In this case, including the other variables in the model reduces the part of the variability of y that is unrelated to xj, thereby strengthening the apparent relationship with xj.

The notion of a "unique effect" is appealing when studying a complex system where multiple interrelated components influence the response variable. In some cases, it can literally be interpreted as the causal effect of an intervention that is linked to the value of a predictor variable. However, it has been argued that in many cases multiple regression analysis fails to clarify the relationships between the predictor variables and the response variable when the predictors are correlated with each other and are not assigned following a study design.[7] A commonality analysis may be helpful in disentangling the shared and unique impacts of correlated independent variables.[8]

Numerous extensions of linear regression have been developed, which allow some or all of the assumptions underlying the basic model to be relaxed.

Generalized linear models (GLMs) are a framework for modeling a response variable y that is bounded or discrete. This is used, for example:

Generalized linear models allow for an arbitrary link function g that relates the mean of the response variable to the predictors, i.e. E(y) = g(β′x). The link function is often related to the distribution of the response, and in particular it typically has the effect of transforming between the

Some common examples of GLMs are:

Single index modelsTemplate:Clarify allow some degree of nonlinearity in the relationship between x and y, while preserving the central role of the linear predictor β′x as in the classical linear regression model. Under certain conditions, simply applying OLS to data from a single-index model will consistently estimate β up to a proportionality constant.[9]

Hierarchical linear models (or multilevel regression) organizes the data into a hierarchy of regressions, for example where A is regressed on B, and B is regressed on C. It is often used where the data have a natural hierarchical structure such as in educational statistics, where students are nested in classrooms, classrooms are nested in schools, and schools are nested in some administrative grouping, such as a school district. The response variable might be a measure of student achievement such as a test score, and different covariates would be collected at the classroom, school, and school district levels.

Errors-in-variables models (or "measurement error models") extend the traditional linear regression model to allow the predictor variables X to be observed with error. This error causes standard estimators of β to become biased. Generally, the form of bias is an attenuation, meaning that the effects are biased toward zero. 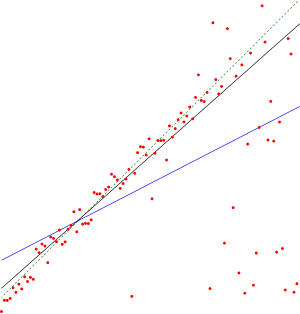 Comparison of the Theil–Sen estimator (black) and simple linear regression (blue) for a set of points with outliers.

A large number of procedures have been developed for parameter estimation and inference in linear regression. These methods differ in computational simplicity of algorithms, presence of a closed-form solution, robustness with respect to heavy-tailed distributions, and theoretical assumptions needed to validate desirable statistical properties such as consistency and asymptotic efficiency.

Some of the more common estimation techniques for linear regression are summarized below.

In statistics and numerical analysis, the problem of numerical methods for linear least squares is an important one because linear regression models are one of the most important types of model, both as formal statistical models and for exploration of data sets. The majority of statistical computer packages contain facilities for regression analysis that make use of linear least squares computations. Hence it is appropriate that considerable effort has been devoted to the task of ensuring that these computations are undertaken efficiently and with due regard to numerical precision.

Individual statistical analyses are seldom undertaken in isolation, but rather are part of a sequence of investigatory steps. Some of the topics involved in considering numerical methods for linear least squares relate to this point. Thus important topics can be

Fitting of linear models by least squares often, but not always, arises in the context of statistical analysis. It can therefore be important that considerations of computational efficiency for such problems extend to all of the auxiliary quantities required for such analyses, and are not restricted to the formal solution of the linear least squares problem.

Matrix calculations, like any others, are affected by rounding errors. An early summary of these effects, regarding the choice of computational methods for matrix inversion, was provided by Wilkinson.[18]

Linear regression is widely used in biological, behavioral and social sciences to describe possible relationships between variables. It ranks as one of the most important tools used in these disciplines.

{{#invoke:main|main}} A trend line represents a trend, the long-term movement in time series data after other components have been accounted for. It tells whether a particular data set (say GDP, oil prices or stock prices) have increased or decreased over the period of time. A trend line could simply be drawn by eye through a set of data points, but more properly their position and slope is calculated using statistical techniques like linear regression. Trend lines typically are straight lines, although some variations use higher degree polynomials depending on the degree of curvature desired in the line.

Trend lines are sometimes used in business analytics to show changes in data over time. This has the advantage of being simple. Trend lines are often used to argue that a particular action or event (such as training, or an advertising campaign) caused observed changes at a point in time. This is a simple technique, and does not require a control group, experimental design, or a sophisticated analysis technique. However, it suffers from a lack of scientific validity in cases where other potential changes can affect the data.

Early evidence relating tobacco smoking to mortality and morbidity came from observational studies employing regression analysis. In order to reduce spurious correlations when analyzing observational data, researchers usually include several variables in their regression models in addition to the variable of primary interest. For example, suppose we have a regression model in which cigarette smoking is the independent variable of interest, and the dependent variable is lifespan measured in years. Researchers might include socio-economic status as an additional independent variable, to ensure that any observed effect of smoking on lifespan is not due to some effect of education or income. However, it is never possible to include all possible confounding variables in an empirical analysis. For example, a hypothetical gene might increase mortality and also cause people to smoke more. For this reason, randomized controlled trials are often able to generate more compelling evidence of causal relationships than can be obtained using regression analyses of observational data. When controlled experiments are not feasible, variants of regression analysis such as instrumental variables regression may be used to attempt to estimate causal relationships from observational data.

Linear regression is the predominant empirical tool in economics. For example, it is used to predict consumption spending,[19] fixed investment spending, inventory investment, purchases of a country's exports,[20] spending on imports,[20] the demand to hold liquid assets,[21] labor demand,[22] and labor supply.[22]

Template:Expand section Linear regression finds application in a wide range of environmental science applications. In Canada, the Environmental Effects Monitoring Program uses statistical analyses on fish and benthic surveys to measure the effects of pulp mill or metal mine effluent on the aquatic ecosystem.[23]