Air bubbles as a man surfaces in a pool. 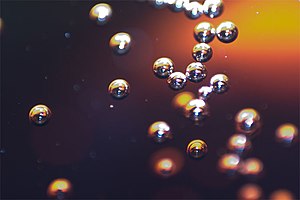 Bubbles of gas in a soft drink 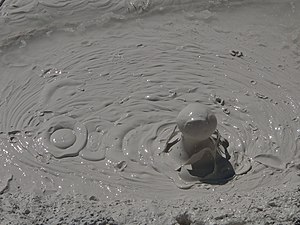 Bubble of gas in a mudpot 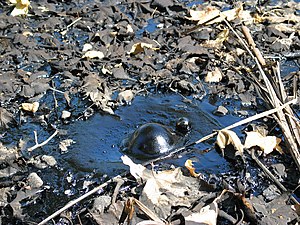 A bubble of gas in a tar pit

A bubble is a globule of one substance in another, usually gas in a liquid. Due to the Marangoni effect, bubbles may remain intact when they reach the surface of the immersive substance.

Bubbles are seen in many places in everyday life, for example:

Bubbles form, and coalesce, into globular shapes, because those shapes are at a lower energy state. For the physics and chemistry behind it, see nucleation.

Humans can see bubbles because they have a different refractive index (IR) than the surrounding substance. For example, the IR of air is approximately 1.0003 and the IR of water is approximately 1.333. Snell's Law describes how electromagnetic waves change direction at the interface between two mediums with different IR; thus bubbles can be identified from the accompanying refraction and internal reflection even though both the immersed and immersing mediums are transparent.

The above explanation only holds for bubbles of one medium submerged in another medium (e.g. bubbles of air in a soft drink); the volume of a membrane bubble (e.g. soap bubble) will not distort light very much, and one can only see a membrane bubble due to thin-film diffraction and reflection.

Nucleation can be intentionally induced, for example to create bubblegram.

In thermal inkjet printing, vapor bubbles are used as actuators. They are occasionally used in other microfluidics applications as actuators.[1]

The violent collapse of bubbles (Cavitation) near solid surfaces and the resulting impinging jet constitute the mechanism used in ultrasonic cleaning. The same effect, but on a larger scale, is used in focused energy weapons such as the bazooka and the torpedo. Pistol shrimp also use a collapsing cavitation bubble as a weapon. The same effect is used to treat kidney stones in a lithotripter. Marine mammals such as dolphins and whales use bubbles for entertainment or as hunting tools. Aerators cause dissolution of gas in the liquid by injecting bubbles.

Chemical and metallurgic engineers rely on bubbles for operations such as distillation, absorption, flotation and spray drying. The complex processes involved often require consideration for mass and heat transfer, and are modelled using fluid dynamics.[2]

The star-nosed mole and the water shrew can smell underwater by rapidly breathing through their nostrils and creating a bubble. [3]

When bubbles are disturbed, they pulsate (that is, they oscillate in size) at their natural frequency. Large bubbles (negligible surface tension and thermal conductivity) undergo adiabatic pulsations, which means that no heat is transferred either from the liquid to the gas or vice versa. The natural frequency of such bubbles is determined by the equation:[4][5]

Excited bubbles trapped underwater are the major source of liquid sounds, such as when a rain droplet impacts a surface of water.[6][7]

Injury by bubble formation and growth in body tissues is the mechanism of decompression sickness, which occurs when supersaturated dissolved inert gases leave solution as bubbles during decompression. The damage can be due to mechanical deformation of tissues due to bubble growth in situ, or by blocking blood vessels where the bubble has lodged.

Arterial gas embolism can occur when a gas bubble is introduced to the circulatory system and it lodges in a blood vessel which is too small for it to pass through under the available pressure difference. This can occur as a result of decompression after hyperbaric exposure, a lung overexpansion injury, during intravenous fluid administration, or during surgery.