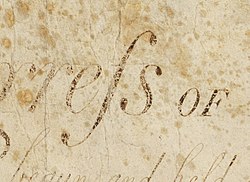 The long, medial, or descending s (ſ) is a form of the minuscule letter s, which was formerly used where s occurred in the middle or at the beginning of a word (e.g. "ſinfulneſs" "sinfulness"). The modern letterform was called the terminal, round, or short s. 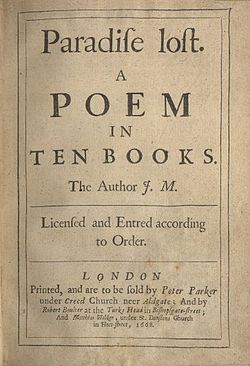 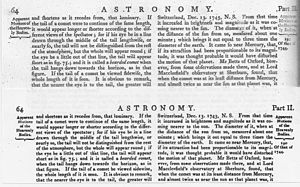 5th edition of Encyclopaedia Britannica, 1817, top, compared to the 6th edition of 1823; the only change was the removal of the long s from the font

The long s was derived from the old Roman cursive medial s. When the distinction between majuscule (uppercase) and minuscule (lowercase) letter forms became established, toward the end of the eighth century, it developed a more vertical form.[1] During this period, it was occasionally used at the end of a word, a practice that quickly died but that was occasionally revived in Italian printing between about 1465 and 1480. Thus, the general rule that the long s "never occurred at the end of a word" is not strictly correct, although the exceptions are rare and archaic. The double s in the middle of a word was often written with a long s and a short s, as in Miſsiſsippi.[2] In German blackletter, the rules are more complicated: short s also appears at the end of each component within a compound word.

The long s is often confused with the minuscule f, sometimes even having an f-like nub at its middle, but on the left side only, in various Roman typefaces and in blackletter. There was no nub in its italic typeform, which gave the stroke a descender that curled to the left and which is not possible without kerning in the other typeforms mentioned. For this reason, the short s was also normally used in combination with f: for example, in "ſatisfaction".

The nub acquired its form in the blackletter style of writing. What looks like one stroke was actually a wedge pointing downward. The wedge's widest part was at that height (x-height), and capped by a second stroke that formed an ascender that curled to the right. Those styles of writing and their derivatives in type design had a cross-bar at the height of the nub for letters f and t, as well as for k. In Roman type, except for the cross bar on medial s, all other cross bars disappeared.

The long s was used in ligatures in various languages. Three examples were for si, ss, and st, besides the German letter ß. The long s survives in Fraktur typefaces.

Greek sigma also features an initial/medial σ and a final ς, which may have supported the idea of such specialized s forms. In Renaissance Europe a significant fraction of the literate class was familiar with Ancient Greek.

The present-day German letter ß (Eszett or scharfes S in German; also used in Low German and historical Upper Sorbian orthographies) is considered to have originated in a ligature of ſz (which is supported by the fact that the second part of the ß glyph usually resembles a Fraktur z), or ſs (see ß for more), or some Tironian notes.[3]

Some old orthographic systems of Slavonic and Baltic languages used ſ and s as two separate letters with different phonetic values. For example, the Bohorič alphabet of the Slovene language included ſ /s/, s /z/, ſh /ʃ/, sh /ʒ/. In the original version of the alphabet, majuscule S was shared by both letters; later a modified character Ş became the counterpart of ſ.

Also, some Latin alphabets devised in the 1920s for some Caucasian languages used the ſ for some specific sounds.[4] These orthographies were in actual use until 1938.[5] Some of these had developed a capital form which roughly resembles a smoothed variant of the letter Template:Unichar. 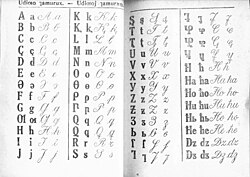 Udi alphabet table from a 1934 book, showing a capital long s near the end of the 3rd column

In general, the long s fell out of use in Roman and italic typefaces in professional printing well before the middle of the 19th century. It “rarely appears in good quality London printing after 1800, though it lingers provincially till 1824, and is found in handwriting into the second half of the nineteenth century"[6] as well as in printed collections of sermons.

Abandonment by printers and typefounders

The long s disappeared from new fonts rapidly in the mid-1790s, and most printers who could afford to do so had discarded older fonts by the early years of the 19th century. Pioneer of type design John Bell (1746–1831), who started the British Letter Foundry in 1788, commissioned William Caslon to produce a new modern font for him and is often “credited with the demise of the long s."[7]

The 1808 Printer’s Grammar describes the transition away from the use of the long s among typefounders and printers in its list of available sorts:

The introduction of the round s, instead of the long, is an improvement in the art of printing equal, if not superior, to any which has taken place in recent years, and for which we are indebted to the ingenious Mr. Bell, who introduced them in his edition of the British Classics [published in the 1780s and 1790s]. They are now generally adopted, and the [typefounders] scarcely ever cast a long s to their fonts, unless particularly ordered. Indeed, they omit it altogether in their specimens.... They are placed in our list of sorts, not to recommend them, but because we may not be subject to blame from those of the old school, who are tenacious of deviating from custom, however antiquated, for giving a list which they might term imperfect."[8]

An individual instance of an important work using s instead of the long s occurred in 1749, with Joseph Ames’ Typographical Antiquities, about printing in England 1471–1600, but “the general abolition of long s began with John Bell's British Theatre (1791).”[9]

In Spain, the change was mainly accomplished between the years 1760 and 1766; for example, the multi-volume España Sagrada made the switch with volume 16 (1762). In France, the change occurred between 1782 and 1793. Printers in the United States stopped using the long s between 1795 and 1810: for example, acts of Congress were published with the long s throughout 1803, switching to the short s in 1804. In the U.S., a late use of the long s was in Low's Encyclopaedia, which was published between 1805 and 1811. Its reprint in 1816 was one of the last such uses in America. And the statutes of the United Kingdom's colony Nova Scotia also used the long s as late as 1816. Some examples of the use of the long and short s among specific well-known typefaces and publications in the UK include the following:

Early editions of Scottish poet Robert Burns that have lost their title page can be dated by their use of the long s; that is, Dr. James Currie's edition of the Works of Robert Burns (Liverpool, 1800 and many reprintings) does not use the long s, while editions from the 1780s and early 1790s do. In printing, instances of the long s continue in rare and sometimes notable cases in the U.K. until the end of the 19th century, possibly as part of a consciously antiquarian revival of old-fashioned type. For example,

Eventual abandonment of the long s in handwriting

After its decline and disappearance in printing in the early years of the 19th century, the long s persisted into the second half of the century in manuscript. In handwriting used for correspondence and diaries, its use for a single s seems to have disappeared first: most manuscript examples from the 19th century use it for the first in a double s. For example,

For these as well as others, the handwritten long s may have suggested type and a certain formality as well as the traditional. Margaret Mathewson “published” her Sketch of 8 Months a Patient in the Royal Infirmary of Edinburgh, A.D. 1877 of her experiences as a patient of Joseph Lister in the Royal Infirmary of Edinburgh by writing copies out in manuscript.[20] In place of the first s in a double s Mathewson recreated the long s in these copies, a practice widely used for both personal and business correspondence by her family, who lived on the remote island of Yell, Shetland. The practice of using the long s in handwriting on Yell, as elsewhere, may have been a carryover from 18th-century printing conventions, but it was not unfamiliar as a convention in handwriting. 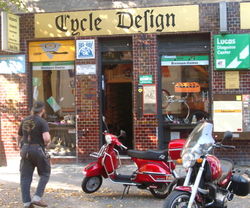 The long s survives in elongated form, with an italic-styled curled descender, as the integral symbol ∫ used in calculus; Gottfried Wilhelm von Leibniz based the character on the Latin summa "sum", which he wrote ſumma. This use first appeared publicly in his paper De Geometria, published in Acta Eruditorum of June 1686,[21] but he had been using it in private manuscripts at least since 1675.[22] The following represents the integral of a function of x over the interval [a,b]:

In linguistics, a similar character (ʃ, called "esh"), is used in the International Phonetic Alphabet, in which it represents the voiceless postalveolar fricative, the first sound in the English word shun.

In Scandinavian and German-speaking countries, relics of the long s continue to be seen in signs and logos that use various forms of fraktur typefaces. Examples include the logos of the Norwegian newspapers Aftenpoſten and Adresſeaviſen; the packaging logo for Finnish Siſu pastilles; and the Jägermeiſter logo.

The long s exists in some current OpenType digital fonts that are historic revivals, like Caslon, Garamond, and Bodoni.[23]

Another survival of the long s was the abbreviation used in British English for shilling, as in "5∕–", where the shilling mark "∕" stood in for the long s, which had been long forgotten by all but antiquarians.[24]

The similarity between the printed long s (ſ) and f and modern-day unfamiliarity with the former letter-form has been the subject of much humour based on the intentional misreading of s as f, e.g. pronouncing Greensleeves as Greenfleeves and song as fong in a Flanders and Swann monologue[25] or mispronouncing "pursuit of happiness" as "purfuit of happinefs", as the character of Benjamin Franklin did in Stan Freberg's skit, "The Declaration of Independence, or, A Man Can't Be Too Careful What He Signs These Days" from Stan Freberg Presents the United States of America, Volume One.