Louis-Victor-Pierre-Raymond, 7th duc de Broglie (Template:IPAc-en; Template:IPA-fr[1][2] or Template:IPA-fr; 15 August 1892 – 19 March 1987) was a French physicist who made groundbreaking contributions to quantum theory. In his 1924 PhD thesis he postulated the wave nature of electrons and suggested that all matter has wave properties. This concept is known as the de Broglie hypothesis, an example of wave-particle duality, and forms a central part of the theory of quantum mechanics.

De Broglie won the Nobel Prize for Physics in 1929, after the wave-like behaviour of matter was first experimentally demonstrated in 1927.

The 1925's pilot-wave picture,[3] and the wave-like behaviour of particles discovered by de Broglie was used by Erwin Schrödinger in his formulation of wave mechanics.[4] The pilot-wave model and interpretation was then abandoned, in favor of the quantum formalism, until 1952 when it was rediscovered and enhanced by David Bohm.

Louis de Broglie was the sixteenth member elected to occupy seat 1 of the Académie française in 1944, and served as Perpetual Secretary of the French Academy of Sciences.[5][6]

De Broglie had intended a career in humanities, and received his first degree in history. Afterwards, though, he turned his attention toward mathematics and physics and received a degree in physics. With the outbreak of the First World War in 1914, he offered his services to the army in the development of radio communications.

His 1924 thesis Recherches sur la théorie des quanta (Research on the Theory of the Quanta) introduced his theory of electron waves. This included the wave–particle duality theory of matter, based on the work of Max Planck and Albert Einstein on light. The thesis examiners, unsure of the material, passed his thesis to Einstein for evaluation. Einstein endorsed his wave–particle duality proposal wholeheartedly; de Broglie was awarded his doctorate. This research culminated in the de Broglie hypothesis stating that any moving particle or object had an associated wave. De Broglie thus created a new field in physics, the mécanique ondulatoire, or wave mechanics, uniting the physics of energy (wave) and matter (particle). For this he won the Nobel Prize in Physics in 1929.

In his later career, de Broglie worked to develop a causal explanation of wave mechanics, in opposition to the wholly probabilistic models which dominate quantum mechanical theory; it was refined by David Bohm in the 1950s. The theory has since been known as the De Broglie–Bohm theory.

In addition to strictly scientific work, de Broglie thought and wrote about the philosophy of science, including the value of modern scientific discoveries.

De Broglie became a member of the Académie des sciences in 1933, and was the academy's perpetual secretary from 1942. He was asked to join Le Conseil de l'Union Catholique des Scientifiques Francais, but declined due to the fact that he was non-religious.[7]

On 12 October 1944, he was elected to the Académie française, replacing mathematician Émile Picard. Because of the deaths and imprisonments of Académie members during the occupation and other effects of the war, the Académie was unable to meet the quorum of twenty members for his election; due to the exceptional circumstances, however, his unanimous election by the seventeen members present was accepted. In an event unique in the history of the Académie, he was received as a member by his own brother Maurice, who had been elected in 1934. UNESCO awarded him the first Kalinga Prize in 1952 for his work in popularizing scientific knowledge, and he was elected a Foreign Member of the Royal Society on 23 April 1953.[8]

In 1961 he received the title of Knight of the Grand Cross in the Légion d'honneur. De Broglie was awarded a post as counselor to the French High Commission of Atomic Energy in 1945 for his efforts to bring industry and science closer together. He established a center for applied mechanics at the Henri Poincaré Institute, where research into optics, cybernetics, and atomic energy were carried out. He inspired the formation of the International Academy of Quantum Molecular Science and was an early member.

{{#invoke:main|main}} "The fundamental idea of [my 1924 thesis] was the following: The fact that, following Einstein's introduction of photons in light waves, one knew that light contains particles which are concentrations of energy incorporated into the wave, suggests that all particles, like the electron, must be transported by a wave into which it is incorporated... My essential idea was to extend to all particles the coexistence of waves and particles discovered by Einstein in 1905 in the case of light and photons." "With every particle of matter with mass m and velocity v a real wave must be 'associated'", related to the momentum by the equation:

is the Planck constant,

is the rest mass,

is the velocity and

is the speed of light in a vacuum."

This theory set the basis of wave mechanics. It was supported by Einstein, confirmed by the electron diffraction experiments of Davisson and Germer, and generalized by the work of Schrödinger.

However, this generalization was statistical and was not approved of by de Broglie, who said "that the particle must be the seat of an internal periodic movement and that it must move in a wave in order to remain in phase with it was ignored by the actual physicists [who are] wrong to consider a wave propagation without localization of the particle, which was quite contrary to my original ideas."

From a philosophical viewpoint, this theory of matter-waves has contributed greatly to the ruin of the atomism of the past. Originally, de Broglie thought that real wave (i.e., having a direct physical interpretation) was associated with particles. In fact, the wave aspect of matter was formalized by a wavefunction defined by the Schrödinger equation, which is a pure mathematical entity having a probabilistic interpretation, without the support of real physical elements. This wavefunction gives an appearance of wave behavior to matter, without making real physical waves appear. However, until the end of his life de Broglie returned to a direct and real physical interpretation of matter-waves, following the work of David Bohm. The de Broglie–Bohm theory is today the only interpretation giving real status to matter-waves and representing the predictions of quantum theory.

{{safesubst:#invoke:anchor|main}} Conjecture of an internal clock of the electron

In his 1924 thesis, de Broglie conjectured that the electron has an internal clock that constitutes part of the mechanism by which a pilot wave guides a particle.[9] Subsequently David Hestenes has proposed a link to the Zitterbewegung that was suggested by Erwin Schrödinger.[10]

Attempts at verifying the internal clock hypothesis and measuring clock frequency are so far not conclusive;[11] recent experimental data is at least compatible with de Broglie's conjecture.[12]

Non-nullity and variability of mass

According to de Broglie, the neutrino and the photon have rest masses that are non-zero, though very low. That a photon is not quite massless is imposed by the coherence of his theory. Incidentally, this rejection of the hypothesis of a massless photon enabled him to doubt the hypothesis of the expansion of the universe.

In addition, he believed that the true mass of particles is not constant, but variable, and that each particle can be represented as a thermodynamic machine equivalent to a cyclic integral of action.

Generalization of the principle of least action

In the second part of his 1924 thesis, de Broglie used the equivalence of the mechanical principle of least action with Fermat's optical principle: "Fermat's principle applied to phase waves is identical to Maupertuis' principle applied to the moving body; the possible dynamic trajectories of the moving body are identical to the possible rays of the wave." This equivalence had been pointed out by Hamilton a century earlier, and published by him around 1830, in an era where no experience gave proof of the fundamental principles of physics being involved in the description of atomic phenomena.

Up to his final work, he appeared to be the physicist who most sought that dimension of action which Max Planck, at the beginning of the 20th century, had shown to be the only universal unity (with his dimension of entropy).

Duality of the laws of nature

Far from claiming to make "the contradiction disappear" which Max Born thought could be achieved with a statistical approach, de Broglie extended wave–particle duality to all particles (and to crystals which revealed the effects of diffraction) and extended the principle of duality to the laws of nature.

His last work made a single system of laws from the two large systems of thermodynamics and of mechanics:

When Boltzmann and his continuators developed their statistical interpretation of Thermodynamics, one could have considered Thermodynamics to be a complicated branch of Dynamics. But, with my actual ideas, it's Dynamics that appear to be a simplified branch of Thermodynamics. I think that, of all the ideas that I've introduced in quantum theory in these past years, it's that idea that is, by far, the most important and the most profound.

That idea seems to match the continuous–discontinuous duality, since its dynamics could be the limit of its thermodynamics when transitions to continuous limits are postulated. It is also close to that of Leibniz, who posited the necessity of "architectonic principles" to complete the system of mechanical laws.

However, according to him, there is less duality, in the sense of opposition, than synthesis (one is the limit of the other) and the effort of synthesis is constant according to him, like in his first formula, in which the first member pertains to mechanics and the second to optics:

This theory, which dates from 1934, introduces the idea that the photon is equivalent to the fusion of two Dirac neutrinos.

It shows that the movement of the center of gravity of these two particles obeys the Maxwell equations—that implies that the neutrino and the photon both have rest masses that are non-zero, though very low.

De Broglie's final idea was the hidden thermodynamics of isolated particles. It is an attempt to bring together the three furthest principles of physics: the principles of Fermat, Maupertuis, and Carnot.

In this work, action becomes a sort of opposite to entropy, through an equation that relates the only two universal dimensions of the form:

As a consequence of its great impact, this theory brings back the uncertainty principle to distances around extrema of action, distances corresponding to reductions in entropy. 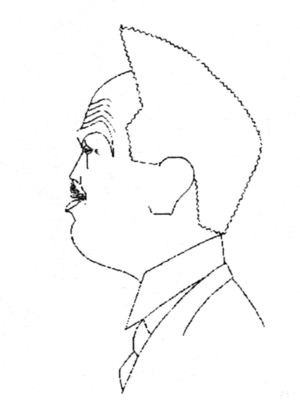