In radio, multiple-input and multiple-output, or MIMO (pronounced as "my-moh" or "me-moh"), is the use of multiple antennas at both the transmitter and receiver to improve communication performance. Multiple antennas may be used to perform smart antenna functions such as spreading the total transmit power over the antennas to achieve an array gain that incrementally improves the spectral efficiency (more bits per second per hertz of bandwidth,) or achieving a diversity gain that improves the link reliability (reduces fading,) or both. However, today the term “MIMO” usually refers to a method for multiplying the capacity of a radio link by exploiting multipath propagation.[1] This modern MIMO is an essential element of wireless communication standards such as IEEE 802.11n (Wi-Fi), IEEE 802.11ac (Wi-Fi), 4G, 3GPP Long Term Evolution, WiMAX and HSPA+. More recently, MIMO has been applied to power line communications for 3-wire installations as part of standard ITU G.hn and specification HomePlug AV2.[2][3]

The multi-user MIMO concept of space-division multiple access (SDMA) was proposed by Richard Roy and Björn Ottersten, researchers at ArrayComm, in 1991. Their US patent (No. 5515378 issued in 1996[6]) emphasizes "an array of receiving antennas at the base station" and "plurality of remote users".

Arogyaswami Paulraj and Thomas Kailath proposed a multiplexing technique based on spatial filtering in 1993. Their US patent (No. 5,345,599 issued in 1994[7]) described a method of broadcasting at high data rates by splitting a high-rate signal "into several low-rate signals" to be transmitted from “spatially separated transmitters” and recovered by the receive antenna array based on differences in “directions-of-arrival.”

A paper by Emre Telatar written in 1995 explored the impact of multiple transmit and multiple receive antennas on capacity.[8]

Greg Raleigh was first to propose in a paper (April 1996) and subsequent patent that natural multipath propagation can be exploited to transmit multiple, independent information streams using co-located antennas and multi-dimensional signals.[9] Later that year (September 1996) Gerard J. Foschini submitted a paper that also suggested it is possible to multiply the capacity of a wireless link using what the author described as “layered space-time architecture.”[10]

MIMO can be sub-divided into three main categories, precoding, spatial multiplexing or SM, and diversity coding.

Precoding is multi-stream beamforming, in the narrowest definition. In more general terms, it is considered to be all spatial processing that occurs at the transmitter. In (single-stream) beamforming, the same signal is emitted from each of the transmit antennas with appropriate phase and gain weighting such that the signal power is maximized at the receiver input. The benefits of beamforming are to increase the received signal gain - by making signals emitted from different antennas add up constructively - and to reduce the multipath fading effect. In line-of-sight propagation, beamforming results in a well-defined directional pattern. However, conventional beams are not a good analogy in cellular networks, which are mainly characterized by multipath propagation. When the receiver has multiple antennas, the transmit beamforming cannot simultaneously maximize the signal level at all of the receive antennas, and precoding with multiple streams is often beneficial. Note that precoding requires knowledge of channel state information (CSI) at the transmitter and the receiver. 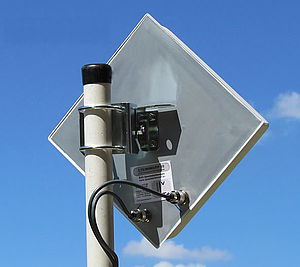 Example of an antenna for LTE with 2 ports antenna diversity

Multi-antenna MIMO (or Single user MIMO) technology has been developed and implemented in some standards, e.g., 802.11n products. 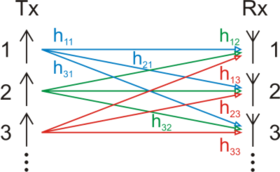 In MIMO systems, a transmitter sends multiple streams by multiple transmit antennas. The transmit streams go through a matrix channel which consists of all

transmit antennas at the transmitter and

are the receive and transmit vectors, respectively, and

are the channel matrix and the noise vector, respectively.

Referring to information theory, the ergodic channel capacity of MIMO systems where both the transmitter and the receiver have perfect instantaneous channel state information is[20]

is the ratio between transmit power and noise power (i.e., transmit SNR). The optimal signal covariance

is achieved through singular value decomposition of the channel matrix

. The optimal power allocation is achieved through waterfilling,[21] that is

are the diagonal elements of

is zero if its argument is negative, and

is selected such that

If the transmitter has only statistical channel state information, then the ergodic channel capacity will decrease as the signal covariance

The spatial correlation of the channel has a strong impact on the ergodic channel capacity with statistical information.

to maximize channel capacity under worst-case statistics, which means

Depending on the statistical properties of the channel, the ergodic capacity is no greater than

times larger than that of a SISO system.

MIMO signal testing focuses first on the transmitter/receiver system. The random phases of the sub-carrier signals can produce instantaneous power levels that cause the amplifier to compress, momentarily causing distortion and ultimately symbol errors. Signals with a high PAR (peak-to-average ratio) can cause amplifiers to compress unpredictably during transmission. OFDM signals are very dynamic and compression problems can be hard to detect because of their noise-like nature.[22]

Knowing the quality of the signal channel is also critical. A channel emulator can simulate how a device performs at the cell edge, can add noise or can simulate what the channel looks like at speed. To fully qualify the performance of a receiver, a calibrated transmitter, such as a vector signal generator (VSG), and channel emulator can be used to test the receiver under a variety of different conditions. Conversely, the transmitter's performance under a number of different conditions can be verified using a channel emulator and a calibrated receiver, such as a vector signal analyzer (VSA).

Papers by Gerard J. Foschini and Michael J. Gans,[24] Foschini[25] and Emre Telatar[8] have shown that the channel capacity (a theoretical upper bound on system throughput) for a MIMO system is increased as the number of antennas is increased, proportional to the smaller of the number of transmit antennas and the number of receive antennas. This is known as the multiplexing gain and this basic finding in information theory is what led to a spurt of research in this area. Despite the simple propagation models used in the aforementioned seminal works, the multiplexing gain is a fundamental property that can be proved under almost any physical channel propagation model and with practical hardware that is prone to transceiver impairments.[26]

A textbook by A. Paulraj, R. Nabar and D. Gore has published an introduction to this area.[27] There are many other principal textbooks available as well.[28][29][30] Mobile Experts has published a research report which predicts the use of MIMO technology in 500 million PCs, tablets, and smartphones by 2016.

Given the nature of MIMO, it is not limited to wireless communication. It can be used for wire line communication as well. For example, a new type of DSL technology (gigabit DSL) has been proposed based on binder MIMO channels.