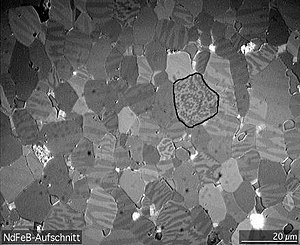 Several grains of NdFeB with magnetic domains made visible via contrast with a Kerr-microscope.

Light that is reflected from a magnetized surface can change in both polarization and reflected intensity. The effect is similar to the Faraday effect: the Faraday effect describes changes to light transmitted through a magnetic material, while the Kerr effect describes changes to light reflected from a magnetic surface. Both effects result from the off-diagonal components of the dielectric tensor

. These off-diagonal components give the magneto-optic material an anisotropic permittivity, meaning that its permittivity is different in different directions. The permittivity affects the speed of light in a material:

is the velocity of light through the material,

is the material permittivity, and

is the magnetic permeability; and thus the speed of light varies depending on its orientation. This causes fluctuations in the phase of polarized incident light.

MOKE can be further categorized by the direction of the magnetization vector with respect to the reflecting surface and the plane of incidence.

When the magnetization vector is perpendicular to the reflection surface and parallel to the plane of incidence, the effect is called the polar Kerr effect. To simplify the analysis, near normal incidence is usually employed when doing experiments in the polar geometry.

and the Kerr coefficient

When the magnetization is perpendicular to the plane of incidence and parallel to the surface it is said to be in the transverse configuration. In this case, the incident light is also not normal to the reflection surface but instead of measuring the polarity of the light after reflection, the reflectivity

is measured. This change in reflectivity is proportional to the component of magnetization that is perpendicular to the plane of incidence and parallel to the surface, as above. If the magnetization component points to the right of the incident plane, as viewed from the source, then the Kerr vector adds to the Fresnel amplitude vector and the intensity of the reflected light is

. On the other hand, if the component of magnetization component points to the left of the incident plane as viewed from the source, the Kerr vector subtracts from the Fresnel amplitude and the reflected intensity is given by

In addition to the polar, longitudinal and transverse Kerr effect which depend linearly on the respective magnetization components, there are also higher order quadratic effects, for which the Kerr angle depends on product terms involving the polar, longitudinal and transverse magnetization components. Those effects are referred to as Voigt effect or quadratic Kerr effect. Quadratic magneto-optic Kerr effect (QMOKE) is found strong in Heusler alloys such as Co2FeSi and Co2MnGe[1] [2] 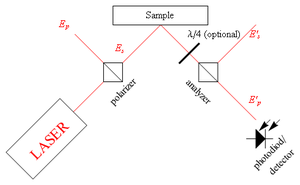 A Kerr microscope relies on the MOKE in order to image differences in the magnetization on a surface of magnetic material. In a Kerr microscope, the illuminating light is first passed through a polarizer filter, then reflects from the sample and passes through an analyzer polarizing filter, before going through a regular optical microscope. Because the different MOKE geometries require different polarized light, the polarizer should have the option to change the polarization of the incident light (circular, linear, and elliptical). When the polarized light is reflected off the sample material, a change in any combination of the following may occur: Kerr rotation, Kerr ellipticity, or polarized amplitude. The changes in polarization are converted by the analyzer into changes in light intensity, which are visible. A computer system is often used to create an image of the magnetic field on the surface from these changes in polarization.

Magneto Optical (MO) Drives were introduced in 1985. MO discs were written using a laser and an electromagnet. The laser would heat the platter above its Curie temperature at which point the electromagnet would orient that bit as a 1 or 0. To read, the laser is operated at a lower intensity, and emits polarized light. Reflected light is analyzed showing a noticeable difference between a 0 or 1.