All matter can exhibit wave-like behaviour. For example a beam of electrons can be diffracted just like a beam of light or a water wave. Matter waves are a central part of the theory of quantum mechanics, an example of wave–particle duality. The concept that matter behaves like a wave is also referred to as the de Broglie hypothesis (Template:IPAc-en) due to having been proposed by Louis de Broglie in 1924.[1] Matter waves are often referred to as de Broglie waves.

The de Broglie wavelength is the wavelength, λ, associated with a particle and is related to its momentum, p, through the Planck constant, h:

At the end of the 19th century, light was thought to consist of waves of electromagnetic fields which propagated according to Maxwell’s equations, while matter was thought to consist of localized particles (See history of wave and particle viewpoints). In 1900, this division was exposed to doubt, when, investigating the theory of black body thermal radiation, Max Planck proposed that light is emitted in discrete quanta of energy. It was thoroughly challenged in 1905. Extending Planck's investigation in several ways, including its connection with the photoelectric effect, Albert Einstein proposed that light is also propagated and absorbed in quanta. Light quanta are now called photons. These quanta would have an energy

(lowercase Greek letter lambda) denote the frequency and wavelength of the light, c the speed of light, and h Planck’s constant.[2] In the modern convention, frequency is symbolized by f as is done in the rest of this article. Einstein’s postulate was confirmed experimentally by Robert Millikan and Arthur Compton over the next two decades. 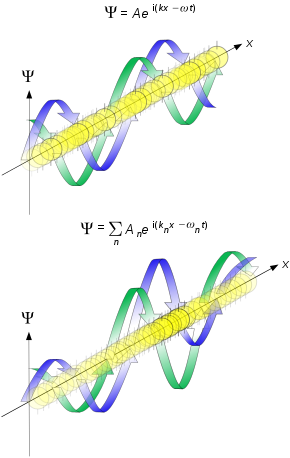 Propagation of de Broglie waves in 1d – real part of the complex amplitude is blue, imaginary part is green. The probability (shown as the colour opacity) of finding the particle at a given point x is spread out like a waveform, there is no definite position of the particle. As the amplitude increases above zero the curvature decreases, so the amplitude decreases again, and vice versa – the result is an alternating amplitude: a wave. Top: plane wave. Bottom: wave packet.

De Broglie, in his 1924 PhD thesis, proposed that just as light has both wave-like and particle-like properties, electrons also have wave-like properties. The wavelength, λ, associated with an electron is related to its momentum, p, through the Planck constant, h:[3]

The relationship is now known to hold for all types of matter: all matter exhibits properties of both particles and waves.

In 1926, Erwin Schrödinger published an equation describing how a matter wave should evolve—the matter wave analogue of Maxwell’s equations—and used it to derive the energy spectrum of hydrogen.

Matter waves were first experimentally confirmed to occur in the Davisson-Germer experiment for electrons, and the de Broglie hypothesis has been confirmed for other elementary particles. Furthermore, neutral atoms and even molecules have been shown to be wave-like.

Template:Rellink In 1927 at Bell Labs, Clinton Davisson and Lester Germer fired slow-moving electrons at a crystalline nickel target. The angular dependence of the diffracted electron intensity was measured, and was determined to have the same diffraction pattern as those predicted by Bragg for x-rays. Before the acceptance of the de Broglie hypothesis, diffraction was a property that was thought to be only exhibited by waves. Therefore, the presence of any diffraction effects by matter demonstrated the wave-like nature of matter. When the de Broglie wavelength was inserted into the Bragg condition, the observed diffraction pattern was predicted, thereby experimentally confirming the de Broglie hypothesis for electrons.[5]

This was a pivotal result in the development of quantum mechanics. Just as the photoelectric effect demonstrated the particle nature of light, the Davisson–Germer experiment showed the wave-nature of matter, and completed the theory of wave-particle duality. For physicists this idea was important because it means that not only can any particle exhibit wave characteristics, but that one can use wave equations to describe phenomena in matter if one uses the de Broglie wavelength.

Template:Rellink Experiments with Fresnel diffraction[6] and an atomic mirror for specular reflection[7][8] of neutral atoms confirm the application of the de Broglie hypothesis to atoms, i.e. the existence of atomic waves which undergo diffraction, interference and allow quantum reflection by the tails of the attractive potential.[9] Advances in laser cooling have allowed cooling of neutral atoms down to nanokelvin temperatures. At these temperatures, the thermal de Broglie wavelengths come into the micrometre range. Using Bragg diffraction of atoms and a Ramsey interferometry technique, the de Broglie wavelength of cold sodium atoms was explicitly measured and found to be consistent with the temperature measured by a different method.[10]

This effect has been used to demonstrate atomic holography, and it may allow the construction of an atom probe imaging system with nanometer resolution.[11][12] The description of these phenomena is based on the wave properties of neutral atoms, confirming the de Broglie hypothesis.

The effect has also been used to explain the spatial version of the quantum Zeno effect, in which an otherwise unstable object may be stabilised by rapidly-repeated observations.[8]

Recent experiments even confirm the relations for molecules and even macromolecules, which are normally considered too large to undergo quantum mechanical effects. In 1999, a research team in Vienna demonstrated diffraction for molecules as large as fullerenes.[13] The researchers calculated a De Broglie wavelength of the most probable C60 velocity as 2.5 pm. More recent experiments prove the quantum nature of molecules with a mass up to 6910 amu.[14]

The de Broglie equations relate the wavelength λ to the momentum p, and frequency f to the total energy E of a particle:[15]

where h is Planck's constant. The equations can also be written as

is the reduced Planck's constant,

is the wave vector, and

is the angular frequency.

In each pair, the second equation is also referred to as the Planck-Einstein relation, since it was also proposed by Planck and Einstein.

Using two formulas from special relativity, one for the relativistic momentum and one for the energy

allows the equations to be written as

the Lorentz factor, and

Albert Einstein first explained the wave–particle duality of light in 1905. Louis de Broglie hypothesized that any particle should also exhibit such a duality. The velocity of a particle, he concluded, should always equal the group velocity of the corresponding wave. The magnitude of the group velocity is equal to the particle's speed.

Both in relativistic and non-relativistic quantum physics, we can identify the group velocity of a particle's wave function with the particle velocity. Quantum mechanics has very accurately demonstrated this hypothesis, and the relation has been shown explicitly for particles as large as molecules.{{ safesubst:#invoke:Unsubst||date=__DATE__ |$B= {{#invoke:Category handler|main}}{{#invoke:Category handler|main}}[citation needed] }}

De Broglie deduced that if the duality equations already known for light were the same for any particle, then his hypothesis would hold. This means that

where E is the total energy of the particle, p is its momentum, ħ is the reduced Planck constant. For a free non-relativistic particle it follows that

where m is the mass of the particle and v its velocity.

Also in special relativity we find that

is the rest mass of the particle and

is the speed of light in a vacuum. But (see below), using that the phase velocity is

where v is the velocity of the particle regardless of wave behavior.

In quantum mechanics, particles also behave as waves with complex phases. The phase velocity is equal to the product of the frequency multiplied by the wavelength.

By the de Broglie hypothesis, we see that

Using relativistic relations for energy and momentum, we have

where E is the total energy of the particle (i.e. rest energy plus kinetic energy in kinematic sense), p the momentum,

for any particle that has mass (according to special relativity), the phase velocity of matter waves always exceeds c, i.e.

and as we can see, it approaches c when the particle speed is in the relativistic range. The superluminal phase velocity does not violate special relativity, because phase propagation carries no energy. See the article on Dispersion (optics) for details.

The physical reality underlying de Broglie waves is a subject of ongoing debate. Some theories treat either the particle or the wave aspect as its fundamental nature, seeking to explain the other as an emergent property. Some, such as the hidden variable theory, treat the wave and the particle as distinct entities. Yet others propose some intermediate entity that is neither quite wave nor quite particle but only appears as such when we measure one or the other property. The Copenhagen interpretation states that the nature of the underlying reality is unknowable and beyond the bounds of scientific enquiry.

At the Fifth Solvay Conference in 1927, Max Born and Werner Heisenberg reported as follows

In 1955, Heisenberg reiterated this.

It is mentioned above that the "displaced quantity" of the Schrödinger wave has values that are dimensionless complex numbers. One may ask what is the physical meaning of those numbers. According to Heisenberg, rather than being of some ordinary physical quantity such as for example Maxwell's electric field intensity, or for example mass density, the Schrödinger-wave packet's "displaced quantity" is probability amplitude.[24] The probability amplitude supports calculation of probability of location or momentum of discrete particles. Heisenberg recites Duane's account of particle diffraction by probabilistic quantal translation momentum transfer, which allows, for example in Young's two-slit experiment, each diffracted particle probabilistically to pass discretely through a particular slit.[25] Thus one does not need necessarily think of the matter wave, as it were, as 'composed of smeared matter'.

De Broglie's thesis started from the hypothesis, "that to each portion of energy with a proper mass m0 one may associate a periodic phenomenon of the frequency ν0 , such that one finds: hν0 = m0c2. The frequency ν0 is to be measured, of course, in the rest frame of the energy packet. This hypothesis is the basis of our theory."[26][27][28][29][30][31]

De Broglie followed his initial hypothesis of a periodic phenomenon, with frequency ν0 , associated with the energy packet. He used the special theory of relativity to find, in the frame of the observer of the electron energy packet that is moving with velocity

, that its frequency was apparently reduced to

using the same notation as above. The quantity

is the velocity of what de Broglie called the "phase wave". Its wavelength is

. De Broglie reasoned that his hypothetical intrinsic particle periodic phenomenon is in phase with that phase wave. This was his basic matter wave conception. He noted, as above, that

While the concept of waves being associated with matter is correct, de Broglie did not leap directly to the final understanding of quantum mechanics with no missteps. There are conceptual problems with the approach that de Broglie took in his thesis that he was not able to resolve, despite trying a number of different fundamental hypotheses in different papers published while working on, and shortly after publishing, his thesis.[29][33] These difficulties were resolved by Erwin Schrödinger, who developed the wave mechanics approach, starting from a somewhat different basic hypothesis.