The red figure is the Minkowski sum of blue and green figures.

In geometry, the Minkowski sum (also known as dilation) of two sets of position vectors A and B in Euclidean space is formed by adding each vector in A to each vector in B, i.e., the set

Analogously, the Minkowski difference is defined as 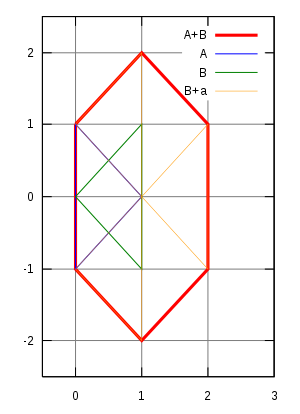 Minkowski sum A + B 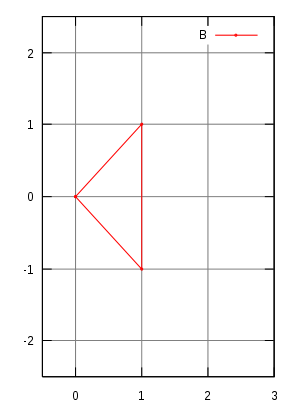 The concept is named for Hermann Minkowski.

For example, if we have two sets A and B, each consisting of three position vectors (informally, three points), representing the vertices of two triangles in

For Minkowski addition, the zero set {0}, containing only the zero vector 0, is an identity element: For every subset S, of a vector space 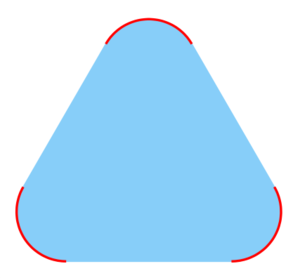 In the convex hull of the red set, each blue point is a convex combination of some red points.

Minkowski addition behaves well with respect to the operation of taking convex hulls, as shown by the following proposition:

In mathematical terminology, the operations of Minkowski summation and of forming convex hulls are commuting operations.[1][2]

If Template:Mvar is a convex set then also

is a convex set; furthermore

Conversely, if this "distributive property" holds for all non-negative real numbers,

The figure shows an example of a non-convex set for which A + A ⊋ 2A.

Minkowski addition plays a central role in mathematical morphology. It arises in the brush-and-stroke paradigm of 2D computer graphics (with various uses, notably by Donald E. Knuth in Metafont), and as the solid sweep operation of 3D computer graphics.

Minkowski sums are used in motion planning of an object among obstacles. They are used for the computation of the configuration space, which is the set of all admissible positions of the object. In the simple model of translational motion of an object in the plane, where the position of an object may be uniquely specified by the position of a fixed point of this object, the configuration space are the Minkowski sum of the set of obstacles and the movable object placed at the origin and rotated 180 degrees.

In numerical control machining, the programming of the NC tool exploits the fact that the Minkowski sum of the cutting piece with its trajectory gives the shape of the cut in the material. 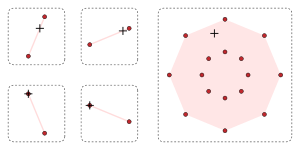 Minkowski addition and convex hulls. The sixteen dark-red points (on the right) form the Minkowski sum of the four non-convex sets (on the left), each of which consists of a pair of red points. Their convex hulls (shaded pink) contain plus-signs (+): The right plus-sign is the sum of the left plus-signs.

Two convex polygons in the plane

For two convex polygons P and Q in the plane with m and n vertices, their Minkowski sum is a convex polygon with at most m + n vertices and may be computed in time O (m + n) by a very simple procedure, which may be informally described as follows. Assume that the edges of a polygon are given and the direction, say, counterclockwise, along the polygon boundary. Then it is easily seen that these edges of the convex polygon are ordered by polar angle. Let us merge the ordered sequences of the directed edges from P and Q into a single ordered sequence S. Imagine that these edges are solid arrows which can be moved freely while keeping them parallel to their original direction. Assemble these arrows in the order of the sequence S by attaching the tail of the next arrow to the head of the previous arrow. It turns out that the resulting polygonal chain will in fact be a convex polygon which is the Minkowski sum of P and Q.

Thus, the essential Minkowski sum is defined by

where μ denotes the n-dimensional Lebesgue measure. The reason for the term "essential" is the following property of indicator functions: while

it can be seen that