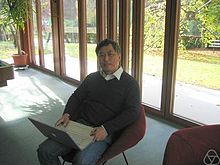 Template:Nihongo is a Japanese mathematician working in the field of complex dynamics. He is professor at Kyoto University in Japan.

Shishikura became internationally recognized[1] for two of his earliest contributions, both of which solved long-standing open problems.

For his results, he was awarded the Salem Prize in 1992, and the Iyanaga Spring Prize of the Mathematical Society of Japan in 1995.

More recent results of Shishikura include

One of the main tools pioneered by Shishikura and used throughout his work is that of quasiconformal surgery.