In differential topology, Morse theory enables one to analyze the topology of a manifold by studying differentiable functions on that manifold. According to the basic insights of Marston Morse, a typical differentiable function on a manifold will reflect the topology quite directly. Morse theory allows one to find CW structures and handle decompositions on manifolds and to obtain substantial information about their homology.

Before Morse, Arthur Cayley and James Clerk Maxwell had developed some of the ideas of Morse theory in the context of topography. Morse originally applied his theory to geodesics (critical points of the energy functional on paths). These techniques were used in Raoul Bott's proof of his periodicity theorem.

The analogue of Morse theory for complex manifolds is Picard–Lefschetz theory.

Consider, for purposes of illustration, a mountainous landscape M. If f is the function M → R sending each point to its elevation, then the inverse image of a point in R (a level set) is simply a contour line. Each connected component of a contour line is either a point, a simple closed curve, or a closed curve with a double point. Contour lines may also have points of higher order (triple points, etc.), but these are unstable and may be removed by a slight deformation of the landscape. Double points in contour lines occur at saddle points, or passes. Saddle points are points where the surrounding landscape curves up in one direction and down in the other.

Contour lines around a saddle point

Imagine flooding this landscape with water. Then, the region covered by water when the water reaches an elevation of a is f−1(−∞, a], or the points with elevation less than or equal to a. Consider how the topology of this region changes as the water rises. It appears, intuitively, that it does not change except when a passes the height of a critical point; that is, a point where the gradient of f is 0 (that is the Jacobian matrix acting as a linear map from the tangent space at that point to the tangent space at its image under the map f does not have maximal rank). In other words, it does not change except when the water either (1) starts filling a basin, (2) covers a saddle (a mountain pass), or (3) submerges a peak.

To each of these three types of critical points – basins, passes, and peaks (also called minima, saddles, and maxima) – one associates a number called the index. Intuitively speaking, the index of a critical point b is the number of independent directions around b in which f decreases. Therefore, the indices of basins, passes, and peaks are 0, 1, and 2, respectively. Rigorously, index of a critical point is the dimension of the negative-definite submatrix of the hessian matrix calculated at that point. In case of smooth maps, the hessian matrix turns out to be a diagonal matrix.

Define Ma as f−1(−∞, a]. Leaving the context of topography, one can make a similar analysis of how the topology of Ma changes as a increases when M is a torus oriented as in the image and f is projection on a vertical axis, taking a point to its height above the plane.

These figures are homotopy equivalent. 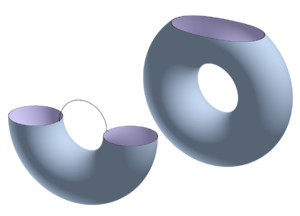 These figures are homotopy equivalent.

Starting from the bottom of the torus, let p, q, r, and s be the four critical points of index 0, 1, 1, and 2, respectively. When a is less than 0, Ma is the empty set. After a passes the level of p, when 0<a<f(q), then Ma is a disk, which is homotopy equivalent to a point (a 0-cell), which has been "attached" to the empty set. Next, when a exceeds the level of q, and f(q)<a<f(r), then Ma is a cylinder, and is homotopy equivalent to a disk with a 1-cell attached (image at left). Once a passes the level of r, and f(r)<a<f(s), then Ma is a torus with a disk removed, which is homotopy equivalent to a cylinder with a 1-cell attached (image at right). Finally, when a is greater than the critical level of s, Ma is a torus. A torus, of course, is the same as a torus with a disk removed with a disk (a 2-cell) attached.

The index of a non-degenerate critical point b of f is the dimension of the largest subspace of the tangent space to M at b on which the Hessian is negative definite. This corresponds to the intuitive notion that the index is the number of directions in which f decreases. The degeneracy and index of a critical point are independent of the choice of the local coordinate system used, as shown by Sylvester's Law.

for all i and

throughout U. Here α is equal to the index of f at b. As a corollary of the Morse lemma, one sees that non-degenerate critical points are isolated. (Regarding an extension to the complex domain see Complex Morse Lemma. For a generalization, see Morse-Palais lemma).

As indicated before, we are interested in the question of when the topology of Ma = f−1(−∞, a] changes as a varies. Half of the answer to this question is given by the following theorem.

Theorem. Suppose f is a smooth real-valued function on M, a < b, f−1[a, b] is compact, and there are no critical values between a and b. Then Ma is diffeomorphic to Mb, and Mb deformation retracts onto Ma.

It is also of interest to know how the topology of Ma changes when a passes a critical point. The following theorem answers that question.

Theorem. Suppose f is a smooth real-valued function on M and p is a non-degenerate critical point of f of index γ, and that f(p) = q. Suppose f−1[q−ε, q+ε] is compact and contains no critical points besides p. Then Mq+ε is homotopy equivalent to Mq−ε with a γ-cell attached.

These results generalize and formalize the 'rule' stated in the previous section. As was mentioned, the rule as stated is incorrect; these theorems correct it.

Morse theory can be used to prove some strong results on the homology of manifolds. The number of critical points of index γ of f : M → R is equal to the number of γ cells in the CW structure on M obtained from "climbing" f. Using the fact that the alternating sum of the ranks of the homology groups of a topological space is equal to the alternating sum of the ranks of the chain groups from which the homology is computed, then by using the cellular chain groups (see cellular homology) it is clear that the Euler characteristic

is equal to the sum

, is less than or equal to the number of critical points of index γ of a Morse function on M. These facts can be strengthened to obtain the Morse inequalities:

In particular, for any

This gives a powerful tool to study manifold topology. Suppose on a closed manifold there exists a Morse function f : M → R with precisely k critical points. In what way does the existence of the function f restrict M? The case k = 2 was studied by Reeb in 1952; Reeb sphere theorem states that M is homeomorphic to a sphere

. The case k = 3 is possible only in a small number of low dimensions, and M is homeomorphic to an Eells–Kuiper manifold.

Morse homology is a particularly easy way to understand the homology of smooth manifolds. It is defined using a generic choice of Morse function and Riemannian metric. The basic theorem is that the resulting homology is an invariant of the manifold (i.e., independent of the function and metric) and isomorphic to the singular homology of the manifold; this implies that the Morse and singular Betti numbers agree and gives an immediate proof of the Morse inequalities. An infinite dimensional analog of Morse homology is known as Floer homology.

The index is most naturally thought of as a pair

Morse–Bott functions are useful because generic Morse functions are difficult to work with; the functions one can visualize, and with which one can easily calculate, typically have symmetries. They often lead to positive-dimensional critical manifolds. Raoul Bott used Morse–Bott theory in his original proof of the Bott periodicity theorem.

Round functions are examples of Morse–Bott functions, where the critical sets are (disjoint unions of) circles.

Morse homology can also be formulated for Morse–Bott functions; the differential in Morse–Bott homology is computed by a spectral sequence. Frederic Bourgeois sketched an approach in the course of his work on a Morse–Bott version of symplectic field theory, but this work was never published due to substantial analytic difficulties.

|CitationClass=book }} A classic advanced reference in mathematics and mathematical physics.