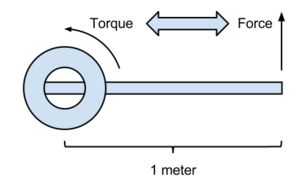 The newton metre is a unit of torque (also called "moment") in the SI system. The symbolic form is N m or N·m.[1] One newton metre, sometimes hyphenated newton-metre, is equal to the torque resulting from a force of one newton applied perpendicularly to a moment arm which is one metre long.

It is also used less commonly as a unit of work, or energy, in which case it is equivalent to the more common and standard SI unit of energy, the joule.[2] In this very different usage the metre term represents the distance travelled or displacement in the direction of the force, and not the perpendicular distance from a fulcrum as it does when used to express torque. This usage is discouraged by the SI authority, since it can lead to confusion as to whether a given quantity expressed in newton-metres is a torque or a quantity of energy. However, since torque represents energy transferred or expended per angle of revolution, one newton metre of torque is equivalent to one joule per radian.[3]

Newton metres and joules are "dimensionally equivalent" in the sense that they have the same expression in SI base units:

Again, N⋅m and J are distinguished in order to avoid misunderstandings where a torque is mistaken for an energy or vice-versa. Similar examples of "dimensionally equivalent" units include Pa versus J/m³, Bq versus Hz, and ohms versus ohms per square.